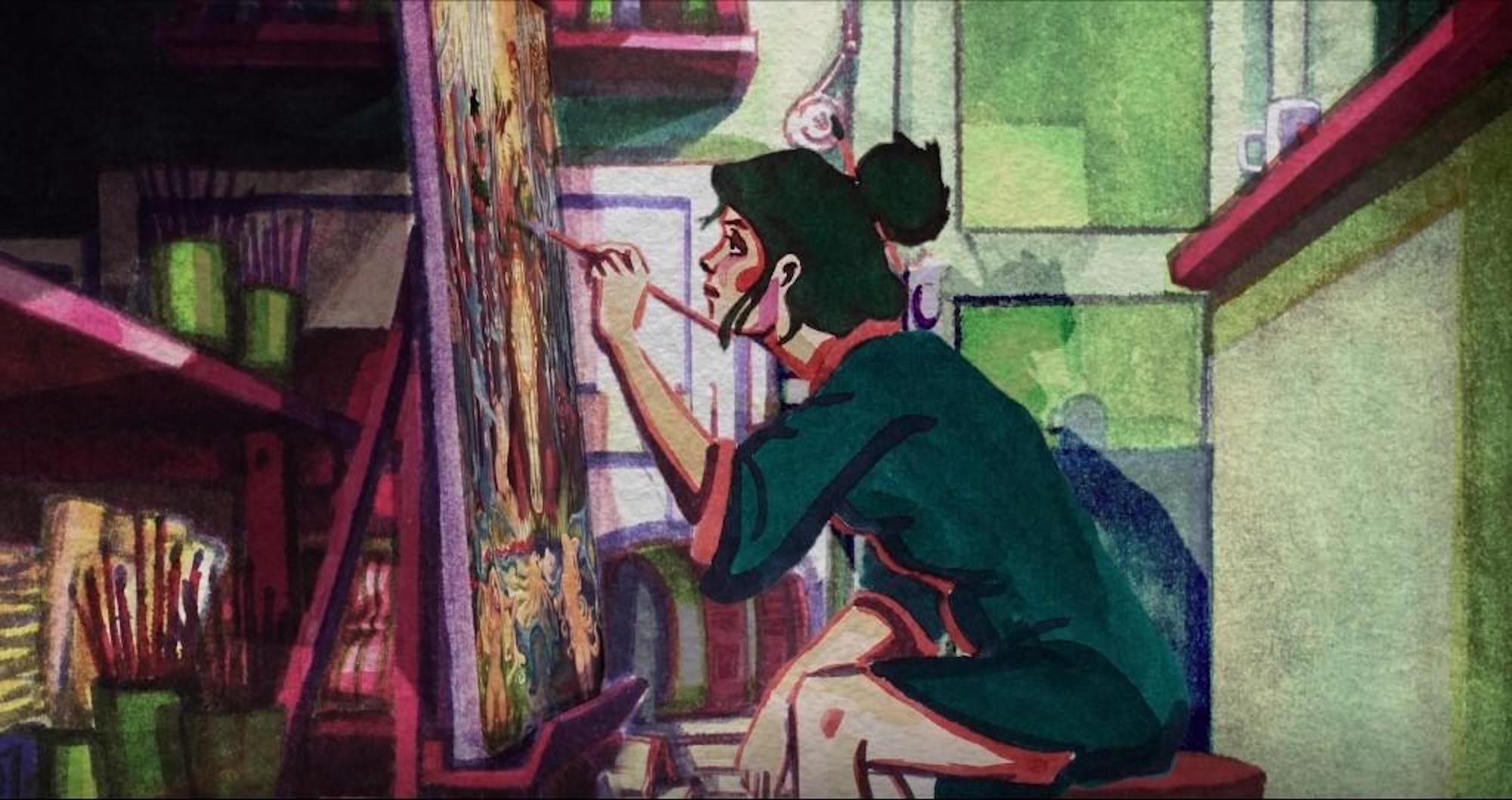 It’s a first time for us here at DN covering Annecy International Animation Festival, the world’s largest animation-specific film festival, and it certainly didn’t disappoint. The edition this year takes place from 14th to 19th June as a hybrid event with both online and in-person events. It’s a really phenomenal festival and it’s great to see work that’s both traditionally narrative and highly experimental share the same spotlight in competition. If animation is an art form without boundaries then Annecy optimises that with its diverse lineup of both filmmakers (which includes DN alum Peter Millard!) and animated forms. In regards to the larger themes and talking points of the festival, the short form work on display certainly reflected the times we’re in, with much of it in discussion with how the last year has affected us not only societally but also fundamentally regarding human nature. Having said that, there’s plenty of levity too, with films that feel timeless in their execution packed with laughter and joy to compliment the work that is more reflective and dissective. The list below hopefully reflects that, with ten standout films that are certainly worthy of your attention.

The latest animation from Academy award-winners Chistoph & Wolfgang Lauenstein is an oddball meditation on human nature. When a darkened land is given the opportunity for light, the local residents each scrounge their way to take it for themselves. Created through a stop-motion style and evoking an almost fairytale-like sensibility, the Lauensteins’ short film highlights the shortcomings of human beings and how impulsive we can be without realising. An evocative work that champions patience and understanding over greed and egoism.

Marcel Barelli’s short animated documentary takes a look into the taboo in the animal kingdom surrounding sexuality and identity. He informs the audience through a series of comedic, 2D computer-generated and hand-drawn styled animations of the ways in which animals engage in homosexuality and gender fluidity, packing each vignette with colour and vitality. At just over five minutes in length it flies by, leaving you with plenty of wonderful facts to mull over. A clever reminder of the obscenity of heteronormative standards.

Sandrine Stoïanov & Jean-Charles Finck’s latest animation is an extraordinarily beautiful work of human expression. Centring on two characters, one who is overwhelmed by being out and experiencing the world, and another who is inside yet enamoured by the world beyond her window, the directing duo capture the dichotomy of the human experience. The pair’s visual style echoes that of a traditional painting and their colour use is also really powerful with scenes from the ‘inside’ taking on a monochromatic palette and the ‘outside’ scenes densely packed with an array of shades. It’s a truly astonishing short film and a real testament to the standard set at Annecy.

I think this one might be my personal favourite of the whole festival. Belgian animator Nicolas Keppens’ short follows Jason and Kevin as they investigate an empty Chinese restaurant to hopefully capture the supposed exotic birds that have been housed there. It’s a wonderfully strange story about difficult friendships and why we can’t escape them. Keppens brings his vision to life through an acutely dry and cartoonish animation style whilst also embracing the much under-utilised tool of framing, keeping his characters in a square, locked off box as the world around them overlaps and intersects with their journey. A must-see, for sure.

If you were ever curious as to what it would be like if Yorgos Lanthimos and Ari Aster made a stop motion animation together, you’ll likely find that Hugo Covarrubias’ Beast will scratch that itch. Covarrubias’ film is a dark and macabre look at the life of a secret police agent amongst the militarised dictatorship of Chile. We witness her go about her day, interacting with her dog and silently questioning her mind and body. The animation is accompanied by a deep and tense orchestrated score too which elevates the unease at play, leading everything to come together into a film which is peculiar in the best way.

Veteran animator and graphic novelist Claude Cloutier played Annecy this year with his latest animated short Bad Seeds. Cloutier brings his trademark visual style to the film which is about two carnivorous plants which morph and evolve into different creatures and historical figures, battling each other in various bouts and conflicts. The look of Cloutier’s engraving-style animation is totally timeless and through a selection of delightful satirical imagery and a score which reflects the fumbling and rambunctious shenanigans, he is able to once again craft something wholly wonderful.

See Me is an absurdist POV short film, tracking a young girl at a party full of characterful adults. We watch through her eyes as she navigates herself through the forest of legs on display, forming a bond with a fish that’s part of the platter of food being served. Patty Stenger and Yvonne Kroese use this setup to reverse the traditional narrative that adults are clean and children are disgusting as their protagonist witnesses all the revelry going on around her. It’s very much a film about lost perspectives and empathy for those around us, and how we shouldn’t wait for them to fall before we pick them back up. 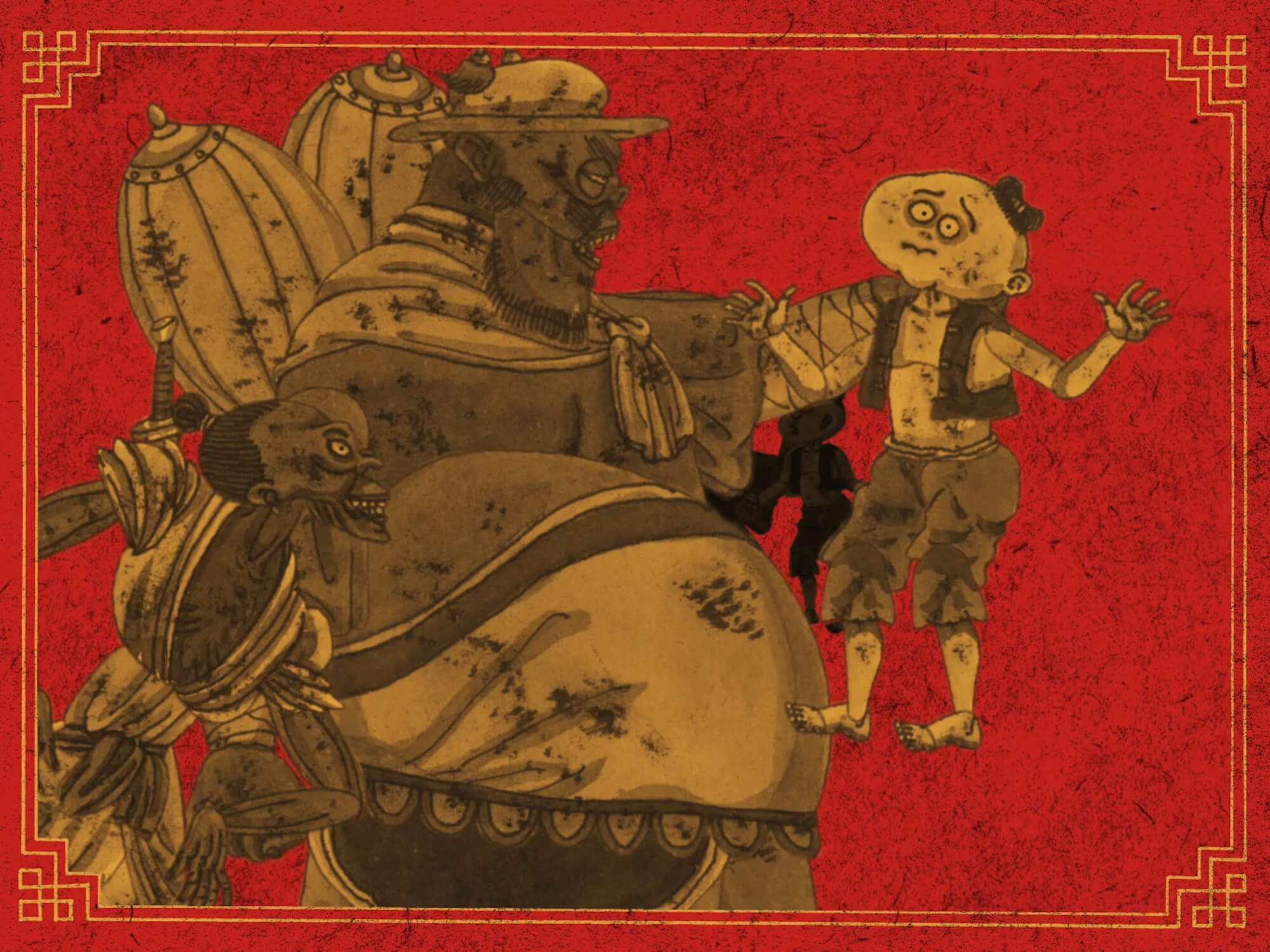 Continuing the trend of films regarding humanity’s greatest weaknesses is Xia Su’s Gold Is Eating People. When a source of gold appears on a mountain, people from all walks of life track it down only to succumb to its power. An inditement of greed Xia Su’s film is gorgeous to look at. He blends traditional Chinese imagery and music with a contemporary absurdity bringing the past very much into the present. One of the many, many unique artistic styles that were on display at Annecy this year and definitely one worth your time.

Erick Oh’s Oscar-nominated animation is a true epic. A huge installation comprising of a pyramid structure which pieces together an entire society’s operation. It’s certainly one with plenty of rewatch potential as every inch of the frame is filled with different and sequential procedures. Oh has talked about the inspiration he drew from fresco murals when creating it and it’s easy to see why. This is a dense work designed for repeat viewing and it confronts issues we face on a grand societal level.

Domestic awkwardness can be an unbearable thing to watch. Tensions that have built over time slowly manifest from pet peeves into larger frustrations. Claire Sichez’ L’Amour en plan tackles this subject cleverly through a colourful and modern visage. What seems clean and idyllic on the surface is actually a coverup for a slow-burning distancing between a married couple, and as their son watches on, they have no idea of the destructive impact they’re truly causing. It’s a beautiful and heartbreaking animation that deservedly closes out our festival recommendations for this edition of Annecy. A really inspiring collection of short films that highlight the strength of talent currently at play in the animation industry. See you next year.

You can find more unmissable films, like the ones playing Annecy International Animation Film Festival 2021, in our Best of Fest collections.