As a student filmmaker, there’s a certain freedom in your work that may never come around again. Yet, don’t let this freedom sway you into thinking there’s no pressure for these emerging creatives, for many this is a golden opportunity to showcase your talent, an opportunity that could help launch your career. With that in mind, there needs to be a balance between making films that push boundaries or try new things and films that highlight your craft and display that you’ve got something that could work in industry. With NFTS short The Song of a Lost Boy, director Daniel Quirke got the balance just right. A striking tale of a young choir boy who suffers a crisis of faith after his voice breaks, Quirke’s stop-motion film displays an original voice and meticulous eye for detail – something the filmmaking industry is always going to be on the lookout for. The director joins us on DN to discuss how his own religious upbringing helped shape his film and the appeal of working with wax puppets…even if they do melt.

Often when watching films, you can see the storyline and the message the director wants to get across and you get a decent idea of where the inspiration for the story came from. With The Song of a Lost Boy, the premise is so wild, so out there, I’m really intrigued to find out where this narrative came from – can you start by telling us a little about its origins?

The origins of this film came out from a lot of conversations I had with the writer, Bríd Arnstein and producer Jamie MacDonald. I came with a lot of themes that I wanted to explore and gradually we crafted the story based on those. I’ve never been a choir boy myself but have grown up in a religious family and so have always had tensions to do with faith – whether I had it or not, fearing rejection of people because I’m religious and then fearing disappointing others if I wasn’t religious and therefore requiring the need to come to some sort of self-acceptance/discovery. Something deep down that I’ve always feared is not being accepted and through life have changed and evolved at times to try and fit in with whatever group I’m a part of but something I wanted was to find a place of acceptance and strength within myself where I could simply be who I am without worrying what other people think of me and making this film was a sort of journey towards that within myself as well.

We thought it was a beautiful metaphor for the loss of faith.

We thought a choirboy on the cusp of puberty would be the perfect character for this as the teenage years were when these feelings became heightened for me so we thought it was a beautiful metaphor for the loss of faith – this childlike purity to start off with which goes through a period of uncertainty where the voice is unstable before maturing and finding a new path/voice after some time.

As I just mentioned, the story is a little bizarre, but in this odd tale of a choir boy joining a band of nomads, there’s a strange sense of relatability and recognition, with the message here seeming to revolve about finding a sense of inner peace and finding people who accept you for who you are. In your last answer, you discussed your own aims and inspiration in making the film, but I’m wondering what you hope an audience takes away from a viewing of The Song of a Lost Boy?

The main message I’d hope people can take away from the film is the importance of finding acceptance within oneself. As much as it is important to have a community of people who accept you for who you are, there’s no point in just trying to find those people as there will always be people who are different and think differently from you. As long as you are able to accept yourself and be strong and confident in who you are as a person you can be around anyone and stay true to yourself without running away from situations of humiliation and confrontation.

As this was made as your grad film from the NFTS and I’m assuming at this stage in your career you were thinking of next steps, did you have any specific goals in mind with the short? Was it all about the story or were you hoping to show off craft and technique as well?

The goals I had for the short were for it to hopefully do well and go to some festivals and also for me to personally go on a journey whilst making it. Story was a big part of the film but technique and craft were also something I was very interested in exploring and also expressing.

As we just mentioned the craft, let’s talk about the production. I was particularly interested in the character design and the puppet creation. What was your thought process behind the design of the characters and how did you achieve the striking, textural look of their skin?

The puppets came from a desire I had to melt wax puppets – I find the image of materials that are powerless in front of change really beautiful as it’s just how we are in front of life events sometimes. For example, how metal rusts due to water and oxygen, wax melts in front of heat, mould forms as food decays. And so, I wanted to use this with the puppets, adding some sense of tension and jeopardy to the plot also as it is set in a hot desert. However, it became too complicated to have the characters melting as well, so we removed that aspect from the story and instead it’s a much more subtle thing. The wax puppets naturally became a bit soft and shiny when under the hot lights and whilst shooting in the summer but we also would stroke the puppets each frame producing this ‘boiling’ effect that made the characters constantly feel alive even if they weren’t moving.

Puppets did actually start to melt.

In the bonfire scene, we had a powerful light to produce the firelight which would get quite hot so puppets did actually start to melt a little which was quite fun visually even if it did make animating a little tricky at times! I also really liked how wax picks up a lot of dirt because it’s quite sticky and as we shot the film pretty much chronologically, physically it adds a sense that the main character has been on an actual journey which shows in his clothes and skin.

Another part of the production that makes the film such a success are the vocal talents and soundtrack, can you provide us with some insight into casting the choral voices and how you went about getting those songs just right (they’re so good)?

Music is always a really important part of the filmmaking process for me and often gives me ideas. I started working with Darryl O’Donovan the composer early on trying to find what music would be right for the film. Darryl had the idea that the music created by the nomadic group in the film should be made with fabricated instruments and repurposed objects – just as the group in the film do themselves. So Darryl made some instruments out of PVC pipes, and with the help of sound designer Ruanth Chrisley Thijssen, recorded loads of samples of pipes, banging pots, pans, barrels and created this musical world of the nomadic tribe.

We also wanted the music to be quite vague in terms of genre and time period to remove it from being placed in a particular setting and time. Darryl wrote all the pieces and then when casting the vocals, we chose two very skilled singers for the main character (pre-voice break and then post-voice break), and then for the nomadic tribe we wanted singers that weren’t particularly skilled singers but just ordinary people who are able to express themselves so asked some friends and volunteers at the NFTS to record the voices. For the score, we wanted to have some internal music of the main character which expressed how he feels at particular points in the film and for this, Darryl used some recordings of him blowing through a saxophone reed to get the expressive, almost internal voice of the main character for the score.

Finally on the production, what made you go for stop motion, over any of the other animation techniques you could have employed?

I wanted to go for stop motion as it’s a technique that can really connect with people through the materiality and physicality of the puppets and sets. Also, as mentioned before, I love how the materials can bring a heightened sense of tension to the characters and plot which stop motion really allows. I love how different materials and textures can communicate different things too. For example, how the harsh dry earth and sand of the desert contrasts with the damp soft moss in the cave towards the end of the film and how quite simply, these materials can quickly and simply symbolise a shift in the character/story through some sort of haptic communication to the viewer. Also, it’s the medium of animation I feel most connected to, possibly reconnecting with that childlike sense of play of having models, figures to play with. 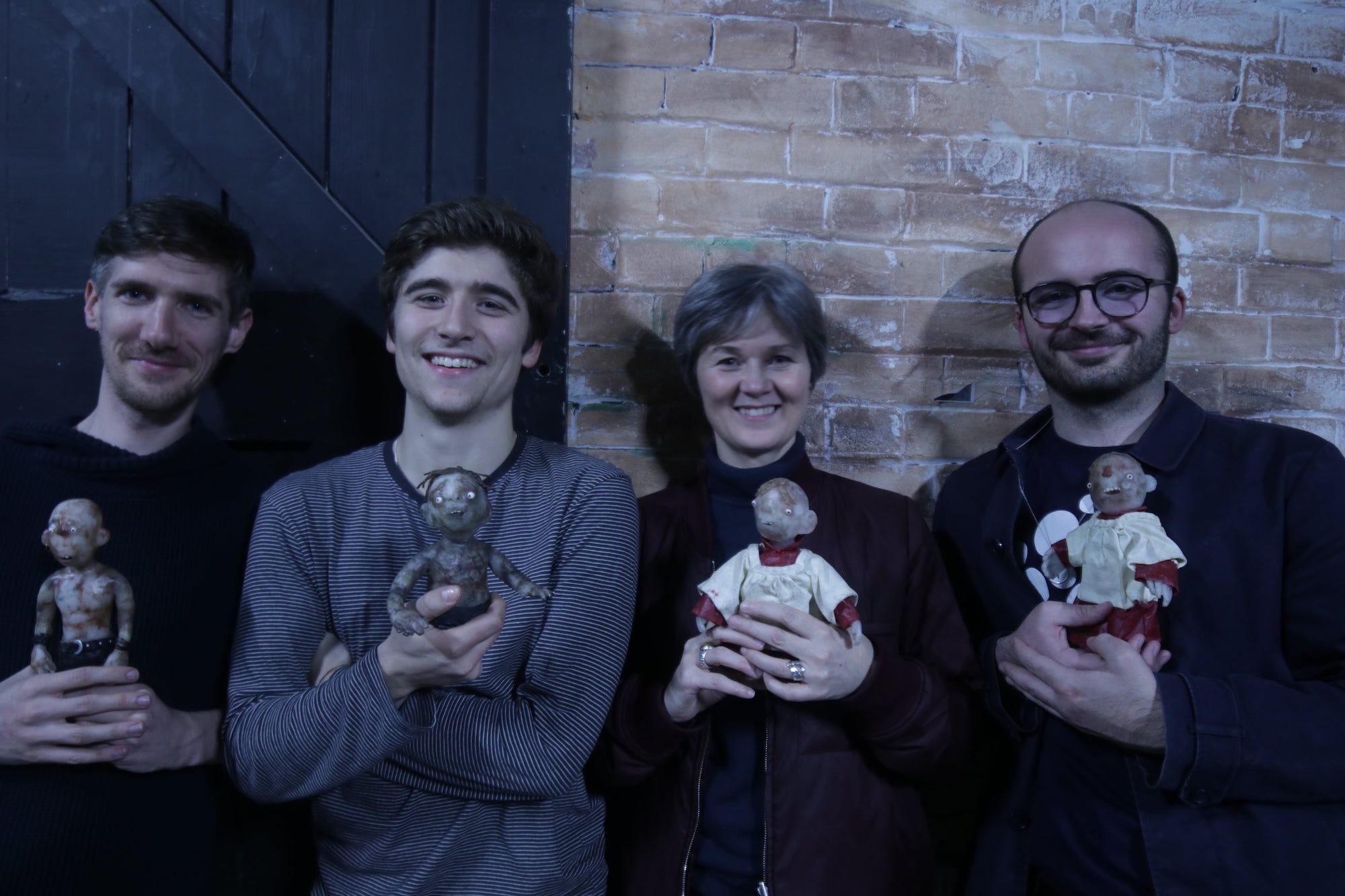 The film’s seen some success on the festival/awards circuit picking up a BAFTA nomination and a nomination for Best Animated Short at Encounters – what has the recognition meant for you as a filmmaker?

The recognition has meant a lot as it was quite a personal film especially about acceptance and it’s been amazing to see that it manages to connect with people and resonate in some way. The recognition also means a lot as hopefully, it can help in allowing me and also all the other crew members to get more work and funding for films in the future.

I recently finished a new short called Dagda’s Harp that’s just been released. It’s a children’s stop motion short commissioned by RTÉ for Halloween which has been fun to make so I’m hoping people are enjoying that.