As the Russian army under pathetic despot Vladimir Putin finally did what was seemingly unthinkable and invaded Ukraine in late February, artists had four choices: either to leave the country, join in with the lies and bullshit nationalism, say nothing, or try to respond with their work. For the 22-year-old Dasha Gushchina, the latter choice seemed like the only natural option. Staging several female dancers in a barren, dirt-filled countryside, the Russian choreographer/director creates a powerful exploration of the contrast between conformity and rebellion, aping militaristic movements to strongly condemn the nation’s slide into brutal fascism. Both enigmatic and dark while also remaining hopeful and playful, Slaughterhouse-Six is a startling portrait of the difficulties people face living today in a nakedly authoritarian country. We had the chance to talk with Guschina about the need to make this film, being inspired by Kurt Vonnegut, and working with two DoPs to capture the contrasting camera movements in the film.

What was the key inspiration behind making this movie?

Frankly speaking, using the word ‘inspiration’ seems almost inappropriate when it comes to describing my approach to this particular video. I may sound pathetic, but it wasn’t inspiration, it was horror and a very strong emotional reaction to what happened on February 24th and is still happening in Ukraine that made me film this work. Up to that date, I was a 22-year older Moscow-based dancer and choreographer whose outlook on the world, as I now realise, was based on quite limited ideas and thoughts. I couldn’t imagine that one day those who represent my country would take up guns, invade the territory of our brothers and start killing people who I never even used to separate as some other nation. This video is by no means a political statement because I know nothing about it. It’s just me, a young director sharing my endless despair.

It wasn’t inspiration, it was horror and a very strong emotional reaction to what happened on February 24th and is still happening in Ukraine.

The title is a reference to Kurt Vonnegut’s Slaughterhouse-Five. Was this an influence beyond the title?

It’s a great anti-war book and it’s definitely an inspiration. The second part of the title of the novel is Children’s Crusade and this part is as significant as the first one. After all, what is war except slaughter and who goes to war if not babies with freshly shaved faces who are not prepared to face and do things they’re about to do?

You worked on the choreography yourself. Which kind of movements were you aiming for? What were you hoping to convey?

There are two states reflected in this choreography: the aggressor and the victim; the victim’s movement is always a reaction to the aggressor’s action. I wanted the choreography to become an exaggerated representation of violence and tried to convey everything: the trembling hand, a glimpse of hope, the waves of despair and sorrow.

The location is so weather-beaten and rugged, a land where nothing grows. Was this important? Tell me about finding the right location?

Yes, you’re right, it was important. I wanted the location to give you this unsettling ‘middle of nowhere’ and ‘no man’s land’ feeling. We found those two locations driving around with the DoP and the producer in their car not too far from Moscow because that was all we could actually afford. On the day of shooting the landowner asked us to leave the field that we planned to shoot on. It took us three hours to look for an alternative place. I think it worked out for the best as it was windy and grey and dramatic, and the ground had this amazing texture.

I wanted the choreography to become an exaggerated representation of violence.

Was there a challenge in matching the camerawork with the choreography? How did you collaborate with your DoP here?

I had two DoPs on set – Julia Gorlenkova and Slava Kotov. I and Julia had already shot some dance videos together in the past and I knew she’d catch the right angle and the right movement straight away. Slava was responsible for cranes and wide shots and did a great job though we had no extra time to think through the details. I had to both direct and dance at the same time so it was a challenge. My costume designer would watch all the takes and shout to me if she thought the last one taken was a good one and I would run to the monitor in those awfully uncomfortable sandals to make sure we got it.

I loved the contrast between foreground and background. What kind of camera and lenses did you use to capture the epic landscape as well as the movements of the dancers, almost at the same time?

With its focus on conformity, army-like movements, and even what appears to be an execution, I can’t help but feel that perhaps you are commenting on Russia’s slide into militarism. Have recent events influenced what you have made?

I guess I’ve already partly answered this question but besides recent events, there were years and years of repression in the history of the Soviet Union when prisons and labour camps were filled with all kinds of people; where a murderer, a rapist, a school teacher and an honoured worker of science would share the same prison cell and work shoulder to shoulder in truly unbearable conditions and where any of them could become a prison guard the next day. I think it’s still in our DNA – the constant fear of becoming a convict with no explanations given.

This video is by no means a political statement, because I know nothing about it. It’s just me, a young director sharing my endless despair.

How has been to create art under such difficult circumstances?

I felt like I wanted to say something, to question the methods and the messages. It wasn’t difficult, it felt necessary. 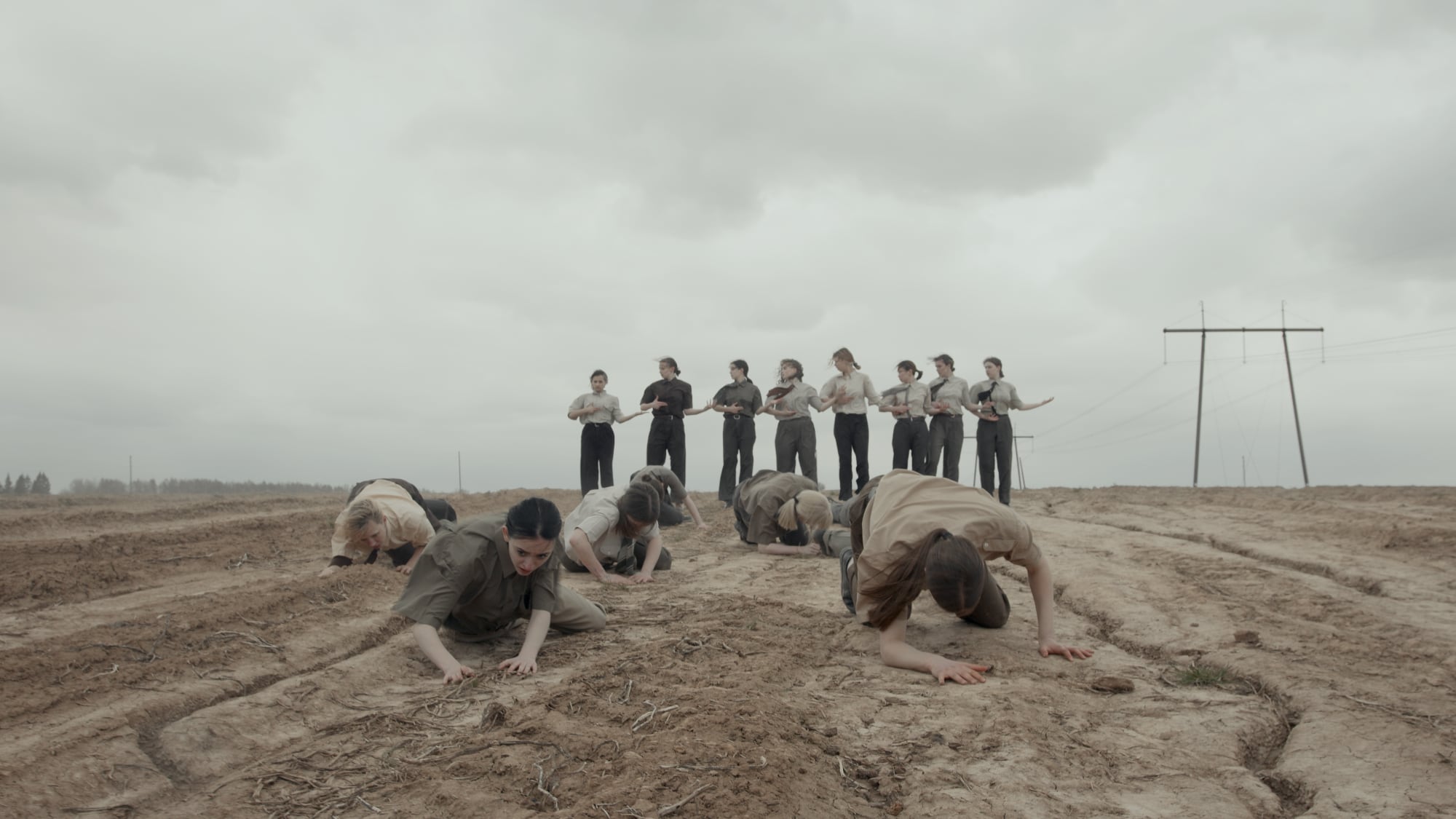 I love the costuming, with the shirts, ties and long trousers. I’d love to know more about this choice of costume design and how you worked with your designer?

There wasn’t much discussion as I knew we were on the same page from the very beginning. The only doubt we had was if we should divide the girls into two groups – the violent ones in darker clothes and the victims wearing lighter shades. We decided not to do this because I realised that it’s their equality that is essential to my story. Austere landscape and a bunch of girls who look just the same — imagine an army of Dwight Schrutes or clerks from a Roy Andersson film.

When the girls are carrying each other at the end, I noticed that you use some folk music. To me it’s like a return to the old, perhaps better ways…

My uber-talented Composer David Oganyan knew we needed something purely Russian for the final act but there was no way we could afford the rights to any famous Russian songs. He offered me to turn to folk music and use chastushki – limericks, ditties. People used to sing them a lot back in the day; the lyrics are usually funny and sarcastic. The one we use warns the girls not to fall in love with the military men because “they’re as deceitful as a pocket watch.” In this case using the old music is hardly about returning to the better ways. People of my generation feel paranoid when realising it’s the past of this country that we’re about to start living again – the iron curtain, the total isolation from the rest of the world.

I’m currently looking for sponsorship for my next project where I’d like to rethink and discuss the relationships between Judas and Christ — the story of the biggest betrayal in history.