When a lonely fraud information worker loses the tool he relies on the most, he goes back in time to prevent his loss. Sascha Vernik’s animated short Losing It is a vivid and pulpy sci-fi puzzle box that tracks one man’s descent into chaos. The joy of Vernik’s film comes in its unpredictability as you can’t quite foretell where he’ll take you or what he’ll show you from scene to scene. Visually, the film slightly recalls the work of Watchmen Illustrator Dave Gibbons in how he bridges the splendour of science fiction with a world that feels downbeat and bleak. DN is delighted to premiere Losing It on our pages and is joined by Vernik below for a conversation where he talks us through the project’s lengthy gestation period, the process of manifesting his dynamic visual style, and the joy of working with voice actors.

Losing It is the kind of film where you can’t quite tell what’s going to happen from scene to scene. Where did the story for it come from?

The story came about as I was trying to piece together a complex structure for a short animated film, almost like a riddle. I wasn’t sure how to go about it at first, but then I had the idea of separating or shifting the protagonist’s timeline from the film’s timeline. That was back in 2010, in real world time. I told Igino, a painter friend of mine, about the core idea of making an animated film featuring a closed time loop and he expressed his desire to get on board. We spent the whole summer sitting in Viennese parks writing the story, drawing storyboards and character concepts. I still look back fondly to that time, it’s hard to believe that it’s already more than a decade ago. Out came the blueprint for version one of Losing It. A very different film than it is now.

I had the idea of separating or shifting the protagonist’s timeline from the film’s timeline.

Obviously, that’s quite a while ago. Did you continue slowly working on it throughout the years or is it more of a resurrected project?

Long story short, after some ups and downs, including the prospect of making a live action short out of it in NYC with the help of great crew members I met during storyboarding on another feature film and it all collapsing due to unforeseen circumstances, we were both preoccupied with other projects and Losing It became a perpetually unfinished project collecting dust. In 2017, after a few failed attempts over the years of restructuring the somewhat subpar first version of the script I was convinced that it would never get made.

A year later I worked on another feature as a storyboard artist and had the crucial epiphany enabling me to tackle Losing It eventually: the director I was working with was dissecting the script and improving scene after scene, actively looking for problems and solutions to those problems. Nothing was sacred. It sounds really simple and straightforward, I know. Duh, that’s what you’re supposed to do! But it was really eye-opening for me. This insight gave me the tools to completely rewrite Losing It so that I was able to push through the next three years of development until it was finished. Finally, I am in the position to properly close this chapter of my career and move on to the next thing.

What were the differences in theme, structure or narrative of this final version of the film as compared to the initial draft that you were stuck on for so long?

There was a big question mark looming over the whole thing and I wasn’t able to put it into words what was bothering me about it. Fittingly, Brotzky’s suitcase was a classical MacGuffin with just some impalpable value attached to it. By showing the contents of the suitcase being the eerie samurai mask or Brotzky’s cheating device I could make the viewer understand much better what was going on inside the main character. The time travel plot device was in place already in the old version but the theme was not as distinct as it is in the final film. By defining all of the elements that were so ambiguous I could make it work to a point where I would have a conclusive explanation for all of the events taking place in the film, enabling me to go for it and finish the thing.

Stylistically, to me, your aesthetic looks akin to that of a graphic novel. What processes do you use when it comes to creating your style of animation?

Stylistically, I was definitely fascinated with old school 2D animation but wanted to add a somewhat painterly quality to it, that’s how the animation style came about. I used shadow passes on top of very loosely filled flat colors with no or minimal line art. Later on in the production I incorporated EBSynth into the process, it was a great timesaver. I mostly used overpainted 3D backgrounds made with Blender, which helped with consistency throughout the scenes. 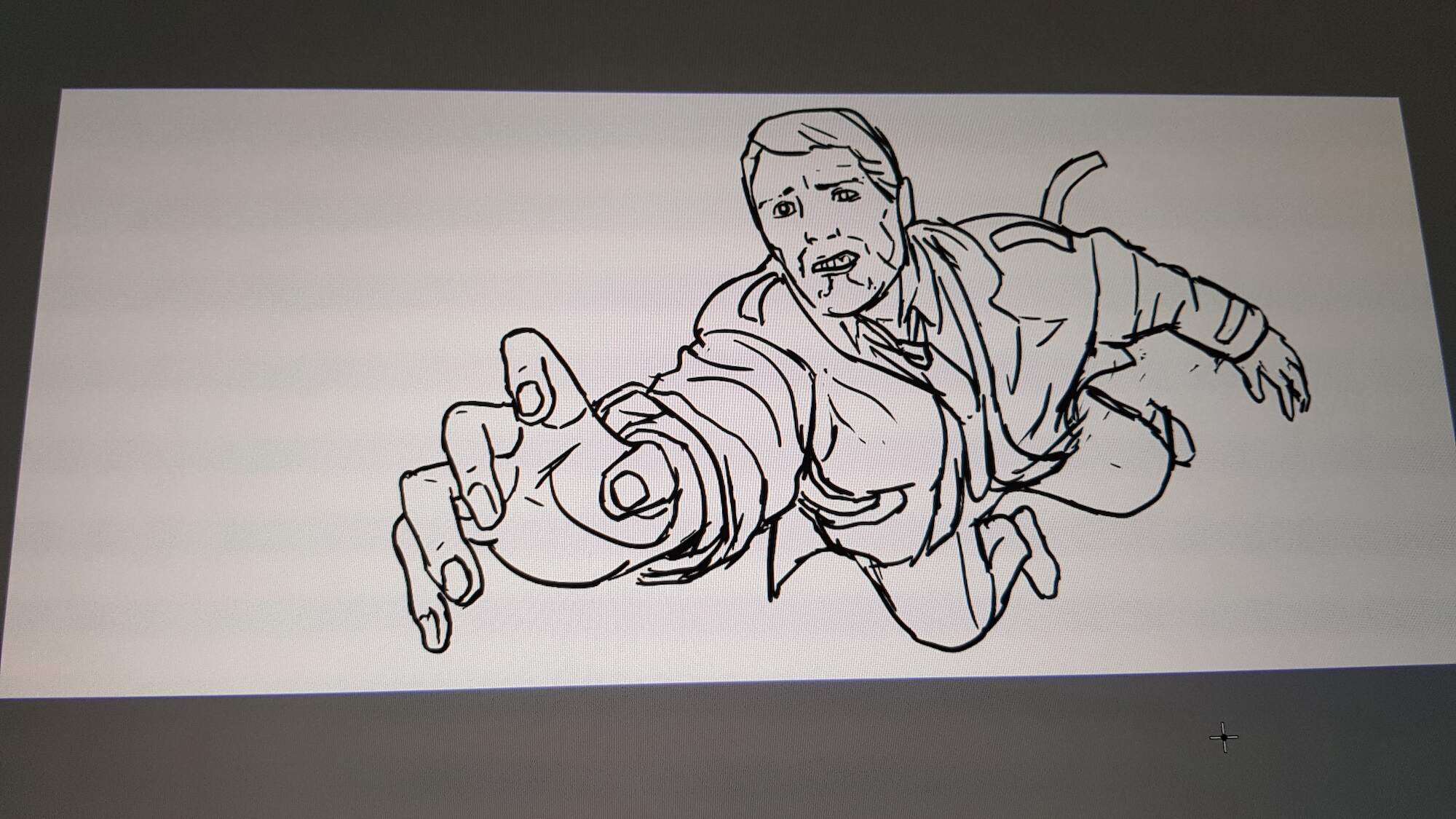 Narratively, visually and sonically, it’s a real melting pot of approaches. Who else did you bring in to add their flavour to the film?

I was very fortunate to gather a great crew around me. Georg Zumann and René Kornfeld from the Viennese recording studio INNENHOFSTUDIOS gave invaluable support in the beginning stages of production, believing in it, organizing and recording all of the voice actors and mastering the audio in Dolby Atmos standard at the end of production.

I was definitely fascinated with old school 2D animation but wanted to add a somewhat painterly quality to it.

Clemens Sainitzer, an amazing cellist, composed the soundtrack for the film. Working together was a great experience, as he was able to translate my somewhat cryptic descriptions of each scene into a rich backdrop of sound. Mauricio Duda had the task of producing all of the foley and sound design. He added real character and mood to the scenes.

How did you work with your voice actors on their performances? Was there a specific approach to the dialogue that you wanted them to take?

I can’t over-emphasize the impact the performances had on shaping the characters of this film. The recordings took place at the Viennese recording studio INNENHOFSTUDIOS during the animatic stage of production. Howard Nightingall, who voiced the main character Alex Brotzky, would act alongside the animatic with a slight, consistent delay, enabling me to later push back the recording to align it with the action perfectly. I was really amazed to hear Alex Brotzky come to life like that. I was really amazed.

For the other characters we had the actors read the script with Georg Zumann from INNENHOFSTUDIOS playing their counterparts and giving them interesting impulses to work from. I tried to direct the actors towards the way I had envisioned the characters, and they did so well, adding so much depth to the lines. Thank you so much! It was an essential reference for pacing and animating the gestures and subtle movements of the characters.

What was your journey into animation as a profession?

Having watched a bit too much TV as a kid I was always fascinated with animated films and shows. It was my dream to make them, before I knew what the work would really look like. I started out studying fine art, keeping my focus relatively broad at first. Only later have I really gravitated towards animation, after working in the film industry as a storyboarding artist for some years. I really value the insight I gained working alongside so many different directors, kind of absorbing their particular vision by drawing the preliminary frames of their films.

My next short film is already in the pre-production stages. It will be a shorter, simpler and funnier film than the behemoth that is Losing It. I’m eager towards exploring different tonalities, formats and genres all the while trying to keep my approach fresh and truthful to my tastes.