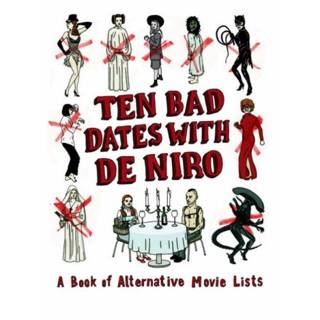 Has anyone else noticed how the majority of Television minutes dedicated to the movies recently seem to be assigned to the all conquering ‘List’? Every week we seem to have a new list of top movie moments, decided by some unknown panel, yet we the movie viewing public rarely get a say in these lists.

Whether it’s the 50 Scariest moments in Film, The 20 most Tear Jerking moments in the movies or the 29 worst Sequels in Cinema History, every week it’s something new and now, finally, someone has decided to give us a say.

The BFI has launched its Listmania competition in conjunction with the publication of Faber and Faber’s Ten Bad Dates with De Niro: A Book of Alternative Movie Lists. This competition finally gives us, the regular film going public, a chance to decide on your very own top ten lists, however weird and wonderful we decide to make them. Whether you want to choose the 10 best CGI moments in film, the 10 Worst Kevin Costner films ever made (I think I wouldn’t know where to stop) or the 10 goriest deaths in movie history. Not only is this competition a chance for you to share your particular likes and dislikes of film, but 10 lucky winners will be invited to present their lists at a special event organized by the BFI as part of the Times BFI 51st London Film Festival. Personally, I’m writing up my list of the top ten Steve Buscemi cameos as we speak.

Update
MarBelle butting in here, so as El-Vez mentioned above, the BFI organised a special event for listmania at the London Film Festival at which I’m currently sitting – yep got to love the combo of a laptop, wireless and an overriding OCD nature for being able to update your site in real time.

Along with book editor Richard T. Kelly a panel comprising Ryan Gilbey (film critic of the New Statesman), novelist Matt Thorne (Eight Minutes Idle, Cherry) and author and film critic Anne Billson (Suckers, Stiff Lips) are kicking about the draw of composing lists so we can agonise over their relative positions as if our lives depend on it. You only have to look at our Films of 2006 posts to see just how much hand wringing goes into it.

So anyway ten people were chosen to present their lists to us and battle it out for the position of the best top ten list…see we even have to make lists about lists.

4 Responses to LFF07: The Top Ten of Top Tens