I’m sorry about the lateness of this list but if the truth be told I hate writing my top ten. I don’t mind weeding out the films I didn’t like and whittling down the amount of good films to a number resembling ten but it’s the ordering that I detest. Who’s to say that if I saw my number one film on another day when I wasn’t in quite such a good mood that it would still be my number one? Who knows, here’s my top ten anyway – take it with a pinch of salt!

1. The King of Kong: A Fistful of Quarters – Seth Gordon
I don’t do computer games – never have done, never will do. Bore the tits off me if the truth be told. The only exceptions to this rule are the purple Nintendo Snoopy tennis game that my ma and pa bought me when I was about eight on the way to Ibiza (which I still have) and the fleeting interest that I may have shown in the Nintendo DS dog game when it first came out. I was therefore surprised to have absolutely loved this documentary about an all out war between two old school gaming competitors. Billy Mitchell is the devil reincarnate with a mullet whilst Steve Wiebe plays the underdog letting his son shit his pants in the name of gaming. There were tears, there was laughter – at one point I nearly had to bust out a stationery set to pledge my support.

2. Hotel Harabati – Brice Cauvin
I really liked this story and enjoyed how this film was shot. It was definitely by far the most beautiful film that I saw in 2007. I’m not entirely sure that I was convinced by the ending however and it was one of those that left me thinking, was that it? Despite this I would definitely recommend it. French shabby chic and colour aplenty if you’re into that kind of thing.

Watch the Trailer (French, no subs)

3. Blood Diamond – Edward Zwick
A thought-provoking Hollywood number – I like a film that makes me think and get a bit angry, and this was a job well done. It helped bring to life a ruthless trade that I already knew a bit about but is one of those that makes you feel as if you want to know more, do you know what I mean?

4. Rescue Dawn – Werner Herzog
Amazing tale of a real-life Dieter Dengler, a US Navy pilot who spent 23 days on the run after escaping a Laos prison camp during the Vietnam War. Christian Bale plays Dengler with such passionate conviction that it’s hard to believe that someone else actually went through that shit.

5. Joy Division – Grant Gee
I actually preferred Gee’s documentary on this band to the film Control as I felt that it gave me more of an insight into Ian Curtis and the effect that he had on other people. I’m more of a documentary sort of girl anyway and although I have never been into Joy Division’s music could see through the help of Gee, what it was about Curtis and this band that made people stand up and listen. 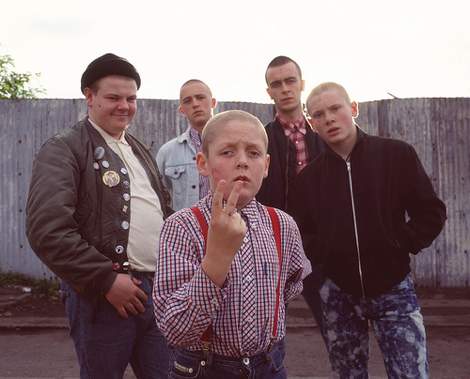 6. This Is England – Shane Meadows
Meadows can do no wrong as far as I’m concerned and this film should actually be rated a lot higher than it is in my top ten when I come to think about it. A social commentary on an age gone by, the early ’80s are shown from a very personal perspective. Highly entertaining and deeply uncomfortable as racist tension permeates a story about what it was like for a working class boy growing up in this era.

7. The Assassination of Jesse James by the Coward Robert Ford – Andrew Domink
I had no real desire to go and see this film and only did because I needed a break from reality for a while and, I’m ashamed to say, thought that I may get to see the Pitt with his shirt off. This film provided me with a lot more than just a piece of eye candy however and I thoroughly enjoyed the complexity of an American West story of hero worship accompanied by a fantastic soundtrack.

8. Control – Anton Corbijn
I liked the arty black and white shots, and one of my favourite actresses, Samantha Morton, was in it. As I said earlier though, I much preferred the documentary to this film which didn’t leave me thinking much else other than, well he was a miserable git wasn’t he?

9. Atonement – Joe Wright
Two of my least favourite actors played leads in this film so I really have no idea why I ended up going to see it. Keira Knightley and James McAvoy were entirely convincing in their roles however, and despite images of Domino Harvey only occasionally popping up in my mind, I am pleased to report that I did manage to immerse myself enough in this romantic drama to come out of the cinema blubbing. Result!

10. Import Export – Ulrich Seidl
I can honestly say that this was one of the most depressing films that I’ve ever seen and a film that I have no desire to ever watch again. The only other film I can categorise in the ‘seen it once and it was brilliant, but there’s no way that I’m ever going there again,’ is Requiem for a Dream. Seidl tells the tales of two people searching for a better life – one going East and one West – and manages to portray hopelessness and desperation with full abandon through his characters and the landscape in which his Czech film is set. (MarBelle: Just so happens that we’ve got an interview with Ulrich Seidl at the London Film Festival for your listening pleasure)