I’m not a big fan of Steven Soderbergh, there I’ve said it, it’s out in the open now……please don’t kill me!!

I think I always kidded myself that I was a fan of the prolific director, but going through his filmography earlier, the realization suddenly struck me that he hasn’t made many films I’d rush to watch again. Admittedly Out of Sight is a film I absolutely love and whilst I always liked the visual style of Traffic, many of his other movies just didn’t hit the mark with me (although to be fair to Soderbergh I haven’t seen his recent works – The Girlfriend Experience or Che). Saying that, I was really looking forward to The Informant!, from the clips I’d seen it looked like a nice light way to kick off an early session of film watching. 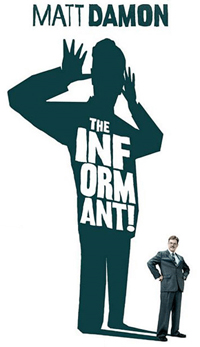 The Informant! (can’t forget the exclamation mark) tells the story of Mark Whitacre a young go-getter in the Agriculture Industry, who turns FBI informant to expose his company’s multi-national price-fixing conspiracy. Whitacre’s plans to become a national hero soon come crashing down, as the FBI find out their informant isn’t exactly telling them the whole story. It’s a black comedy of sorts I think, although in all honestly the laughs per minute ratio wasn’t high, it was more kooky than funny (a ‘Kookedy’ maybe?).

Soderbergh’s film is based on the book The Informant (A True Story), written by Kurt Eichenwald and is based on true events, although from the story I’d take the ‘based on’ very lightly. It’s hard to imagine that the extremes Whitacre goes to in the film actually occurred in real life. Although, to be fair, I’m guessing the real life story wasn’t that funny! [MarBelle: Oh it is. Check out This American Life’s The Fix Is In episode.]

It’s a decent turn from Matt Damon (still can’t write or say that name without thinking of Team America: World Police) in the lead role and he basically carries the film on his slightly podgy shoulders. However, Damon’s zany character isn’t enough to make this more than slightly humorous and unfortunately, his performance can’t quite lift Soderbergh’s latest offering above the average mark.