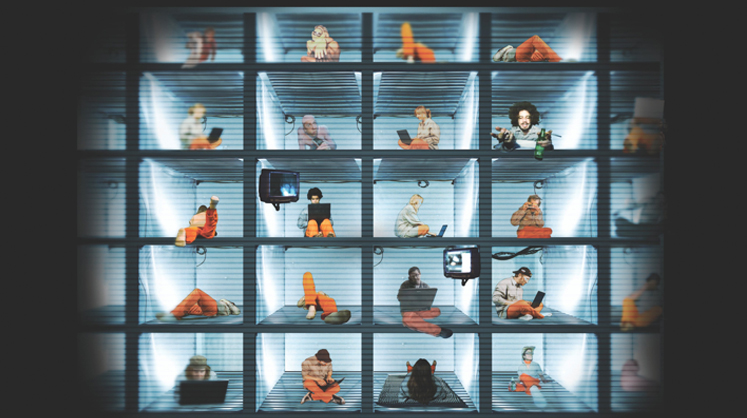 Double Sundance Grand Jury prize winner Ondi Timoner, must have thought she was living the documentary filmmaker’s dream, when in 1999 she was asked to document a social experiment/art project involving 100 artists living in an underground bunker in New York for a month. However, the project soon turned into a nightmare as the life of its instigator (internet pioneer and main focus of We Live in Public), Josh Harris, started to spiral out of control.

After filming the whole experiment for a month and editing for two and a half months, director Timoner returned from pitching her project Dig! at Sundance to find the Avid system gone and the master tapes missing. In her absence, Harris had gone through the rough cut, decided he didn’t like how it made him look and took possession of everything, leaving Timoner unpaid and without a film. Ten years later the film has evolved from a story about this one experiment (and the possible birth of reality TV), to the incredible tale of the rise and fall of Josh Harris.

At an early age, Harris began predicting a future dominated by the internet and as this prediction came to fruition, he was at the head of the queue to cash in, becoming one of the key dot-com kings. After making millions with his share in Pseudo.com, a website for live audio and video streaming, which Harris later described as an art project, he went on to push the boundaries of art/society with his Quiet project, where he gathered together a community of 100 artists and scenesters to live for one month in a fabricated bunker, complete with a thorough, ‘nowhere-to-hide’ security system, under New York. Featuring a church and a firing range, the residents of Quiet were provided with everything they could need for free (including food, drink and drugs). The only thing that wasn’t free, was the footage that was shot, Harris owned that. After the project descended into chaos and the NYPD brought the experiment to an end (they believed it to be a cult) on January 1st 2000, Harris went on to his next project, We Live in Public. Whilst conducting the Quiet mission, the internet pioneer formed a strong relationship with Tanya Corrin, an ex-presenter on Cherrybomb, one of his video streaming channels and asked her to participate in his next stunt. Harris and Corrin would live out their relationship in a loft apartment fitted with 24 hour surveillance, live in front of the internet viewing public. Sharing all their intimate, personal moments, including a camera in the toilet, the couple would share their new life with anyone who wanted to see it. Obviously, this relationship didn’t last (in fact Harris now refers to Corrin as a fake girlfriend), another project fell apart and a stock market crash meant the millionaire lost it all. What happened to Harris after this point is only fractionally covered towards the end of the film, but it appears he tried to disappear from public view. Although, I doubt this is the last we’ll see of Josh Harris. 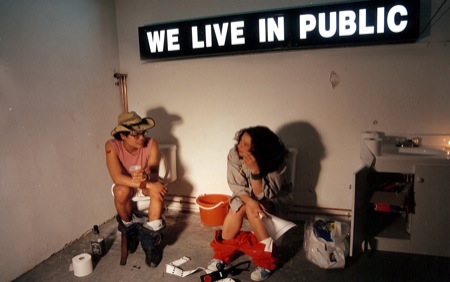 Timoner’s film is expertly crafted from vast quantities of footage and is a joyous, informative watch. The director was in a strong position when brought into record the Quiet project, as she not only became a documenter, but also a participant. Speaking after the film, Timoner confirmed this is the kind of filmmaker she is, by admitting “I’ll pick my subject up if they fall over, but I’ll film them first“. The fimmaker seems very close to her project and speaks very personally, honestly and frankly about it, especially when quizzed on the subject of Tanya Corrin. As a friend of Harris’ ex-girlfriend, Timoner still seems very unhappy with his references to her as a ‘fake’ girlfriend.

This was the second film that focused somewhat on reality TV and fame that I’d seen at this year’s LFF (in fact I saw them only hours apart). Where Chris Atkins’ Starsucker was a light, somewhat uninformative doc, We Live in Public feels like a very personal, informational, dense story. In fact, when the credits roll, you almost find it hard to believe you’d never heard of Josh Harris before and like the titles at the start of the film declared:

This is the story of ‘The greatest internet pioneer you’ve never heard of’.

The only misstep in We Live in Public was the horrible inclusion of Jamiroquai’s Virtual Insanity at the end of the film – A far too obvious choice and far too awful song to end such a brilliant film.

2 Responses to DN LFF09: We Live in Public – Ondi Timoner