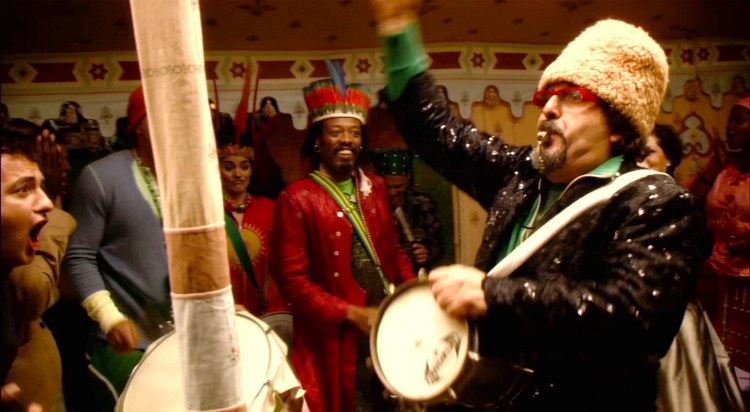 This is my third year of composing a top ten and it doesn’t get any easier. As I explained a couple of years ago, who’s to say that if I saw my number one film on another day when I wasn’t in quite such a good mood that it would still be my number one? Numbers bore me, although I find compiling lists and giving reasons for loving and hating something remarkably easy. I would like to draw your attention to the fact that I have stuck to the rules and not exceeded ten films or avoided putting them in order *smiles and points finger*.

1. Rachel Getting Married – Jonathan Demme
Crazy girl comes home for sister’s wedding. I want to be crazy girl. She is full of angst but she is kooky and she is loved goddammit. A film about family, friends and accepting people for who they are. Lots of tears and emotion and I adore it. If you can’t have a wedding like this then there’s no point frankly.

2. Grey Gardens – Michael Sucsy
I can’t believe that I hadn’t heard of Grey Gardens until now. This HBO film gives an overview of the life of two Edie’s (the aunt and cousin of Jackie Onassis) before the Maysles’ Brothers began documenting their world in the mid ‘70s until the premier of said documentary. I could write an essay on this film – the relationship between mother and daughter, the fashion, the world of East Hampton – absolutely fascinating, all of it.

In a break from tradition we watched the film before the original documentary, something that I recommend you do too. This allowed me to appreciate how cleverly the original dialogue had been incorporated in the film and gave a sense of what life was like for the two women before their life became documented. I also found myself wondering out loud at the extraordinary performances of both Drew Barrymore and Jessica Lange and began to understand the amount of work actors put in to studying their characters and bringing them to life.

3. Swansea Love Story – Andy Capper & Leo Leigh
My Christ. I’ve seen a lot of heart-wrenching social commentaries in my time and heard a lot of sob stories but this takes the biscuit. Hard-hitting, thought-provoking documentary giving scag-heads a face. One of the most innovative documentaries I have ever seen due to the subject nature and intimate portrayal of the people in question. Quality.
[MarBelle: Check out the DN interview with Andy & Leo]

4. 35 Rhums – Claire Denis
Beautiful. French. I cried, a lot. I can’t really even write that much about this film, it’ll start me off again, sorry.

5. Nights and Weekends – Joe Swanberg
I love Mumblecore – low budget, actors I don’t recognise, improvisation and best of all, the ins and outs of personal relationships. This film focuses on a long-distance relationship and the awkwardness of reconnecting at a later point when all has been said and done. I might love Joe Swanberg a bit too.

6. Alexander The Last – Joe Swanberg
Made after Nights and Weekends, this film looks at real and imaginary relationships and confuses them. Mumblecore again, Joe Swanberg again. Maybe I’ll do a top ten of Mumblecore at some point this year and go into detail.

7. District 9 – Neill Blomkamp
When I saw this I was like, ‘this is one of the best films I have ever seen,’ and you know what? It really is! Maybe it should have been higher up in my top ten? I thoroughly enjoyed it and I really wasn’t expecting to as I don’t do aliens or sci-fi. I love that cash was given to make this film based on Blomkamp’s 2005 short Alive in Joburg.

and I love that it concerns itself with issues that our society is facing such as xenophobia and social exclusion. Clever and very well done.

9. An Education – Lone Scherfig
School girl seduced by clever older guy. He’s not a paedo though, you can see the attraction – it’s a love story, it’s about escaping to a more exciting place – a place away from Latin lessons and a middle-class family setting. And then he turns out to be an arse.

This was me – except that I was most definitely working class, got taken to the Lido in Margate instead of Paris and the closest thing I got to dinner out in posh places was jam sandwiches in the back of a grey transit van. Happy times.

10. Still Bill – Damani Baker & Alex Vlack
My top ten wouldn’t be a top ten without a documentary about a musician: Bill Withers, past – present- future. I love life stories and this one is especially great as Withers didn’t get a recording contract until he was 32 and used to install airplane toilets as a living. He’s down to earth, completely lovable and doesn’t seem intent on staging a comeback.
[We interviewed Damani & Alex as part of our LFF coverage]

Happy Go Lucky – Beautiful and sweet. Released last year but I didn’t have the pleasure of seeing it until early this year. Mike Leigh, nuff said.

Looking for Eric – Ken Loach and Eric Cantona together at last. My Dad would have loved this.

The White Ribbon – Dull, bar the one line which I think at least a couple of times a week. Haneke should have just made a short and not bothered. It’s only going to be remembered for that anyway.

Coco Before Chanel – What could have easily been an interesting commentary on an influential woman’s life turned out to be a boring and not very illuminating picture.