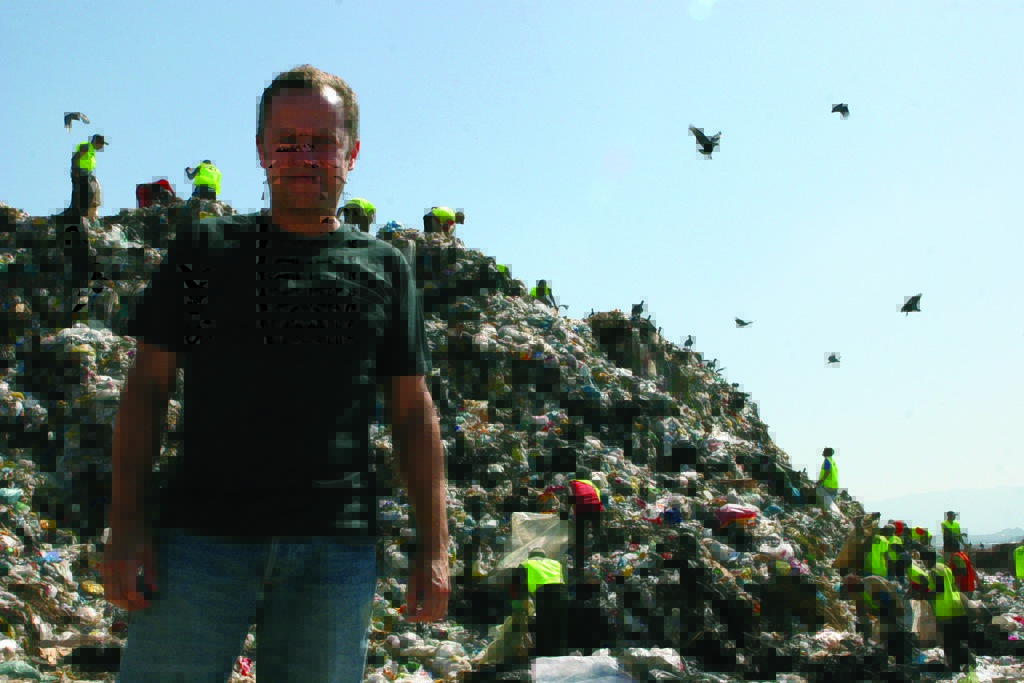 Vik Muniz is an internationally acclaimed artist from a Brazilian working class family best known for his pieces using materials such as string and food. In Waste Land we see Vik return home to help the people known as ‘catadores’ working in Jardim Gramancho, the worlds largest landfill site. There for the journey is director Lucy Walker, capturing the spirit and life of these people at work and taking us into their homes.

Before they leave for Rio, the filmmakers and Vik both have feelings of anxiety. Not knowing what to expect, Vik and his collaborator Fabio look at aerial pictures of the landfill site. Nothing could have prepared them for the reality of the situation; the people endlessly picking rubbish both day and night. Walker talks about their first recce of Jardim Gramancho, recalling one of the eldest pickers Valter as he cycled towards them on his bike decorated with trinkets in head to toe protective layers fit for a voyage into space, it was at that point she knew she had a film.

Vik originally set out with the intention of just photographing the catadores, yet found the photos so striking, he had to do more with them. It was the catadores spirit and personalities that led him to tackle the project he did alongside them. The first thing that struck me as a viewer is how happy the landfill pickers appeared. Confusing though it may be to us, they felt very fortunate to be in the position they’re in. It soon became clear that for most of these people, prostitution and drugs trafficking are two of the very slim occupation options they encounter in their lives.

The two Catadores who leave the most striking impression are Tiao and Zumbi. Tiao is the young charismatic president of the ACAMJP (the Association for the Pickers of Jardim Gramacho). Inspired by political texts he found after being thrown away, he started his association to aid all his fellow pickers. Resident intellectual Zumbi has been picking since he was nine years old, instead of seeing books as recycling paper like most, he’s kept every one he’s found. Part of the ACAMJP too, he also runs his shack as a library for the pickers. Both are highly thought of within the site, and are mentioned many times before and after we meet them on screen. 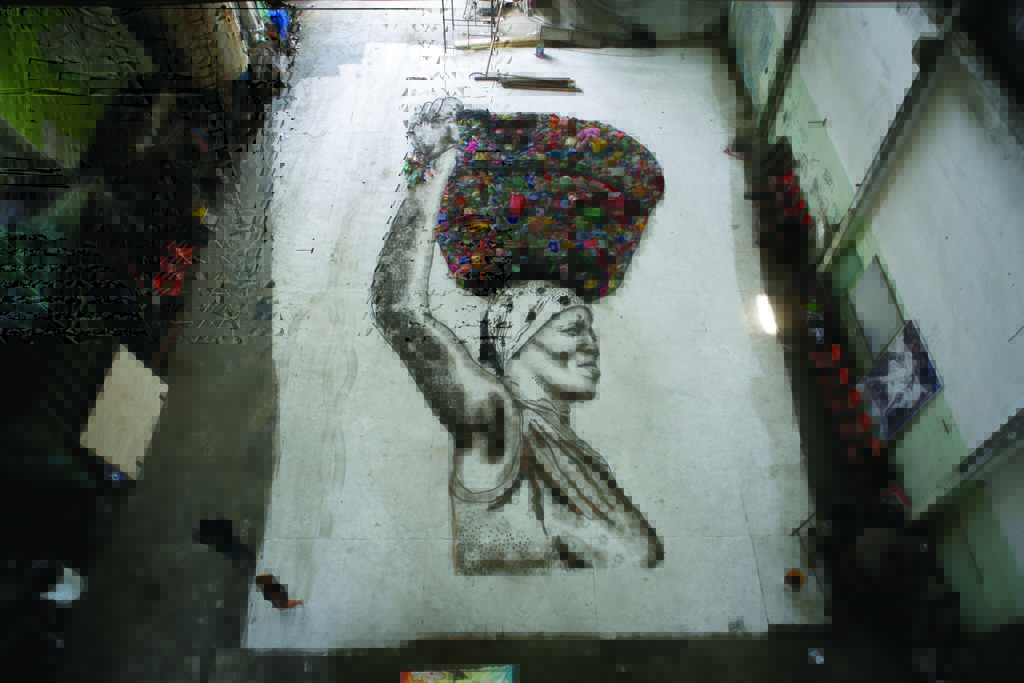 Wasteland also introduces us to Irma, a remarkable women who cooks for the pickers from the still edible food she finds in Jardim Gramancho.  She boasts of making salads, stews and roasts from her findings and sees it as her job to look after everybody. The sense of unity is almost defiant and an element of what makes this a very special place. One man tells us how his life was saved when 20 of the pickers donated their blood after he’d had an accident on the site.

The pickers recreate the pictures Vik and Fabio took of them with some of the rubbish they collected. As Vik directs from above, they slowly create their own faces before climbing up the scaffolding to see the finished product. We see every member of the group react to their recreations, bringing out both their dignity and pride. The effect of the project is particularly great on some; we see a debate between Vic and his wife as she questions whether he’s being unfair by taking them away from the rubbish to take part in this exciting project, flying them to London, but in the end returning to Brooklyn and leaving the pickers in the same predicament they were in before. At the time you can’t help but see this as a justified point, in the case of Isis especially. One of the younger pickers involved with the project who hasn’t worked at the site as long as the others, she hates garbage picking and eventually reveals the tragedy that brought her to Jardim Gramancho.

When taking the first image of Vik’s and the catadores work to auction in London, Vik takes Tiao with him. With a smile I watched as his photo sold for $50,000, an insane amount for most of us let alone a young garbage picker from Rio.

As the film ends, we see them on the opening night of the gallery that places their faces on the wall. The exhibition was one of the most popular in Brazilian history, coming second only to Picasso.  With the money made from the photos and exhibitions, the catadores were able to put back into their community. They built the recycling centre they had always wished for, Zumbi got the full library he dreamed off, complete with computers and equipment for everybody to learn.

Walker stays close for the whole feature, giving us a chance to learn of the catadores’ individual stories and taking us into their homes. None of these people have had an easy life, some stories are heartbreaking whilst others make you laugh, they really do make the best of the lives they’re living. A group of people who are responsible for removing 200 tons of recycling materials a day, equivalent to a city with a population of 400,000, deserve a lot of respect.

Soundtracked by Moby, Waste Land was everything I hoped for and so much more. An uplifting and inspirational film which concludes by showing us the amazing power of art as we hear of the pickers’ transformed lives. Waste Land isn’t due for release until March 2011, but with seats still available for the London Film Festival screenings, take my advice and do everything you can to get yourself to one of them this weekend.