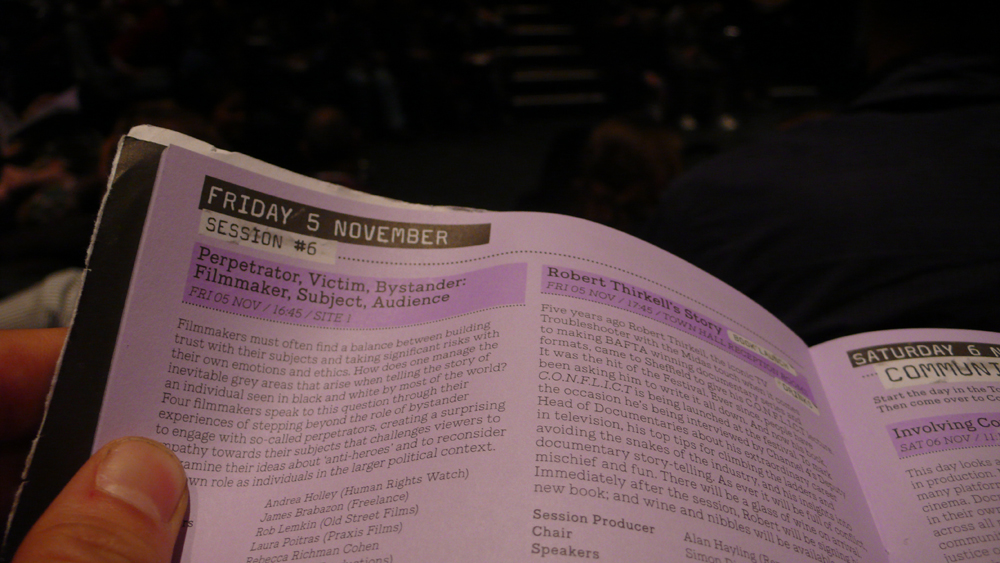 Friday began with a talk on Arts Docs, with an illustrious panel including Tabitha Jackson (C4), Kate Vogel (the Tate), James Hunt (Sky Arts & BBC) and Mark Bell (BBC). This is my arena, or the work that I want to continue to produce anyway, so it was of particularly prescient for me. It was interesting to see the different channels’ tapes next to each other as the difference in programming style became very apparent, as does where I fit as a filmmaker. I’m already in dialogue with Kate, she’s very nice and I’m looking forward to working with her more frequently. I’ve also had meetings with Tabitha, but as you might imagine she’s a hot property. Everyone was queuing to meet her, just to have a brief conversation. It’s certainly tough to make yourself known to these guys, as there are literally hundreds of people vying for a chance to tell them what they are doing, or what they plan to do.

Next we were very privileged to see the film, My Kidnapper, an incredibly moving story with a great Q&A afterwards. I had a chat with co-director Mark Henderson afterwards and he seemed very genuine, open about his influences and how he’s taking the film to market amongst other things. It contains references to Little Dieter Needs to Fly, the incredible film by Werner Herzog, but doesn’t go quite as far and so
therefore isn’t quite as powerful when revisiting their experience. However, it’s clear that you’d have to be very strong to survive such an experience. The film also had a similar feel and formula to Erasing David, it’s perfect for a feature TV doc.

Then it was on to a talk by Kevin Macdonald, director of Touching the Void, and The Last King of Scotland. We heard about the huge YouTube collaborative film called Life in a Day where over 500 contributors uploaded over 4000 hours of footage from around the world in an anthropological experiment and what has the possibility of being a fantastic film. It immediately reminded me of Koyaanisqatsi, but I think he was more than a little eager to shake that label.

Without a doubt my film of the day was Marwencal, a wonderfully personal and unusual film about a man who after being viciously assaulted, suffered psychologically and became lost in the miniature world of action men and dolls he creates for his photography. It’s very clever filmmaking, the way it reveals information, the compelling nature of the subject and it’s clear the filmmaker was emotionally involved.

Then Get Luder by Jonathan Carr, another Bridging the Gap film, played before the Banksy film, and the evening of drinks and socializing began at 10.30 until late.