The Highlights of the 2014 Holland Animation Film Festival

I was fortunate enough to attend the Holland Animation Film Festival (HAFF) 2014 in the picturesque city of Utrecht with a special spotlight screening I co-curated of CalArts School In Focus Animation Retrospective films. The retrospective contained two screenings and was composed of works from both the Experimental and Character animation programme ranging from Jon Lasseter’s student film Nitemare and Steve Hillenberg’s Wormholes to Kangmin Kim’s 38-39° and JJ Villard’s Son of Satan.

The festival took place at the Louis Hartlooper Complex which has four theatres and is equipped with a pair of cafes. The festival itself, due of this arrangement of cafes and theatre, led to much intermingling of festival attendees. There was no great separation or distinction between the filmmakers, the festival director, special guests, or the patrons. Everybody sat together, shuffling from table to table, screening to screening, and back to the tables again. Not an evening went by where festival goers did not meet down in the cafe to discuss the screenings of the day. While festival camaraderie is common, what makes HAFF’s unique is this complete egalitarian dynamic.

Festival director Gerben Schermer did a tremendous job curating and organizing the festival. His taste is unique, providing HAFF with an incredibly diverse selection of animation, the most varied I have ever personally encountered at any festival. Schermer’s taste is unpredictable and refreshingly impossible to define. He is willing to challenge viewers with silent films, non-formal animation, films some critics would hardly consider to be animation, as well as providing viewers with seemingly more commercial, new, and traditional aesthetics. 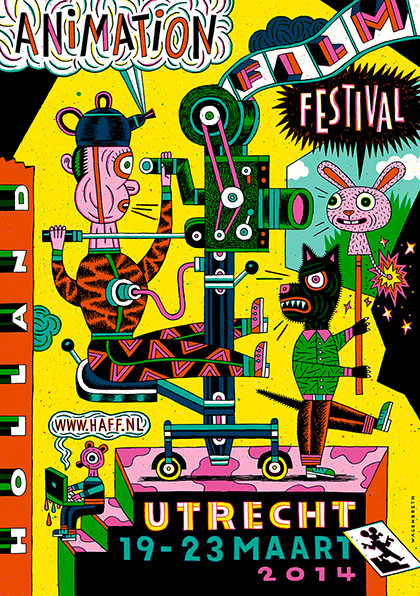 One notable film was Mathieu Labaye’s Le Labyrinthe, a black and white glitch-filled rotoscope look at prison life, the film illustrates how the repetitive and mundane nature of cell life can drive an inmate to madness. The violence created by the environment is echoed by glitches in the repetition of action seen on screen. The inmate transforms into a bull, and the bull back into the inmate. The patterns and rhythms created by Labaye’s film coupled with the subject matter were uniquely compelling.

Another standout in the curated selection was Run by Stuart Pound. Although the film could easily be disregarded as not being animation, it is certainly not undeserving of attention. Pound takes the opening scene from The Matrix in which Trinity encounters Agent Smith for the first time. He then turns the image on its side, duplicates it 5 times, and sequences the scene in timed intervals from right to left. The audio and visual rhythm created by the sequencing of these clips creates a meditative trance that manages to amplify the mystery and intrigue already present within the familiar scene. The momentum and rhythm exponentially increases, creating a sensory overload of the familiar, making the viewer feel conceptually capable of participating in the Matrix itself. And even though the film moves forward in time, you experience the past, the present, and the future of the scene simultaneously.

HAFF 2014 never had a dull moment, providing festival goers with the ability to immerse themselves in screenings, take a stroll to the various animation installations located near the theatre, participate in masterclasses, or simply relax at the cafes between events. I am more than happy with my first experience at HAFF and I highly recommend animators and animation enthusiasts of all varieties to attend in the coming years. I eagerly look forward to attending HAFF 2015.