Anyone can feel part of what could happen, and what should happen.

Identifying the dreams that London holds for so many people, alongside the true landscape of the city as seen by those who inhabit it, Finisterre journeys through London over an imaginary 24 hours, using interviews and imagery to show an insider’s perspective of the city.

Initially conceived by Bob Stanley of Saint Etienne as a way of channeling the money allocated for pop promos into something more substantial, he approached his friend, sometime band member and director of a number of the band’s early promos, Paul Kelly, about creating a long-form film project to compliment their album of the same name. Kelly then brought director Kieran Evans onboard, who was experienced with working on long form film projects and had been experimenting with the possibilities of digital technology in filmmaking. 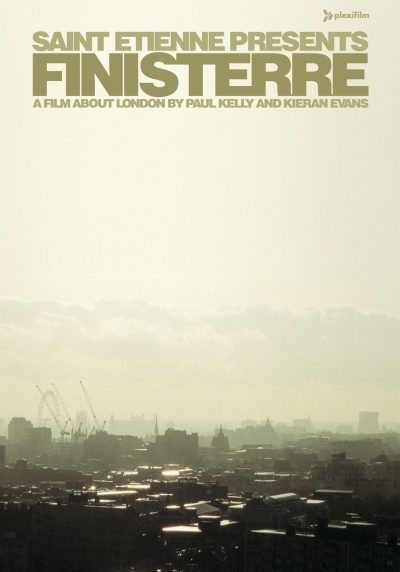 Illustrating the record industry’s paralysis when presented with anything outside of the standard formula, despite showing initial interest, Saint Etienne’s record label soon lost faith in the project and refused to offer any kind of funding, not seeing any benefit to themselves or the band. Unperturbed, Kelly, Evans and the band agreed to continue with the film themselves. Although initially intended as a 16mm film project, Evans soon convinced Kelly that the digital route was the best, considering the lack of financial backing. A Sony PD150 was purchased and filming began. Evans was also able to use his existing relationship with production company CC-Lab, who were kind enough to pick up the slack and cover production costs.

Early sequences were cut together and projected behind the band during their various tours of 2002. These sequences then evolved further for a gig the band played at the ICA and were finally cut together into Finisterre, which had been guaranteed a slot by onedotzero on the strength of these rough cuts. The whole film was shot using a Sony PD150 and a PC120E, with editing completed on Final Cut Pro before being output to DVCAM, laying back professionally mixed sound at The Farm, and outputting to Digibeta.

As well as being included in onedotzero’s worldwide touring programme, the full 60-minute Finisterre will soon be released as a limited edition DVD available to buy directly from the website. As Andrew Hinton of CC-Lab says, “The idea of keeping all aspects of the production process within our control is very exciting and has allowed us to stay flexible and autonomous at every stage. Decisions have been made for aesthetic reasons or because something feels right. Putting the DVD out ourselves and selling it though our website feels like a new relationship – buying a film direct from the filmmakers opens up all sorts of possibilities and is definitely something we want to explore further.”

Future films come in the form of a joint project between Evans and Kelly about the legendary Felt/Denim frontman, Lawrence, while Kelly, Stanley and Hinton are working on a film about disappearing London Cafes.