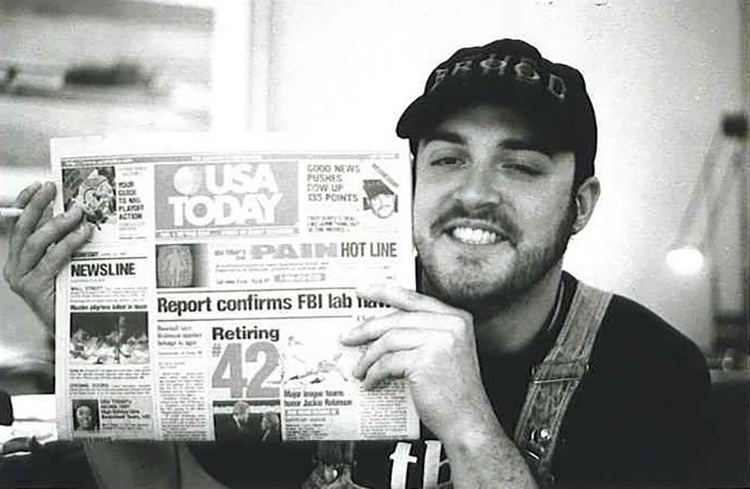 When it comes to the types of films I tend to watch, I can sometimes be a little slack in watching a wide spectrum of genres and styles and often I need a little push to expand my viewing experiences. Recently, that little push has been in the direction of documentaries and after watching and really enjoying the likes of Dark Days, Capturing the Friedmans and Grizzly Man, my thirst for the documentary was at a all time high. It was this thirst that led me to discover Tony Montana & Mark Brian Smith’s 2003 documentary Overnight.

“As for my film career? Get used to it, cause it aint going anywhere. Period!”

These are the words that stuck in my mind after watching the one man wrecking ball that is Troy Duffy in Overnight, a documentary about his car crash approach to making it in the film industry. Overnight is not only riveting watching, but is also a cautionary tale for all would be filmmakers. The film tells the story of wannabe director and rock star Troy Duffy and how his arrogance and inflated ego ruin probably the biggest opportunity he will ever encounter in his lifetime.

Like many of you out there I often think about what it would be like to be granted that dream break and be given the opportunity to turn one of my ideas into a full-length movie. This is exactly what happened to Troy when he sells his screenplay to Miramax mogul Harvey Weinstein. Not only did Troy sell his Tarantino-esque story, but he also agreed a deal to direct the movie, record songs for the soundtrack with his band The Brood and finally, have the bar he used to work in thrown in as part of the deal. Although, this sounds like the perfect opportunity for any up and coming filmmaker/musician/scriptwriter, Troy Duffy manages to not only blow his big break in the most spectacular fashion, but also alienate himself from his friends, some family members as well as most of the contacts he’d made in the Industry.

I tend not to review films when writing for Directors Notes as the internet is already swamped with wannabe film critics. Instead I aim to use a film to look at how it can assist us – whether it be taking positive aspects from a particular film to inspire and motivate us or negative aspects to teach us what not to do. In the past, I have always focused on the production methods/values of a film and have so far looked at these in a positive manner. In this case however, I am actually going to be looking at the content of the film. In particular, I want to focus on the main subject of the documentary, Troy Duffy himself, as I think we can all learn a lot from his actions.

Never take anything for granted – From the moment Troy gets his deal with Weinstein and Miramax, he never once believed that his big opportunity could be taken away from him as quickly as it was granted. He always pushes his luck and uses hostility and blackmail to try and milk the deal for everything he can get. In this industry, opportunities can come and go in the blink of an eye, and you have to always stay on top of the job and go about progressing any agreements in a positive manner. At the end of the day, if you are getting a chance in the industry, you’ll probably have done something to deserve that chance. You have to remember though that these people will be taking a chance on you, make sure you respect that opportunity and the people who gave it to you.

Don’t believe the hype – Troy’s problems all began when he started to believe his own exaggerated hype – all the people around him started telling him that he had incredible talent and a dynamite script and he lapped up every word. Although the vast majority of us will never be presented with a chance as huge as Troy’s and will never find ourselves surrounded with the same kind of hype he experienced, it’s always important to remember to try to keep yourself grounded. Although I may never get an opportunity like Troy, just being involved in an industry I love is enough for me. One day I would relish the chance of making some more films, but for now I just enjoy every little part I play in the media industry.

Remain in close contact – One of the most important things I’ve learnt about trying to get somewhere in the media industry is that it’s all about making the right contacts. This is the kind of industry where knowing the right people and keeping them close can create numerous opportunities for you and help to progress your career. Troy got one of the best contacts in the industry imaginable, the co-founder of Miramax. Through Weinstein Troy makes some unbelievable contacts in the industry, from top people behind the scenes to well-known actors. Troy being Troy not only loses his deal with Weinstein, but also manages to alienate himself from all those contacts during his fall out of favour with Weinstein. Although Troy did finally manage to get his debut The Boondock Saints made, the contacts he had could have set him up in the industry for life. Do your best to get your name out there and whenever possible do your best to give out your contact details to anyone in the industry or even anyone who knows someone in the industry, as you never know where these could get you.

As you can probably tell, I enjoyed watching Overnight as it is hugely entertaining, but also enjoyed the fact that it offered an insight into the industry that I love and would like to play a bigger part in. The exploits of Troy Duffy taught me a lot about how not to go about getting a film made. Whether those lessons are about showing people respect or not spending all my time drinking in a bar, they are important lessons to learn and not only in relation to the media industry.

Troy Duffy you are an entertaining man, but for all the wrong reasons!