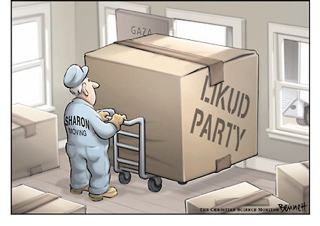 Somehow I thought that I’d be able to decorate and move into my new house, finish at my job, try to sort out new work, record a couple new interviews, edit the Birds Eye View festival special and release a regular episode all by today!

As you can see that has in no way happened. Don’t despair however, I’m still planning to get the Birds Eye View Special and this week’s episode out to you by the end of the weekend definitely, but while you’re waiting you should check out the work by editorial cartoonist Clay Bennett, whom I stumbled across when looking for a picture to go with this post that summed up how well my house move is going. To quote from the mighty Wikipedia; Bennett is the winner of the 2002 Pulitzer Prize in Editorial Cartooning and was suddenly fired from the St. Petersburg Times after 13 years because of his far left political leanings. Well worth a look.