If you would have said to me at the start of 2009, that by March, the best new film I’d have seen so far this year was screened straight onto Channel 4, I probably wouldn’t have believed you. Don’t get me wrong, I have seen some decent films at the cinema so far this year, but without doubt the most exciting and original film I’ve seen in 2009 is Julian Jarrold’s 1974 (the first part of Channel 4’s Red Riding trilogy).

Considering it’s essentially a ‘TV Movie’, I was instantly surprised how dark and moody 1974 is. Jarrold’s film is swarming with dark and seedy undertones and every character we come across seems to have something to hide and nothing much about them to like. At times, I felt like I was almost watching a British version of David Fincher’s Seven, although Fincher’s film didn’t feature quite so much drinking and smoking (a sign of the times I suppose).

I was surprised looking into Jarrold’s filmography to see that his main ventures into film previously were two costume dramas in Brideshead Revisited and Becoming Jane, and a light hearted British comedy in Kinky Boots – three films which I can honestly say I’ve seen and have absolutely no desire to ever to see (maybe that’s a bit closed minded of me, but none of those films have appealed to me). However, whoever made the choice to have Jarrold as a director, made a great selection, as he does a sterling job. 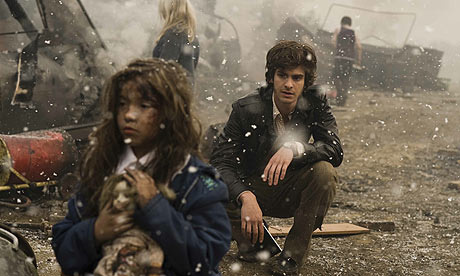 Aesthetically, the film looks stunning and along with cinematographer Rob Hardy, Jarrold has created a distinct visual style for his film. Combining a palette of Seventies Browns (for the interior shots) and Concrete Greys (for the exterior shots), the visuals for 1974 complement the narrative perfectly and combine to give the film its disturbing and unsettling atmosphere. Although some credit for the films style also has to go to the costume and set designers, the characters seemed clothed not only of the era, but the region (but maybe coming from a half Southern, half Northern background, I just noticed this more!) and some of the locations/sets felt like you’d actually be taken back in time to a rainy West Yorkshire.

Along with being visually stunning, 1974 is also deftly cast and features some stand out individual performances from its impressive cast. The array of British talent on show is outstanding and from the lead actors (Boy A’s Andrew Garfield and The Prestige’s Rebecca Hall) to the support players (Peter Mullan, Warren Clarke, David Morrisey, Sean Bean, Eddie Marsan, the list goes on!), they all play their part in making this adaptation of David Peace’s novel highly watchable, hugely enjoyable and totally believable.

With the following parts of the Trilogy (1980 by James Marsh and 1983 by Anand Tucker) coming up in the next couple of weeks, I finally have something to look forward on TV.

If only all TV could be this good!