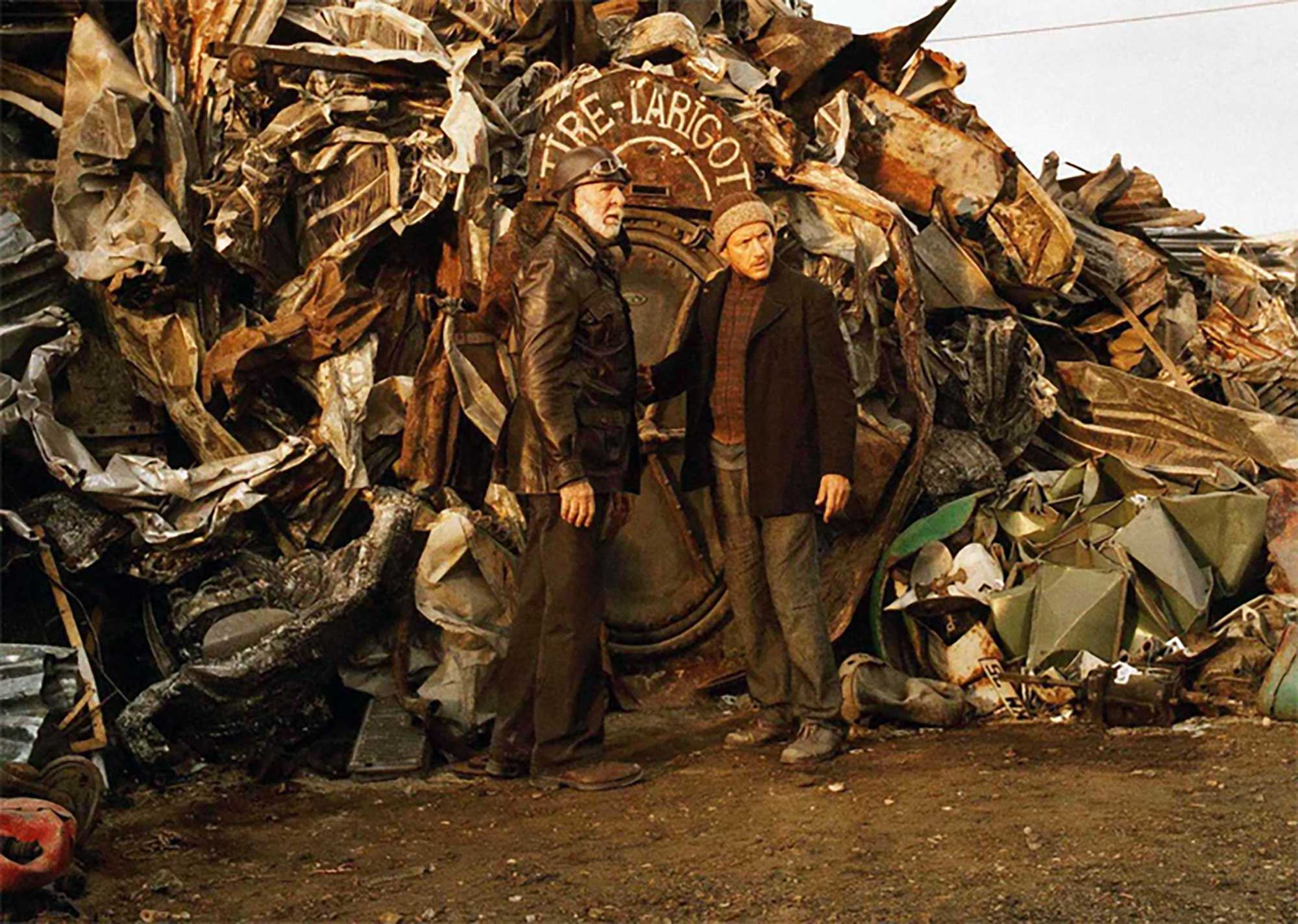 Hitchcockian, Capraesque and Kubrickian are all terms used to describe the relative filmmakers’ distinctive styles, well maybe it’s about time we add Jeunetian to the list (I thought Jeunetesque sounded better for a French filmmaker, but was a bit too close to the already existing Junoesque). It’s not that I’m comparing Jean-Pierre Jeunet to the likes of Alfred Hitchcock or Stanley Kubrick, that’s a heavy comparison to bear, but when it comes to modern filmmakers with a unique and recognisable look, Jeunet must be at the top of that list. Wes Anderson, Tim Burton and Park Chan-Wook would be other contenders for me, but there’s something about Jeunet’s style that is the most idiosyncratic of all. Whether it’s the greenish orange palette, sweeping camera moves, meticulous attention to detail or the appearance of Dominique Pinon (Jeunet has stated he couldn’t imagine making a film without Pinon), you know when you’re watching Jeunet.

Having only made six feature films, over an almost 20 year period, the release of a new Jeunet film is a big event for me, so I jumped at the chance to see a preview of his latest, Micmacs (which apparently roughly translates as ‘sheenanigans’) at the BFI, especially as it was followed by a Q&A with the Director himself.

Part Sergio Leone tale of revenge, part Snow White and the Seven Dwarfs, Micmacs tells the tale of Bazil (Dany Boon), a video clerk whose life is flipped upside down after a near fatal incident at work one night. Trying to piece his life back together, Bazil bands together with a peculiar group of oddballs (including a contortionist, a mathematical genius and a fixated world record breaker) to reap revenge on those who have wronged him. Micmacs is a delicious blend of Gallic charm and English humour; Jeunet declared in the post film interview he had been heavily inspired throughout his career by British comedy heavyweights Monty Python and the comic buffoonery of Mr Bean (as weird as it sounds, you can see a bit of Bean in Micmacs). 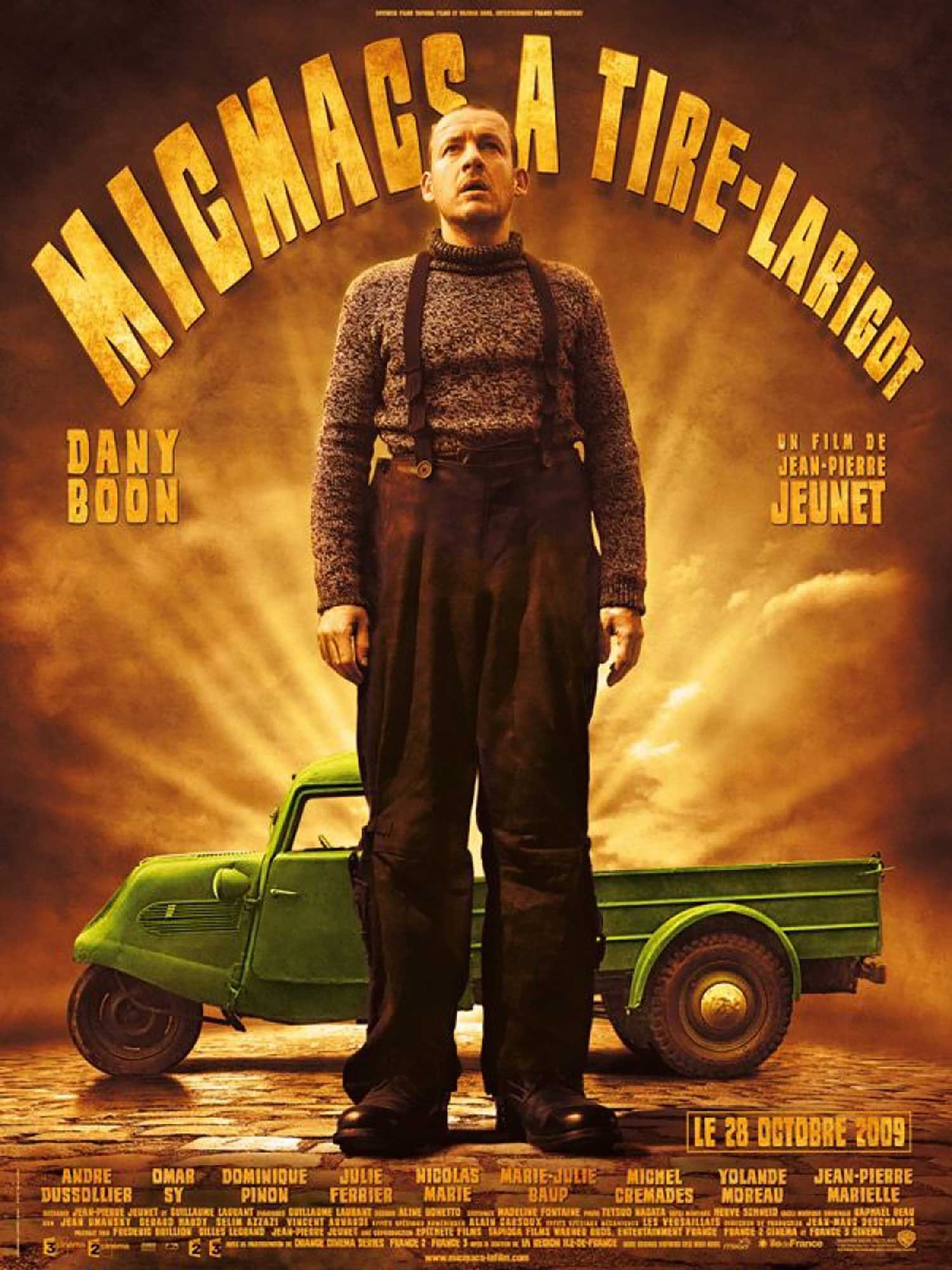 Having spent two years developing an adaptation for Yann Martel’s legendary, award-winning novel Life of Pi (the production never materialized due to Jeunet’s reluctance to use anything other than a real tiger in the production), the French director poured all of his frustration and lack of creativity over this period into Micmacs. Citing his filmmaking style as, “Like a child who has to use every part of his Meccano set”, Jeunet has obviously employed his obsessive eye for detail throughout every department in the creation of Micmacs. He talks like a man who loves work and loves the art of filmmaking; he speaks of how he storyboards his films religiously, sketching out details he wants to include in the aesthetics of his creations. However, the credit can’t all go to Jeunet, as production designer Aline Bonetto must also take credit for her involvement. Oscar nominated for her design work on Jeunet’s previous two films (Amélie and A Very Long Engagement), again the details in the sets, props and costumes are so breathtaking you wouldn’t be surprised if she found herself on the end of another Oscar nomination. The location and set for the motley gangs’ base at the scrapyard is particularly impressive, heavily ridden with props and junk that could have easily been borrowed from the junkyard scenes in Labyrinth. It’s not just the aesthetics of Micmacs that’s rich in detail though, both the performances and soundtrack are also intricately layered. The scrapyard gang of misfits is flawlessly cast and expertly realized (Jeunet described Bazil and his cohorts as like a film Director and his crew), but in particular, Dany Boon’s Chaplinesque turn as the expressive Bazil is the show-stealer. He stumbles and bumbles across the screen with all the comic timing of one of the classic silent comedians and whether he’s busting robotic moves outside the cafe or microphone fishing down chimneys, his every move and expression is precision personified.

Jeunet the man is not unlike one of the characters in his films, answering questions with overtly expressive body language, his face gurning and twisting like the Elastic Girl in Micmacs, he’s certainly not a Director that likes to keep his cards close to his chest. In a revealing but brief chat after the film, the eccentric French director waxed lyrical on The Lovely Bones, French Cinema and Amélie. He told the eager audience at the BFi how he would have loved to had made an adaptation of Alice Sebold’s The Lovely Bones and how he had such a strong vision for it, he is reluctant to see Peter Jackson’s effort. He went on to talk about his lack on enthusiasm  for young French filmmakers and how a lot of players in France’s cinema industry vilify him for being too aesthetic. Personally though, I feel his most revelatory fact of the night was how he had originally written Amélie with Emily Watson in mind for the lead role. I wonder how the film would’ve panned out if she had accepted the role? Finally, when quizzed about advice for young filmmakers and actors, Jeunet wisely said, in Yoda like fashion, “Do not wait for something to happen, when you can go out and do it for yourself.”

So what next for Jeunet? He’s eager to do an adaptation of a novel. We know it won’t be Life of Pi or The Lovely Bones, but whichever book he chooses, let’s just hope it can compete with his wonderful imagination and endless talent.