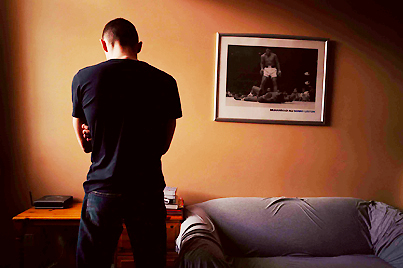 In recent years we’ve become all too accustom to reports highlighting the ever increasing number of troop deaths arising from the global war on terror, but little is said about the many who are seriously injured and left with no alternative than to try and rebuild their lives in the civilian world. Even more worrying is the fact that they’re often left to do so with little help from the military and country they faithfully served, despite the physical and mental traumas which will plague them for years to come.

In Isolation, the new feature documentary from the Institute For Eyes, Luke Seomore and Joseph Bull look at the cost of war on those we send to fight. Instead of a cold look at the statics – 1 in 8 veterans returning from Iraq are reporting symptoms of post-traumatic stress disorder – interspersed with interviews, social photographer Stuart Griffiths guides us through the post-war struggles of the service people he meets, giving his informed personal account of the struggle to reach a level of normalcy. Griffiths, whose work has long documented British Soldiers (Homeless Ex-Service, Back from War, Final Journey), is himself an ex-soldier who was made homeless after leaving the military, before rebuilding his life. This makes his on camera discussions with fellow ex-service personnel all the more moving, as they despair at the lack of resources and support for the challenges, physical and mental, that cause so many of them to self-medicate.

Isolation is currently on a UK Picturehouse screening tour, accompanied by a live score performed by director Luke Seomore with musicians Michael Garrad and David Stephens.