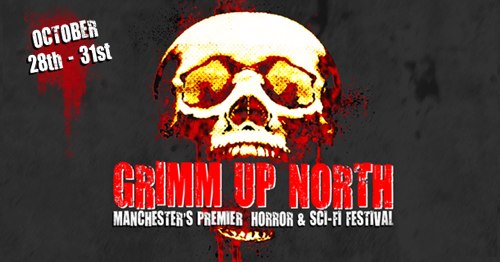 From October 28th to 31st October, independent horror films come to Manchester to have their UK debut at the second Grimm Up North film festival. DN caught up with lovely festival director Simeon Halligan and had a history lesson. Last year Simeon was promoting his directorial feature length debut, low budget shocker Splintered and wanted it to premiere in Manchester, so Halloween seemed an appropriate time. He then got in touch with various filmmaker friends and contacts to see if they had any films to show too. One thing led to another and the festival was born.

Since then, film-making has taken a backseat as his time has been taken up with organising this year’s festival and looking at the films on offer, it’s been time well spent. Opening the festival is the Vincent Price classic Last Man on Earth, the original movie adaptation of Richard Matheson’s I Am Legend novel.

This is followed by Outcast, an interesting looking psychological horror from Ireland starring James Nesbitt.

Other recommendations from Halligan included:

Dream Home, a Hong Kong film about a woman who will do ‘anything’ to get that much sought after property and judging by the clip we were shown, she goes further than gazumping.

Amer, more art-house than horror with a nod to Argento, in evidence on the fantastic poster.

Evil: In the Time of Heroes, a Greek zombie horror comedy with half the action taking place in Ancient Greece. Frankly this film looks absolutely nuts.

Halligan and the rest of the festival organisers are also particularly excited to present Brit teens in peril horror 13hrs and will have members of its cast and crew for a Q&A session afterwards.

Other films on the line-up that DN’s looking forward to are:

We Are What We Are (Mexican cannibal family drama – god, those four words look great next to each other!)

Fragment (an Aussie flick about a guy who brings corpses back to life by photographing them, before getting emotionally involved with one)

Dead Hooker in a Trunk (hmm, really could go either way this one)

and Altitude (Canadian film about some friends on a plane that won’t stop ascending).

As well as films on offer there will be various guests, seminars, gaming and a special effects exhibition.  Jump over to grimmfest.com for details.