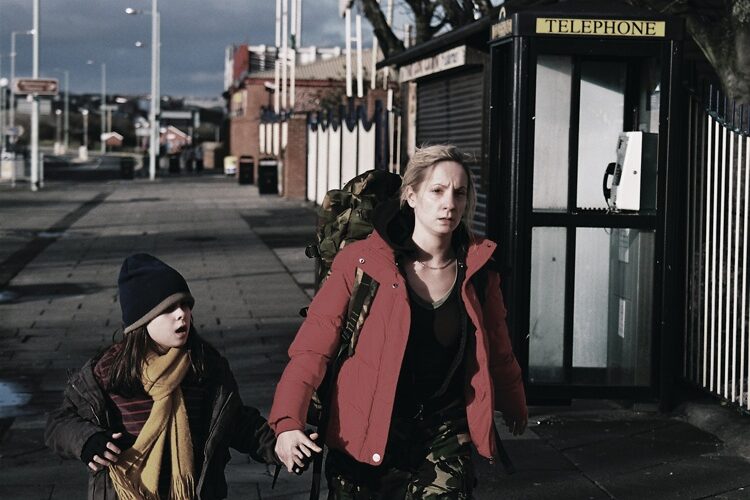 When the 54th London Film Festival programme arrived, In Our Name was one of the films that shone out to me, especially in the New British Cinema category. Described as a tribute to the soldiers returning home from wars with mental problems, I was looking forward to watching the elements of truth revealed by the screenplay. I have to be honest however and admit it’s probably been the most disappointing film of the festival so far for me.

Set in Newcastle, our main character Suzy returns home from the war in Iraq, accompanied by fellow soldier and friend Paul. She receives a hero’s welcome from her family and friends, but it’s pretty clear from the outset she wasn’t expecting any of it and as an audience you can tell something isn’t quite right.

Struggling with her relationships at home, Suzy’s initial paranoia begins to show its light. Her eight year old daughter Cass senses her mother’s changed behavior from the moment she returns. Her reluctance towards affection and sex with her husband Mark, also a soldier, leads him to believe she’s having an affair, more specifically with Paul. As the film unravels, we discover Suzy feels responsible for the death of a young Iraqi girl, with the young girl’s face haunting her conscience she turns her worries on to her own daughter and becomes obsessively protective.

One night after getting into a racist confrontation with a taxi driver, her house is vandalized. Convinced it was the taxi driver, the couple plot an attack which her husband takes too far, leaving the driver paralyzed. Realising Mark is properly their biggest danger, she takes Cass and runs away. It’s at this point that the film goes from OK, to way over the top.

Suzy steals a gun from her barracks, simply walks in unassisted and takes a loaded pistol without being checked again when leaving. Her and Cass end up in a tent in the middle of a wood, Suzy falls asleep and Cass finds the gun, inevitably firing it and waking up Suzy who only then realises how stupid she’s been.

The last third of the film became something I wasn’t expecting. It felt a bit clichéd, a bit unrealistic and quite honestly, forced. Whether it was the performance of Joanne Froggatt that fell short or the story line in general, what I assume was director Brain Welsh’s intention just wasn’t quite there. I found myself questioning the script, her actions and the decisions made rather than being absorbed in the drama.

I feel it’s somewhat essential your audience likes or at least sympathizes with your characters, especially one as important to your script as Suzy. I wasn’t left liking or feeling sorry for Suzy and the same applies for Mark.  The performances appeared weak; I felt myself being very aware of the fact these people where acting at several points throughout the film. Most of these issues certainly stem from the script, Brian Welsh’s debut feature plays host to some very unrealistic dialogue and behaviour by some very two dimensional characters. The few critics I’ve discussed In Our Name with have given me very differing and opposing opinions of the film; one thinks its very good whilst the other considers it a waste in film funding. I don’t consider it either of those things, yet how bad or good a label I want to put on it I’m still not quite sure of. I do know however that it’s most defiantly an overwhelming disappointment from what I was hoping for.