Dear Doctor for me, was one of the surprise favourite films of the festival. Almost missing it, I was advised by a friend to fit it in and I’m glad I did. Set in a mountain village in Japan, a young student doctor from Tokyo comes to work alongside the remote village’s only doctor Ino.

An extremely caring character, Ino is hailed by many of the villagers as God. He’s responsible for all the villagers’ health and responds to all manner of calls in the middle of the night. Like most remote Japanese villages, the majority of its population is elderly and Ino must take the time to visit his patients at their homes. Clearly concerned for all his patients’ health, the young intern Soma is not used to a doctor being so caring. It’s this and the villagers’ gratitude that makes him feel a sense of fulfillment he had never experienced in big city life and soon he too is in love with the village and its people.

One day the two of them treat a widow, who is quite conscious of the fact she is very ill. Too familiar with the pain from losing her husband in an unknown battle, she doesn’t want to put her three daughters through the worry of having to look after her, especially her youngest who is a doctor working  in the city. Ino promises to help the widow keep her secret but when her daughter comes to visit, she soon see’s the signs of her mother’s health problems. It’s a meeting with her daughter that eventually leads to the undoing of Ino. He runs away after realising she has no intentions of visiting her mother in the village until next year, leaving her to discover the truth not only of the seriousness of her mothers condition, also the fact Ino was never actually a qualified doctor at all. 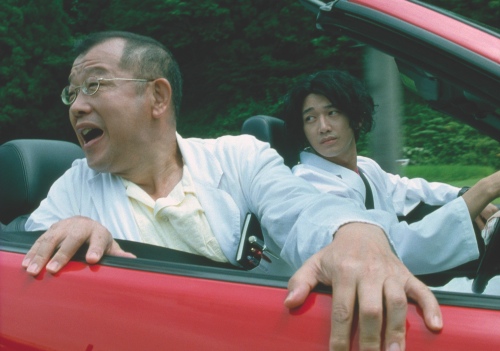 All this is included in a non-linear storyline which starts with the disappearance of the doctor being investigated by two members of the police. Slowly the story is revealed layer be layer and asks many moral questions about the character of Ino himself. Receiving handsome pay for his work in the village, the investigators see what Ino did as a money making scheme, an idea that the others who worked closely with him seem to disagree with.

As a protagonist, Ino is an intensely three-dimensional character who leaves you questioning his morality at many points of the film. It soon became clear to me that Ino was always aware of the fact he was a fake. It’s something that eats him up everyday, yet he decides to just deal with the face to face problems he’s presented with each day. When his young apprentice starts concurring with the villagers’ chants for the doctor, it bothers him. He had never meant to live such a lie, but now feels he has a responsibility to these villagers that he cares about and depend on him so much.

The fifth feature film from Japanese writer and director Miwa Nishikawa, Dear Doctor has won several awards across Japan and Asia. Brilliantly written, acted and captured, this female director comes with a lot of promise for the future. Unfortunately with no UK distributor yet, Dear Doctor is a film to look out for in feature festival line ups.