The first stop-motion animation to compete in Cannes Film Festival’s Official Selection, A Town Called Panic’s eccentric insanity is not what we have come to expect from Cannes’ selection, but perfectly fits the audience-friendly LIFF programme. Directed by the duo who created the Cravendale TV adverts, Stephane Aubier and Vincent Patar breath life into plastic figures in their feature-film adaptation of their Belgian TV series of the same title. Cult following or notoriety had reached the region of Leeds, and the cinema was packed with an eager audience on a Friday night.

The plastic toys named Cowboy, Indian and Horse are the mischievous threesome of town Panic, causing chaos before they even wake up in the morning to begin the story. It’s Horse’s birthday and, of course, Indian and Cowboy have forgotten to buy a present. They order some bricks online to build him a barbeque, but 50 million arrive by mistake, drowning the town with bricks. What proceeds defies narrative explanation – any attempt to do so would come out as some sort of Dada-influenced poem – but somehow starts making some sort of sense as the animated figures begin to construct their own universe. The idiosyncratic movements of the figures, caused by feet stuck together with a fixed platform, catches us with laughter when they move at accelerated speed, and even more so when they speak in high-pitched squeals and guttural grunts. Not much makes sense but it doesn’t matter because the plastic figures are having so much fun, you’re having a great time, and you can certainly tell the filmmakers are enjoying it as well. 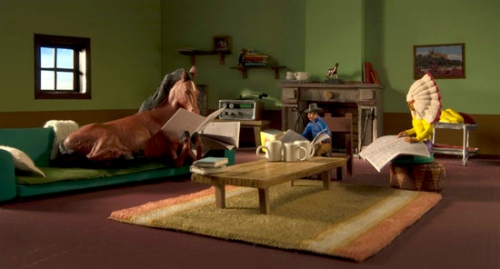 The pace is relentless, almost unbearable, yet somehow not much seems to happen as if the characters were simply running around in circles in frenetic lunacy. But behind the turbulence we find an obsessive passion for handmade animation, a painstakingly meticulous task despite its casual disguise, that allows us to forgive and forget the insane causalities of the irrational narrative. The impulsive behaviour is rare in animation, as the duo explain, “…we’re very fond of the simplicity of our current animation technique as it gives us the chance to actually improvise while shooting and the possibility to be spontaneous is a very rare and precious opportunity in animation.” (Little White Lies) Apparently the film took 260 days to produce and each character had 200 ‘clones’ for various situations; it is no easy task to make something so methodically crafted feel so seamlessly joyous. In 2010 when most animation provides us with an illusion of 3-D, the film is a welcome reminder that we don’t need silly glasses for visionary three-dimension.

A Town Called Panic gets its UK DVD release this Monday, November 15th 2010, through Optimum Releasing.