One of the best films DN caught at Manchester’s Grimm Up North horror film festival was barely a horror film at all, at least not in the modern sense, although it is certainly creepy and horrifying in places. Hélène Cattet and Bruno Forzani’s intensely sensual fantasy Amer is one of most beautiful and thought-provoking films I’ve seen this year. This Belgian film is presented in three parts and covers chapters of the life of Ana (played by Cassandra Forêt as the child Ana and a magnetic Marie Bos as an adult). The first part is her childhood, set in a creaking spacious family mansion with a dead grandfather in one room, and some much feared girl in another. The film is in many ways a homage to the Italian Giallo films in terms of construction and this chapter is heavily indebted to Dario Argento, sharing the brooding malevolence of Suspiria as well as more obvious elements such as camera shots, sound design and lighting techniques. The middle section is concerned with Ana as a teenager, going into town with her mother. If the first scene was deliberately insular, a dark house and family secrets, this is the loss of innocence to the outside world, Ana’s curiosity of trinkets as a little girl has now become more focused on adult temptation. The mother keeps a hold of the daughter’s hand but there’s little she can do to avoid the attention of predatory males. The final part has the grown-up Ana returning to the family mansion, with her sexuality fully formed and destructive. 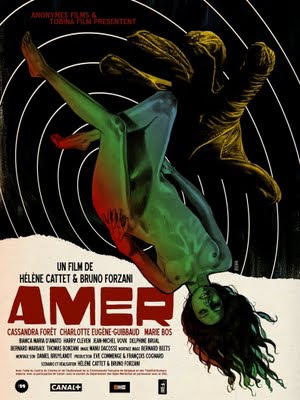 If my description seems to be lacking any clues of plot, that is because there really isn’t one. Things happen to people but this is a film about female sexuality told through the senses. The second two parts are erotically charged to an intensity level rarely seen. It is a film with hardly any dialogue but sound is crucial to the experience. From the fantastic music to the scraping, breathing, stepping, and moaning, the soundtrack tells the story as much as the visuals. Amer uses multiple visual tricks from the start (the film begins with a beautiful three-way split screen shot) right to the finish (point-of-view shots that keep you questioning what you’re actually seeing). There is little point in trying to work out if what you’re seeing is real, since the entire movie is reflecting the personality of the protagonist. You are inside her mind and that is all that matters. If this sounds hopelessly pretentious and too much like hard work, don’t worry, it’s actually very easy to get into the right frame of mind and just let the film happen to you. As much as an art house film where little happens and no-one says much can be, Amer is surprisingly accessible. Only Europeans could produce such an interpretation of female passion, one where the action is split between reality, fantasy and metaphor but without frustrating their audience.

Unlike lesser fare shown that day, the festival audience was silent after the film had finished and I would like to believe that after having been thinking for 90 minutes, they couldn’t tune out enough to clap.