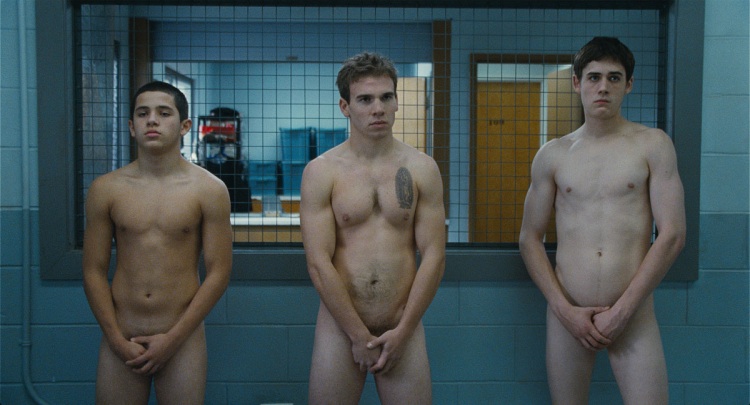 After successfully turning the très beau Vincent Cassel into a gurning, maleficent yokel in the teens dropping like flies horror flick Sheitan, writer-director Kim Chapiron has turned his eye away from devilish terrors and towards the brutal realities of the American juvenile system in his second feature Dog Pound.

Loosely based on Alan Clarke’s 1979, controversial film Scum – right down to the sharing of some character names – Dog Pound charts the arrival of three new inmates, Angel (Mateo Morales), Davis (Shane Kippel) and Butch (Adam Butcher), at the Enola Vale Youth Correctional Center. The boys are in for a variety of crimes such as drug possession and car theft, but it’s Butch who draws the most unwanted attention from guards and inmates alike for his attack on a correctional officer in a previous institution. This, we are told, is not a place for violence, however it becomes apparent very quickly once ‘top dog’ bully Banks (Taylor Poulin) makes his presence felt, that violence is the only universally accepted currency on the inside.

As a fan of Clarke’s original and its introduction of Ray Winstone in the lead roll of Carlin, my initial thought was that Dog Pound would surely be an unnecessary prettying up of an already well told story. Whilst there’s little here to surprise those familiar with Scum, or any prison drama for that matter, Chapiron updates the muted tones of his source material, with vibrant colour and a kinetic energy that moves us along to the climatic riot scene and intentionally ambiguous ending.

The liberal use of improv and a mix of professional and non-professional actors – Taylor Poulin was only a few days out of juvey before joining the shoot – probably go a long way to explaining Chapiron’s ability to pull such naturalistic performances from his cast of unknowns. However, it’s Adam Butcher’s intensely focussed, calm to explosion, “Don’t do that again!”, performance that makes Butch’s unability to stay the ‘head down’ course for just a fortnight so convincing once things are set in motion.

Dog Pound may be lacking the social commentary of its predecessor – there are no Archer style depravation discussions to be had here – but through casting and directorial technique, it’s a film elevated from a simple remake to a piece worth watching in its own right.

Dog Pound is out now on DVD.