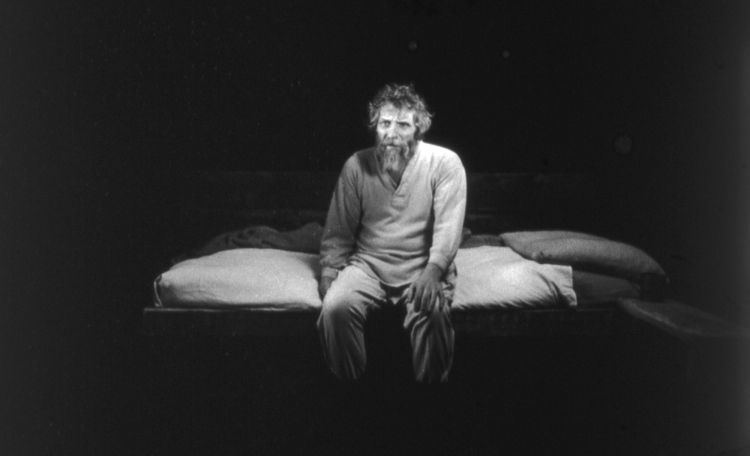 Even in a world where festival programmes are full to the brim with works belonging to the so-called ‘slow cinema’ form of arthouse filmmaking, the Hungarian director Béla Tarr undeniably remains a unique visionary. His seven-hour Sátántangó has been described as the Holy Grail of the dedicated cinephile, and few filmmakers have ever attempted, let alone succeeded, in creating such poetically powerful work on such a large scale. Like many of the great cinematic artists, Tarr has been prone to leaving long gaps between his films, so it comes as no surprise that The Turin Horse – his latest, much-delayed project – arrives as it does under a wave of anticipation. Anticipation further fuelled, perhaps, by his declaration that it will also be his final film.

Like all of Tarr’s mature-period work (from 1988’s Damnation onwards), The Turin Horse begins as it means to go on: with a long take of immense and mesmerising beauty. Here the image is preceded by narration which plays over a pitch black screen, telling the story of German philosopher Friedrich Nietzsche’s descent into madness, and the horse that may have caused it. When the crisp, black and white image bursts onto the screen, it comes at us like something from the primordial ether: the motion of the horse pulling his owner’s cart recalls both the birth of cinema (Muybridge’s zoopraxiscope discs), and the birth of time (especially the windy mists through which the horse trudges on). To expand more upon the Genesis metaphor here would be to say too much, so suffice it to note that the image’s biblical quality can surely be no accident.

As the breathtaking shot reaches its conclusion, the horse and owner arrive home, and from here the film settles into a focus upon the daily routine of the owner and his daughter. It feels safe to say that those who thought that Tarr’s previous work, 2007’s The Man from London, was spoilt by too much plot will not find the same problem here. Much like Kaneto Shindō’s equally masterful The Naked Island, the film’s focus is on the minutiae of day-to-day life: cooking, eating, fetching water from the well. And yet, for all its near-wordless, repetitious simplicity, there’s something darker at work. Late at night, the horse owner asks his daughter if she can hear the woodworms. She can’t. They’ve stopped. From this simple moment there arises a terrible sense of foreboding, a sense matched and enhanced by Tarr’s long-take style. The accrual of time within his images, and the empty frames with which they so often end, can’t help but lead us to wonder what will happen next. Indeed, it wouldn’t be reaching too far to say that the film plays out like some kind of minimalist, subversive thriller. The endless howling of the wind (which can’t help but recall the building sense of drama in Victor Sjöström’s 1928 silent The Wind), only adds to the increasing tension. Tarr has stated that his main intention with the film was to allow us to watch life, see how it is “going away“, and convey the sense that sometimes it feels like something is wrong, all of which he has undoubtedly achieved incredibly well. 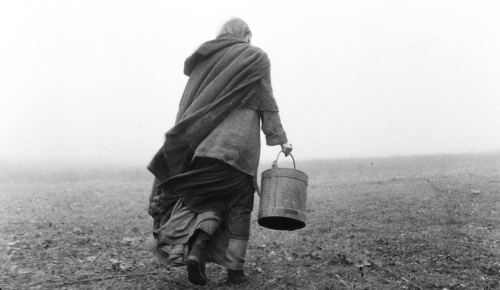 But when Tarr says that this is all he wished to say with The Turin Horse he is surely underselling the film’s philosophical richness. Although Nietzsche makes no appearance in the film beyond the opening voice over, his ideas run throughout: humans, not God, are to blame for the state of the world. Everything is in the hands of man and we have debased all that we have touched. Without God there is no objective good and no objective evil. We must judge ourselves. Tarr, like Nietzsche before him, appears to be saying that we have to revaluate life without referral to God, and find value within life itself, within what Tarr has referred to as “the unbearable heaviness of being”. Tarr may have once claimed that there has been a shift in his work away from the ontological towards the cosmological, but in this concentrated study of man and his place in a world unravelling around him, he has perhaps found the perfect balance of the two. Much has been made of the film’s bleakness, and Tarr’s Kundera-inspired quip perhaps only feeds into this. Yet, for those that want to find it, there is hope here too, not least in the film’s enigmatic ending.

There’s no denying that, narratively at least, The Turin Horse is a strikingly minimalist work by any standards, including Tarr’s own. Stylistically, the film also strips away the baroque excess of The Man from London and Werckmeister Harmonies (2000), in favour of what feels like a simpler, sparser, less kinetic mode of filmmaking. While this restraint feels cohesively appropriate given the content of the film, it also denies The Turin Horse the grandeur of the earlier films, meaning that, while the film avoids the narrative traps of The Man from London, it also never quite reaches the dizzying heights of Werckmeister Harmonies‘ non-stop waltz. However, while it may not ultimately be Tarr’s masterpiece, The Turin Horse offers further proof (if it was ever needed) of his complete and utter mastery of the cinematic medium, and feels like a fitting conclusion to a career which has, quite simply, crowned Tarr as a singular visionary working on a different level from all other living filmmakers. Tarr claims that, having now given up filmmaking, he will open a film school whose primary philosophy will be “do it the way you want“. It’s a philosophy that Tarr has certainly followed throughout his own career, and one which has led to one of the most unique and perfectly crafted oeuvres in the history of cinema.