For a certain type of person, there will be much to enjoy in The Last Circus. Its strong cartoon violence and descent into surrealistic craziness will no doubt ensure it cult status. But those of a more sensitive or moral disposition, or even those who just look for tonal consistency, will no doubt find it a problematic piece for a number of reasons. Perhaps it’s true that hindsight helps: when one knows where the film ends up it’s easier to swallow where the film begins, but its mixture of extreme stylisation and real world politics nevertheless remains troublesome. In many ways, the excellent opening titles stand as a perfect microcosm for the film itself: exciting and arresting, but confused and muddled – war photographs and images of Hitler share space with Grünewald’s Isenheim Altarpiece, Boris Karloff’s Frankenstein and Max von Sydow’s Ming the Merciless. This random barrage of images is never contextualised by the film itself, and the von Sydow image is anachronistic to the film’s 1973 setting. Even here, it seems, the film is more concerned with style than it is with substance or sense. 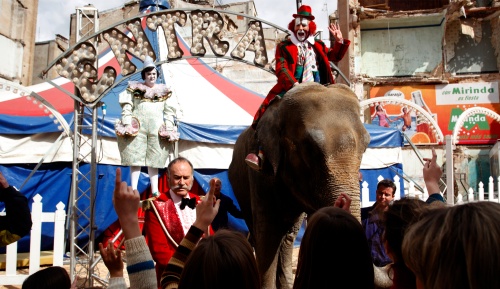 Before settling upon the end of the Franco regime as its political background, the film spits out an extended sequence which takes place in the 1937 Spanish Civil War, beginning with a troupe of clowns being armed and forced into battle. Already the problems begin: the horrific nature of the events depicted throughout the sequence jar with the cartoon-like approach to the extreme violence on display (“A clown with a machete. You’ll scare the shit out of them”). Yes, it’s true that the film never aims for realism and ends in total surrealism, but if director Álex de la Iglesia’s intended to make something totally divorced from reality then why reference real-world politics at all? Evidently there’s a metaphor here, but whereas, say, X-Men: First Class used its holocaust-set opening to add genuine depth to its proceedings, Iglesia bungles his subtext, burying it under a level of sadistic action. At times it feels like Iglesia doesn’t quite know what film he’s trying to make: after the violent, war-torn opening the film switches gears to become a clichéd love story, before abandoning all reality in favour of pure nightmare. In addition to this tonal unevenness, the film is further hampered by jokes which fall flat.

Yet, despite this moral ambiguity and failed cohesion, the film’s frantic pace and quirky unpredictably keep it interesting, its narrative and visual excesses amusing as much as bemusing. Antonio de la Torre gives a compelling performance as the violent drunkard Sergio, while Carlos Areces’ Sad Clown makes for a genuinely memorable anti-hero. Nasty, senseless, offensive,  excessive and mindless though it may be, the fact that it all builds up to a gripping and brilliantly downbeat ending means that, in spite of it all, one can’t help but feel a certain level of guilty enjoyment seeping in…