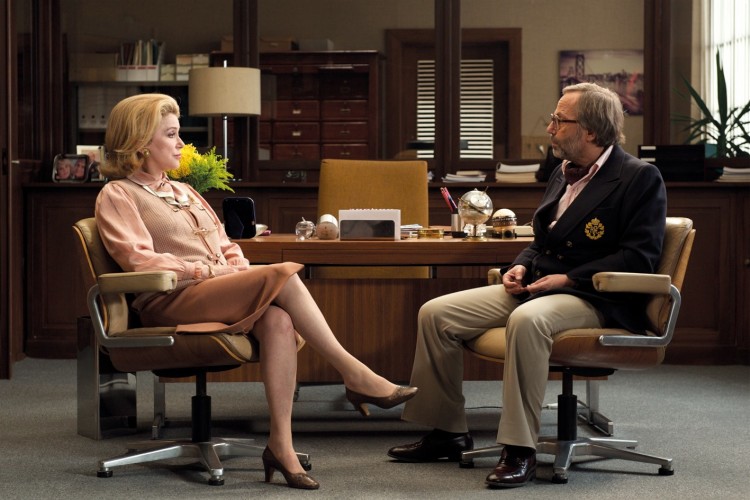 The romantic comedy has had a comeback of sorts over the last few years. We say ‘of sorts’, because whilst every attractive person in Hollywood has starred in a one recently, there’s been a drought of on-screen chemistry and that lack of anything resembling genuine passion is the difference between a ‘Golden Age of romantic comedies’ and a ‘glut of chick-flicks’.

Potiche is a farce rather than a rom-com but without the utterly convincing relationship between Catherine Deneuve and everyone’s favourite aeroplane carpet botherer Gérard Depardieu, François Ozon’s Potiche would be a lesser film.

Set in 1977 and adapted from a hit play of that era, Potiche tells the story of Deneuve’s character, the eponymous ‘potiche’ (‘trophy wife’), Suzanne Bujol. Her husband, Robert (Fabrice Luchini) runs the local umbrella factory started by her father and is injured when taken hostage by the militant, downtrodden workforce. Suzanne then takes control of the factory in his absence and confounds everyone’s expectations by proving herself a canny but conscience-driven businesswoman. Depardieu plays Babin, the local ex-union leader mayor, who has a history with Suzanne and a desire for her that has never left him.

It’s easy to see why Depardieu’s character is so besotted with Suzanne. She is filled with a quiet determination. A lifetime of stoic obedience to lesser minds and greater egos hides a shrewd intellect in direct contrast to both her husband’s temper and Babin’s unconcealed passion. The men in her life are outwitted at every turn, blinded both by their chauvinism and by their devotion to Suzanne. 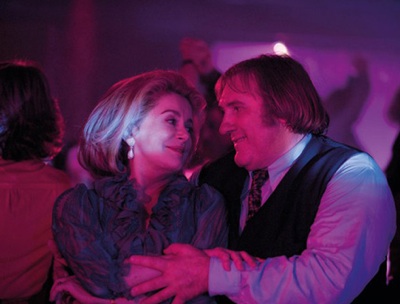 The film throws itself into its time period with precise attention to detail and the visual style of 1970s television film-making. The colours are resplendent and bright and the wardrobe contains a bewildering amount of authentic and outrageous fashion adding a considerable amount to the film’s sense of playfulness.

Potiche’s charm lies not just in the nostalgic aesthetic but in its sense of innocence. There is sexism but it is of a pleasingly old-fashioned type, not the insidious modern sort that’s dressed up in the double-speak of our time. Here, secretaries exist for more than dictation, and a slap on the bottom goes without comment. However in a world where social superiority is based on gender, the men are ineffectual and bafoonish whilst the women are highly capable.

These women aren’t man-haters though. When they take care to protect male egos it’s out of a genuine sensitivity towards the men they love as well as a deliberate manipulation to get their voices heard.

None of this is to suggest that the film is any kind of serious comment on feminist issues. Feminism, like the politics, the clothes and the sets are simply an environment to make Deneuve’s character attractive and plausible. Structurally the film rushes slightly too quickly through a final plot strand, but on the whole this is an enjoyable if inconsequential farce with broadly-drawn characters, a sense of fun and just enough smarts.