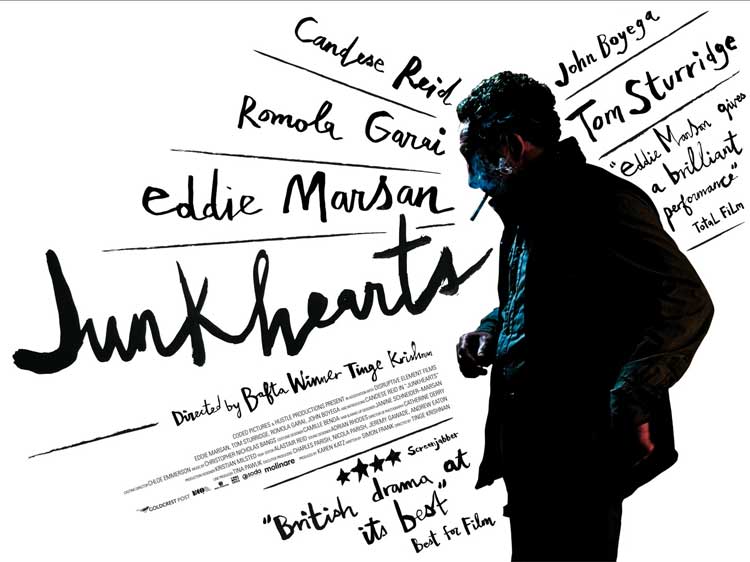 Opening with close up shots of a disturbed looking Eddie Marsan as he greedily swigs from miniature whisky bottles and rummages through the remains of a littered ash tray, the beginning of Tinge Krishnan’s latest work sets the scene perfectly for what’s about to follow. This isn’t going to end happily!

London may be a city of culture, a city of opportunities, a place where the streets are said to be paved with gold, but on-screen England’s glorious capital has become synonymous with the dark undertones of British Realism. At the centre of Krishnan’s celluloid tale of big smoke life we find two desperate, tortured souls; Frank an ex-soldier struggling to overcome the horrors he witnessed in combat and Lynette a homeless girl aimlessly stumbling through life, bad decision after bad decision. Initially, when the downward spirals of these two wayward characters entwine, it seems like just maybe these kindred spirits were meant to rescue each other from their meaningless lives. However, the positive impact they have on each others’ lives doesn’t last long and soon both are rapidly dragging each other down a path of destruction.

Candese Reid may have won the plaudits at this year’s London Film Festival, with her performance as cocky street kid Lynette being described as “fresh” and “brilliant” by Andy Harries, Chair of the Best British Newcomer jury. However, it’s Marsan with another assured performance that lifts Junkhearts from being just another tale of hardship and despair. Following on from his recent impressive work in The Disappearance of Alice Creed & Happy-Go-Lucky, Marsan is once again electric in this latest role, his precarious demeanour meaning you don’t dare take your eyes off him for a second. Cinematographer Catherine Derry’s camera never strays too far from Marsan’s scarred face and haunted eyes, circling him like a scavenger waiting to pray on his frail existence, the next time he stumbles and falls

Followers of short film may already be familiar with Krishnan’s style, as the director’s memorable short Shadow Scan not only won her a Bafta back in 2001, but introduced her as a talented filmmaker on the British filmmaking scene. Flashes of the flair she displayed in her award winning short can be seen once again in Junkhearts. This may be a gritty, hard-hitting film, but it’s certainly not a case of substance over style. Krishnan’s feature has a certain swagger and confidence about it that feels as if it’s coming from the capable hands of an assured filmmaker, a director eager to master her craft. Ultimately though, the powerful performances and confident filmmaking can’t hide the fact that Junkhearts feels all too familiar. These are well trodden streets and it’s going to need something a bit more innovative to make them feel fresh and exciting once again.