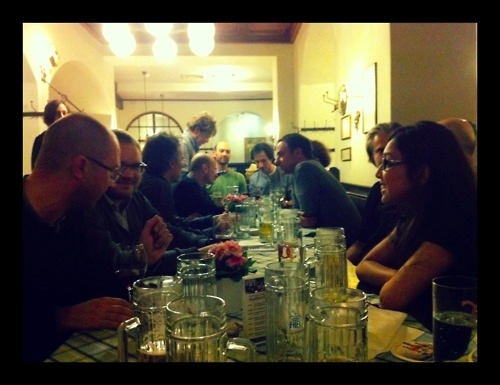 This is the first in a series of posts from Benjamin Wigley & Anna Griffin as they attend the Documentary Campus Masterschool to develop the feature documentary Paa Joe: Dead not Buried.

We arrived in the beautiful city of Munich this afternoon ready for our intensive week of Documentary Campus Mastersclassing.  To welcome everyone to the campus, and the city, the guys at DCM treated us to some authentic German weissbier at Weisses Brauhaus, which is an uber authentic Bavarian bar with lederhosen and sausages!

It was fantastic to meet everyone and chat about all the amazing films.  Really looking forward to hearing more about the projects and the filmmakers themselves.  The team from Clear Water were actually wearing lederhosen. Brilliant.