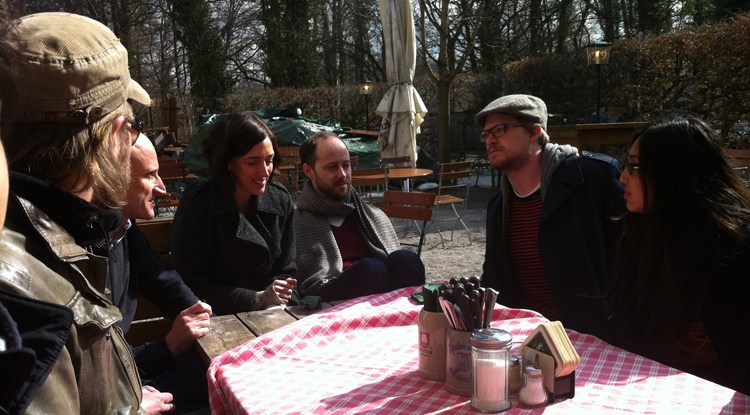 How to: Write Treatments | How to: Titles, Tag-lines and the Elevator Pitch with Mark Atkin

Following last night’s tour of Bavarian drinking culture, today’s Masterclass started an hour later than usual. There were some sleepy eyes and lots of water being consumed as Mark Atkin presented the importance of multi-platform content.

One of the many and really fun examples he showed was Italy, Love it or Leave it, which is also a Documentary Campus alumni project.

With television becoming much more of an ambient medium these days it’s super important that we all think about the two screen format:  having something that your audience can engage with on their computers / laptops / tablets / mobile phones while they’re watching your content on television.

The weather today has been beautiful and so for lunch we were taken to a Bavarian restaurant where we sat in the sunshine and allowed the rays to sooth our tired, or as some might say hungover, bodies.  I stuck to my roots and ordered roast beef with roast potatoes. You can take the girl out of Nottingham…

Feeling refreshed we returned to the class and were taught the principles of good treatment writing. This is such an important part of the development process and something that can be really difficult to get right. Open the treatment with what the film is about and then continue to convey what the film is really about and be sure to include your stylistic vision and two pages seems to be the optimum length.

Our brains were tested right through to the very end as we were asked to pitch other people’s projects in the style of the ‘elevator pitch’.  This is just as important as the treatment, if not more so, as this is what you need to convince commissioning editors to meet with you again.

This has been such an incredible experience and everyone’s projects have progressed exponentially in just five days. Munich has been good to us. With the next campus taking place in Sheffield in June it’ll the turn of us Brits to host our European friends.

Thanks to Ben & Anna for sharing their Documentary Campus Masterschool experiences with us. Be sure to follow their blog, Facebook and Twitter pages for updates of Paa Joe: Dead not Buried.