Initially started as a way to ease my frustrations at never becoming an animator, my on-going series looking directly at the work of established/up-and-coming animators quickly became a way to learn all I could about some of my favourite filmmakers in the short film arena. Running for 18 months and consisting of 17 in-depth features, TheyAreAnimators explored the inspirations, production methods, distribution routes and future plans of a select few working in the world of short animation. With 2013 coming to an end and 2014 in its infancy, now seems like the perfect time to bring an end to this series, with the intention of leaning more towards film specific articles/interviews this year. As a way of closure (I promised myself I wouldn’t cry), below is a recap of all the articles featured in this series – from Hisko Hulsing interviewed in August 2012, to Adam Wells in December 2013. Thanks to everyone who took part in the interviews (I love you all like second-cousins once removed), hopefully we’ll be seeing some more of our TAA filmmakers featured on DN with new work in 2014.

Having “accidentally rolled into animation” whilst studying painting at the Art Academy of Rotterdam in 1995, Dutch filmmaker Hisko Hulsing doesn’t show the signs of a man who has stumbled into his field. Anyone who’s seen his work will be in no doubt that this is a master of the craft, his painterly touch, meticulous eye for detail and aptitude for storytelling shining so brightly throughout his films. Experiencing his work is almost like taking a leisurely stroll around a gallery of paintings, whilst someone recalls the most engaging of stories in your ear. Part of you wants to stop, pause and take in the majesty of the visuals, whilst the rest of you is whisked away, caught up in the twisting narrative and the flow of the story.

The film festival still plays a massive role in what we do and without our continuing attendance at these annual gatherings, our discovery of new filmmaking talent would undoubtedly dwindle. It was at one such festival in 2008 that I stumbled upon the work of talented animator Joseph Pierce – the distinct style and dark humour of his debut short Stand Up sticking with me for some time later. Four years and three shorts later, with Pierce’s career taking confident strides since that first encounter, I thought it was finally time to find out more about his films, inspirations and production techniques.

Winner of the 2012 prestigious Cartoon d’Or award (along with various other festival awards), Belgian filmmaker Emma De Swaef is certainly making a name for herself with her unusual techniques and unique narratives. Over the years, animators have gained a reputation for using anything they can get their hands on to create films and in the world of the animated short, we’ve seen filmmakers employ snow, sand, balloons and t-shirts as tools for their creative masterpieces. De Swaef has taken this ingenious use of materials to a whole new level and carved out her very own niche by utilising wool and textiles to create one of the most distinctive, breathtaking styles you’re ever likely to see on screens big or small. With her latest short Oh Willy currently touring film festivals worldwide and only just missing out on an Oscar nomination, we talked inspirations, wool and future projects with one of animation’s hottest properties.

Having grown up on a small farm on the remote Scottish island of Sanday (an island with a population of around 400 people), where she spent her childhood riding horses, playing in ancient burial sites and walking on unspoilt sandy beaches, it’s easy to see where the inspiration for Selina Wagner’s animations comes from. With films centring around myths and wildlife, her upbringing surrounded “by the natural forces of the weather and sea” have obviously played a large role in moulding her creative output.

“When I was a little older my best friend Billy and I would talk about becoming animators but I don’t think we really understood what it meant – we just knew they drew cartoons. I veered away from that idea in school – I kept drawing but thought maybe I would be an engineer or an architect; it seemed a bit more realistic. I changed my mind before finishing school and haven’t looked back. I suppose initially I was attracted to the idea of drawing for a job. Filmmaking and storytelling came afterwards but soon took over.”

This entry in our TheyAreAnimators series really puts the focus on the “they”, as we talk all things animation with not one, but three talented filmmakers. The Moth Collective is a London-based award-winning animation/illustration collective set up by three graduates of the Royal College of Art. ‘Mothsters’ Dan, Dave and Margot join us to talk working as a collective, studying at the RCA, the buzz of screening in front of a festival audience and being persistent like moths. 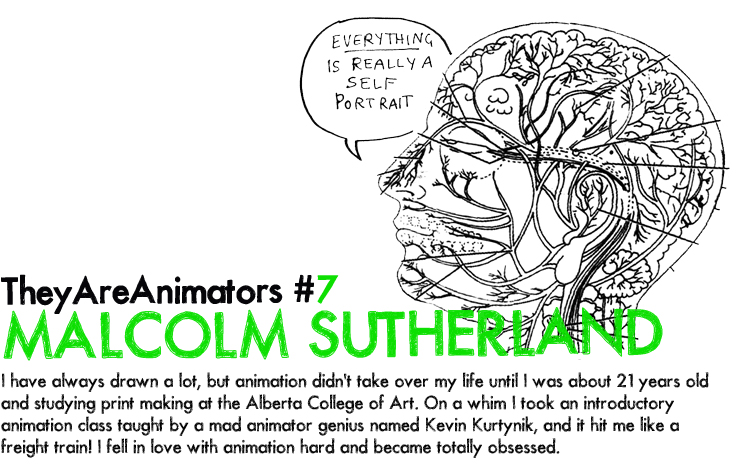 With a first festival outing in 2002, when his short Robot City played the Ottawa International Animation Festival, Malcolm Sutherland’s consistent output has seen his films continue to tour film festivals around the world for the past 10 years. In fact Sutherland’s films have screened on every continent around the world – if you don’t include Antarctica (I’m guessing there aren’t a lot of festivals there?), meaning if you attend animation festivals, you’re probably already a fan of his distinctive style.

When I think back to the films that kickstarted my fascination with the animated short, Jeremy Clapin’s Skhizein is one that instantly springs to mind. His creative storytelling and strong visual flair for me summed up all that is great with the almost limitless medium. Nearly five years after first experiencing Clapin’s work, I finally got round to speaking to the French filmmaker with the hope of discovering a little bit more about his production methods and his approach to animation.

If you’re a fan of animated shorts, then you’ve probably already heard rumblings of a super collective of talented animators operating under the moniker Late Night Work Club. Eager to find out who they are and what they hope to achieve, we spoke to the man who describes himself as “kind of the de facto organizer for this thing”, Pittsburgh-based animator and illustrator Scott Benson.

Announcing himself on the animation scene a couple of years ago with super-playful graduation film Fluffy Mc Cloud, creative filmmaker Conor Finnegan has gone on to make commercials for Lush and Auto Trader, whilst his latest short Fear of Flying has toured festivals around the globe since its premier at Galway Film Fleadh in July 2012. With memories of his most recent film still floating in my mind, I spoke to Conor to find out about his route into animation, his production methods and plasticine dick jokes.

Not content with making some of the most innovative animation seen in recent years, eccentric creative-type David OReilly seems to have so many fingers in so many pies, he’s going to need to some more fingers very soon (something I wouldn’t put past him). The world’s first twitter based comic, a ‘lifestyle brand’ for teens, a creative commons 3d model of Walt Disney’s head, a time-wasting game, you name it, OReilly’s probably done it. Following on from our focus on his Adventure Time episode A Glitch is a Glitch, we decided it was about time we found out a little more about his work so far.

The first time I ever saw the work of Kristian Andrews, I was struck by how his short films Rabbit Punch and Bald Dad made me instantly drift away to my own childhood memories. His autobiographical films, created whilst studying at the Royal College of Art, feel like the embodiment of British childhood for someone of my generation – when as kids we spent as much time outside as possible. We were determined to delve into the animator’s headspace by inviting Andrews to become the latest filmmaker featured in DN’s TheyAreAnimators series.

At its best, short film can move you and elicit emotion as well as any feature film you’ll encounter. Unfortunately, these powerful moments in film (short or feature length) can all too often be few and far between. After a recent viewing of Eoin Duffy’s striking animated short On Departure, a film about returning home after the loss of his younger brother Emmet, I found myself gripped by one such experience. Battling to hold back the tears as Duffy’s gentle masterpiece dragged me into a world of personal reflection at the end of its five minute duration I was torn between two impulses – one urging me to press play again, the other willing me not to. Even though I was aware of Duffy’s work before I’d viewed On Departure, after watching it I just had to know more about the work of this accomplished animator. So I dropped Eoin a line and took a journey into his creative process – from inspiration to education, Roger Rabbit to George Takei.

If you want to grab the attention of the right people in the short film arena, winning a BAFTA is certainly one way to go about it. Collecting the award for Short Animation in 2013, Will Anderson and Ainslie Henderson’s unique short The Making of Longbird wowed the panel with its ingenuity in concept and style. But where do you go after winning a BAFTA? We speak to the creative duo about their work as production company White Robot, find out what their specialist skills are and discover what’s next in their ever-expanding catalogue of work.

Stumbling across the work of animator Michael Frei on Vimeo earlier this year, I was instantly impressed by not only the filmmaker’s playful visual style, but also his abstract approach to narrative and storytelling. Conceptually and tonally, Frei’s work is experimental in nature but more importantly, his films hold that rare quality we’re always searching for here on DN…uniqueness. In this on-going series, in which we explore the minds and processes of our favourite animators, we speak to Frei about filmic vocabularies, setting rules and his finger obsession.

As a regular dweller on Vimeo over the last couple of years, the name Adam Wells has been one that pops up in my feed and the feeds of many others with alarming regularity. With three ‘Staff Picked’ shorts in the last 12 months, animator Wells’ distinct style (it’s so recognisable you could almost call it ‘Wellsian’) and prolific output have made him a filmmaker pretty hard to ignore in the short animation arena. With this in mind, I invited Adam to join the ever expanding list of filmmakers to feature in our TheyAreAnimators series, to find out exactly how he manages to produce such a prolific amount of content and how he developed that style of his.