Tonally reminiscent of The Wonders Years and Stand by Me, Felix Massie’s latest short In The Air Is Christopher Gray has classic coming-of-age tale written all over it. Telling the story of titular adolescent Christopher and his exuberant attempts to catch the eye of the girl he fancies, this hazy summer story features daredevil stunts, a rampaging snake and a heavy dose of young love.

Christopher Gray has been in love with Stacey for quite some time, and no amount of lemonade can cool his desire. Meanwhile, Barry Flint has just bought his son a five-foot python from the pet store.

It feels wrong to talk about Christopher Gray without first talking about your University of Wales graduation film Keith Reynolds can’t make it tonight – which stylistically worked as somewhat of a precursor to your latest short. Like your recent film, it’s an animation with a distinct style and narrative – where did the concept for the short come from?

I knew I wanted to do something simple. And I was in Joe Paine’s room (the musician guy) and he had a notepad where he’d written, “Keith Reynolds can’t make it tonight” on it as a note to his mum when he’d been home over the summer. I thought it sounded like a classic old film title. I don’t know why but I read it out in an American accent and then started writing a story about a man called Keith Reynolds who was supposed to be doing something one evening but events in the day meant that he couldn’t make it. I played around with that idea for a while and, probably through watching episodes of The Wonder Years, it grew into what it was.

Keith Reynolds can’t make it tonight introduced us to your trademark “stickman” style – where did the idea for this aesthetic approach come from?

When I started animating on the computer I ended up making very simple GIF animations to put online. This was in the early 2000s, in the dark times of 56k modems, so the filesizes had to be small, meaning stickmen were perfect. I made a website called i can’t colour in (still exists today!) and there was a whole community of people like me who made stickman animations. They didn’t have sound or fancy textures to begin with so you really relied on humour and just making them interesting with very simplistic ideas.

At university I played around with using more elaborate designs, but I’d found that there was something really special with the simplicity of using stickmen and something powerful about keeping them anonymous. I think when you’re watching a film you are essentially watching a stranger do something. It’s what they do, think, and say that makes them familiar to you. In that way you can pretty much just have a blob on screen and connect to it in some way. I think that’s cool.

This stickman style returns (after a bit of break) in your latest short – how have you developed the style since we first saw it?

I suppose this is the first time the characters have spoken themselves, so they’re maybe a bit more expressive than they have been before. I also moved to London where I now work at Nexus Productions. That really made me want to push the visuals with the backgrounds etc. more than I think I would have done: the work here is amazing and I’d have been a bit embarrassed to show them otherwise!

Along with the visual improvements, your latest film also displays developments in your approach to storytelling, feeling like your most layered plot so far. Where did the story for In The Air Is Christopher Gray come from and how do you think your narratives have improved from your earlier films?

The story started with a little drawing I did of an Evel Knievel style guy about to jump a giant snake on his motorbike. I just liked the image. Then in the real world I’d just told a really good friend that I liked her more than that – and it didn’t work out like it does in the films! I ended up taking a trip to New York for a film festival and to do some research and I ended up thinking about that a lot, and also about misplaced affections and things like that… and the film just came out.

As far as narratives improving: I think I’m just getting older and I’ve done it more times! Perhaps I’m getting a bit more ambitious and making the stories a bit more complex too. 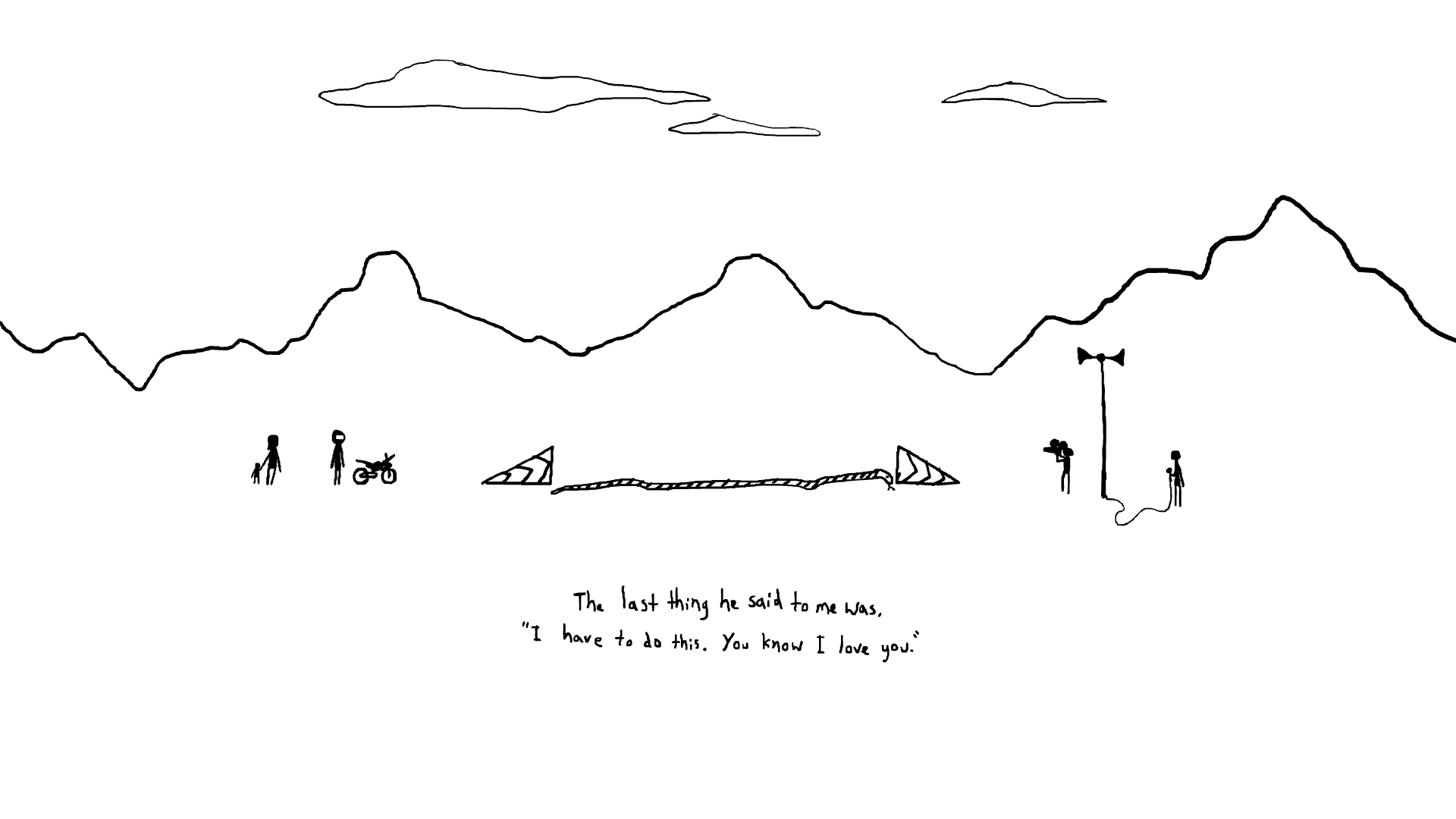 Even though I was totally wrapped up in the narrative of your film, visually I found myself asking the same question over and over again – with your characters lacking detail, are the colours important and do they represent anything in particular?

The colours are chosen in a similar way to the names for the characters: just what I feel fits their personality. The background kids are just grey; that was because their personalities weren’t important – they just need to be there. I don’t know if you saw Saving Mr Banks where Disney/Tom Hanks is explaining that the Mr Banks has to have a moustache because that is what the Mr Banks in his life had. Bit similar to that I guess, but less personal. Different people make you think of different colours and different names mean different things. As clichéd examples: Bruce is more macho than Billy; and Claire is prettier than Rachel; but Rachel gets better grades. Same way that a red is quite a strong supporting colour. A light blue is slightly melancholy and pondering, masculine or boy like. Greens make you think of jealousy and sometimes sickliness. I’m basically trying to get someone to match each character with someone they already know, using as little as possible.

Can you tell us a bit about the tools you tend to favour to create your animations? Do you always use similar production methods or do you like to mix it up on a film-by-film basis?

My films have always been low budget productions, where I’ve done the majority of the animation myself, so I tend to stick with what I know best which is Flash – I’m branching out into slightly more ambitious 3D After Effects stuff with this one though. I’m hoping I improve technically a little every film.

As you just mentioned, budget is always an issue for filmmakers, how do you go about financing your work?

Most budgets for short animations are so small at the moment that I prefer just saving up from doing commercial work and trying to fund the films as low budget with my own money. You get more freedom – but having said that I’m not always comfortable asking for favours and without deadlines productions can get quite long. I do my best bribing people with pints of beer though and I’m lucky to have met some lovely people who have helped.

You’re part of an impressive collection of directors at independent production company and animation studio Nexus – how has being part of Nexus affected the work you do?

As I said earlier, there are so many talented people here from all over the world, so I definitely push a little harder to at least try and keep up. It’s also great having feedback from so many people whose work you respect. It definitely helps with your levels of ambition.

I was lucky enough to first see In The Air Is Christopher Gray at the Encounters Short Film Festival here in the UK (where it won the ‘Grand Prix’ award). Once your shorts are completed, how do you approach the tricky stage of distribution? Is your aim always to enter them in festivals or are you more than happy to launch a film directly online?

Usually the films have done a year or two going around festivals and then I’ve put them online. I know it’s nice to get the comments on the Internet but it’s such an interesting experience to see the film in front of an audience (and to see it in a programme of other films too). Additionally, making a film already involves a lot of sitting in front of a computer screen, so it’s nice to sit in front of a silver screen for a change.

How do you feel the festival scene compares to the world of online distribution?

There’s nothing like watching your film in a theatre to make you realise what does and doesn’t work about it. Unfortunately, by then it’s too late to change but it’s still useful for next time! You don’t get that with online distribution. As an experience for a filmmaker and to learn what works/meet people then I much prefer festivals. To get the most people to see it then online is clearly the best.

So what’s next in the pipeline? And where’s the best place for people to go to keep updated with your work?

I’m working on a new small short to try and get something else out in 2014. I’m also trying to write some feature scripts. It took me a few months to reply to this interview though, so at this rate it’s looking like I will be saying that sentence next year too!