“There’s an Event Going on in There” – For No Good Reason: A Documentary About Ralph Steadman 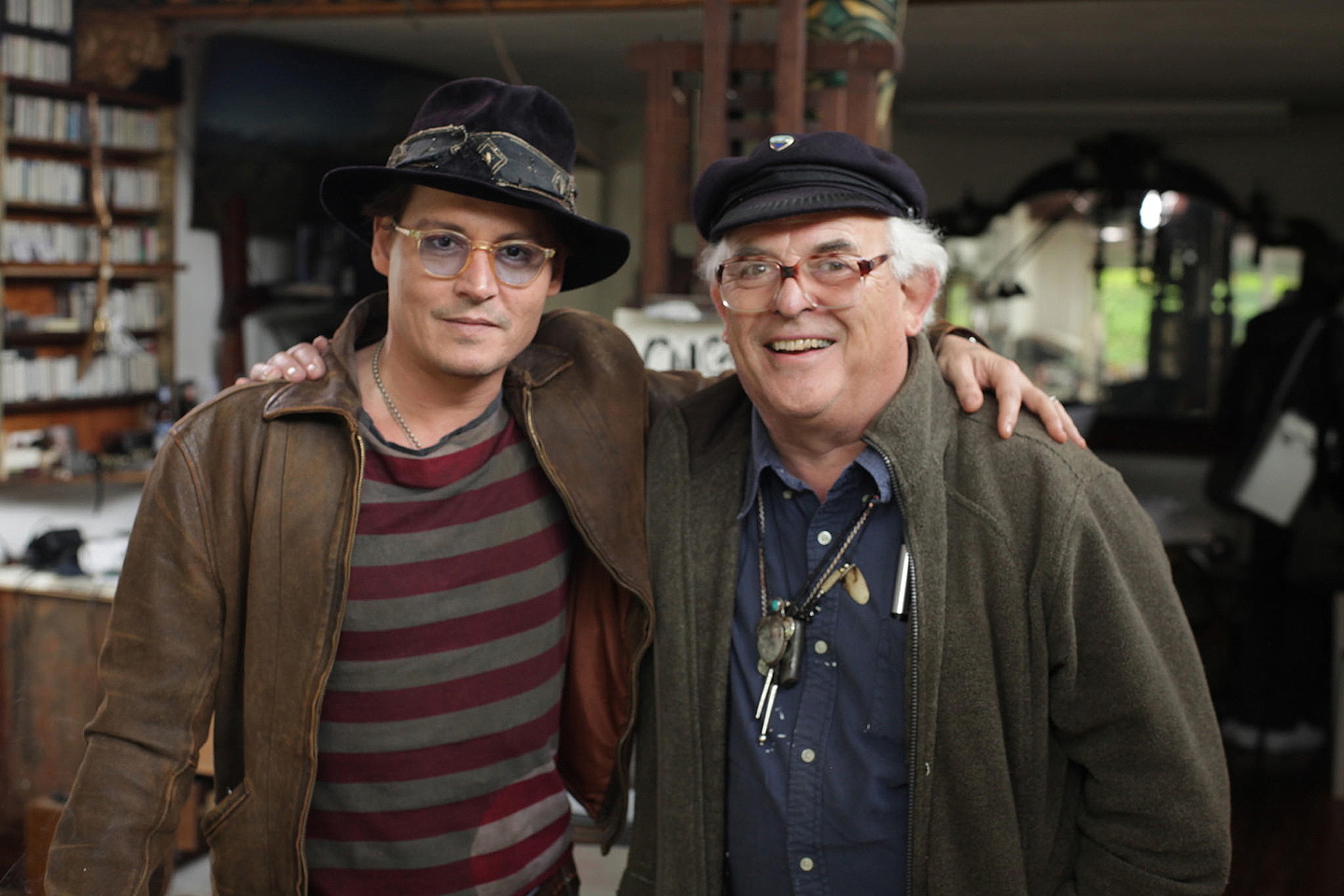 The violence of the ink, the scratch across the parchment as jet black indian ink sprays and is cajoled into place is all indisputably Steadman and the film is like his art, an affable blend of the ramshackle and the deeply precise. Taking mostly the form of a conversation between the artist and friend/fan Johnny Depp (incidentally this is the best film Depp has been in for years) and intercut, collaged with, pasted over by archive, animation and recreation it uses a range of devices to tell its story and reveals through its form the myriad complexity of personality and skill that sit at the heart of the subject, this singular English artist.

Ralph comes across as supremely self-aware and self-critical. So few artists can express the essence of their work so well, or at least shorn of pomposity. There’s so little hubris yet it’s clear that his work is potent, individual and magical if seen through a certain set of eyes and two things become clear throughout the film. The first is a sense of how he sees the physical world and how his art is merely a translation of visual and emotional connection on to the page. The second is a balance between a viciousness and hope that flows into his work from a mix of anger and genuine kindness in his life. To gain an understanding of how this artist works and then see it in action is one of the triumphs of the film and the sequence where we witness him create a piece from scratch (pun intended), talking through his process to the point where the final, genius artwork is revealed in all its filthy glory is one of the best accounts of artistic process you could hope for.

What the sequence and much of the film also proves is that when he claims ‘art is just tricks’ and that he goes out of his way to be unprofessional as he wants to make something that is unexpected to him he has earned the right. He earned it through a commitment to his work, a strong work ethic, a devotion to art history and willingness to work within the constraints of commercial commissions and contracts. He is no shirker and the ability to off the cuff produce brilliance is never merely talent, but application. Something I constantly iterate to my students. Next year I may just show this film. 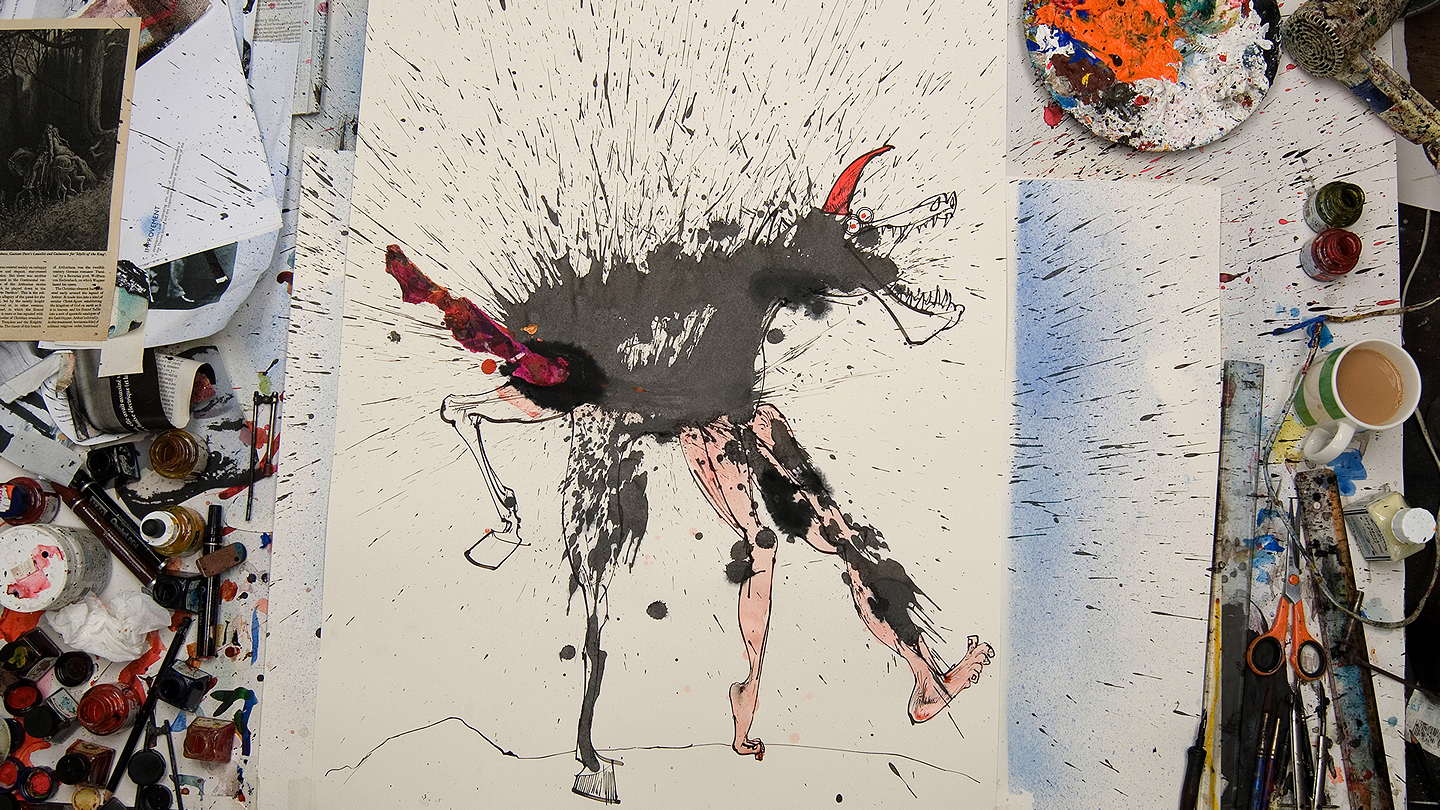 The sequence however is emblematic of where the film may find limited appeal. For fans and appreciators it’s like watching greatness bloom whereas some will see it as a mess of scratches, splodges and demon eyes and won’t see the skill or vision at work but even so, there is enough general interest in the film as an artistic portrait to at least, one hopes, to appeal to those interested in the process of creativity. Also, not many artists could convince that a print of their work with a scrawled signature and limited numbering constitutes an ‘original’ but such is imitable and integral quality of that signature, that scratchy artistry that he manages to do just that. That and his charming and almost childlike honesty about why he keeps so many of his originals.

Hanging over the film is the spectre of Hunter S. Thompson, understandably to a certain extent. Theirs was an artistic marriage of the subdued and the staggering, image and word. It’s emotional listening to Steadman discuss the complexities of their loving but simultaneously rivalry fuelled friendship and the archive footage is a stark reminder of one of twentieth century literature’s most potent creative double acts. Despite being a large core of the film and Ralph’s story it’s not the whole story and contributions and footage involving the likes of Terry Gilliam, William Burroughs and Richard E. Grant – Grant in a segment exploring Steadman’s extraordinary polaroid work – show the scope of his craft and his reach as an artist and I for one hope this film further highlights the importance of his work to satire, political and social commentary and our understanding of the grotesqueness beneath the sheen of the powers that be, whoever they be.

At the start of the film he says he wanted his art to change the world. A bold claim and there’s a melancholy towards the end when he feels that he hasn’t achieved this. However for so many he changed the way we saw the world, this writer included, and that’s an amazing and rare thing to say. He deserves this loving, generous film and we may not deserve him.

Try and see the film in the cinema where Ralph’s work will look sublime writ large and if you are in London check out a screening of the film with the director and producer Charlie and Lucy Paul, and Ralph himself in attendance on 30th May at Curzon Soho. Also you lucky Londoners head to White Space Gallery for an exhibition of his work (30/5 to 4/6 – Free Entry). They are also screening the film on 31/5. Check websites for tickets, details etc.