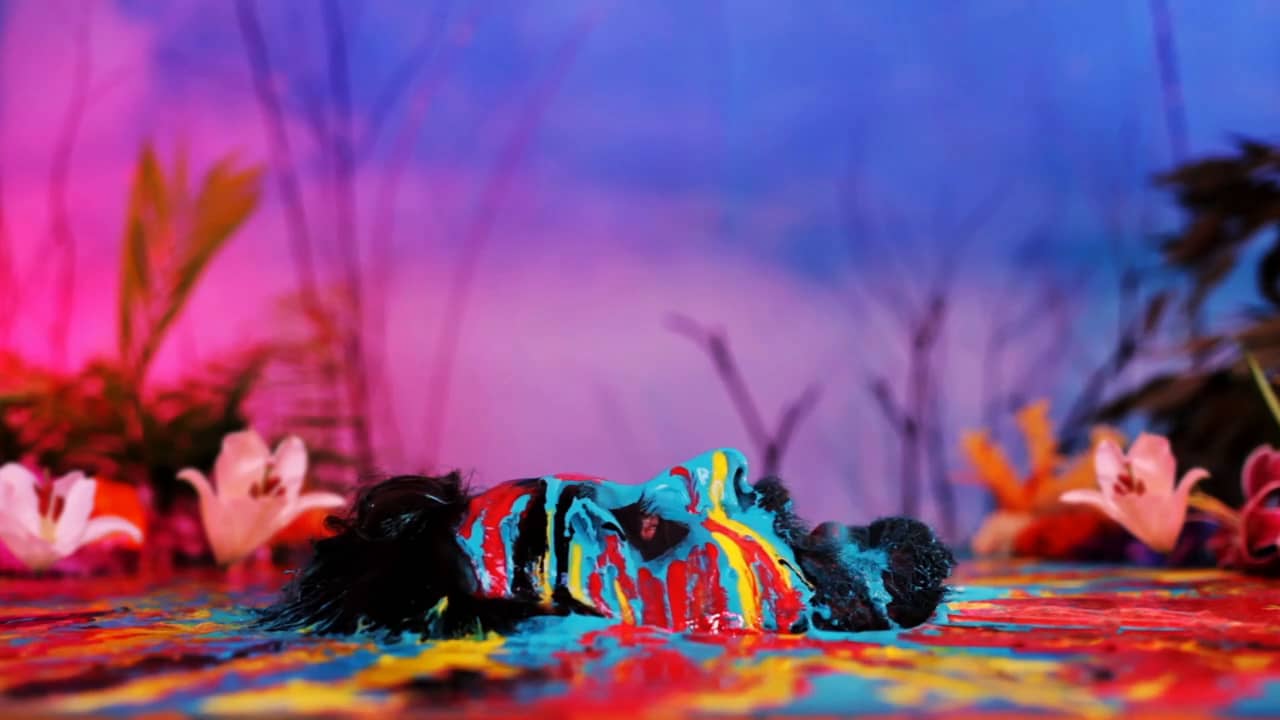 Whilst one of things we love to do here at DN is uncover new filmmaking talent, that doesn’t mean that once you’ve been featured on our site, you’ll never be featured again. Just as much as we love stumbling across a new filmmaker, we love following the career of a director we’ve featured before. One great example of this is Conor Finnegan. Ever since being introduced to the animator’s fun aesthetic back in 2010 with his short film about man’s mixed relationship with mother nature, Fluffy McCloud, the sight of a new Conor Finnegan project is always something that puts a childish grin on our faces.

Having taken to the world of music videos in recent times, we talk to Finnegan about his latest work The Hearts Desire, a colourful, underwater video for Jape.

The video appears to tackle themes of life, nature & evolution, where did the concept come from?

Richie (the lead singer/musician in Jape) and I were throwing ideas back and forth for a while before settling on the idea. Early on I had suggested that the worm/eel guy would be more like a fish, found in a pet shop and then released into the sea where it would go on a quest to be reunited with its one true love (“The Hearts Desire”). But I guess I was taking the lyrics too literally. For me, the line that stuck out most in the song was “allow yourself to breathe”. Richie mentioned that the “Hearts Desire” could be more about wanting to be able to breathe and I think it then took on a sort of “mindfulness-vibes” for me. So it kinda made sense for the creature to be changing a lot at the start- mutating, a bit like a teenager. Then when it goes underwater it can actually breathe and be itself, almost like it had found itself (corny, right?). Then it’s just about racing to the end. And finally, death. But not before seeing some cool stuff along the way! Also Richie had shared the entire album with me pretty early on and there’s a really cool track called Metamorphosis on it – so that also fed into the idea of evolution/mutating, etc. The video’s definitely more inspired by the album than the song alone.

Although The Hearts Desire stylistically shares some aesthetic traits with your last music video for Candice Gordon, this promo features the addition of some performance scenes, what made you want to include the artists in the action?

I really like videos where you see the artist perform, I think it puts their art into context in a way. So there was that, but also (possibly) some laziness? I don’t know that the eel guy swimming through all that water would have held the attention quite as well without the floating heads. Those bits with Richie’s head underwater feel really honest to me, like he’s speaking to his internal self in a way. I also like the idea that the eel guy is a metaphor for the painty-headed guy at the start.

While the painty-head has this cool and quite calm exterior there’s also a lot of weird shit going on inside him. A bit like life.. man.

Speaking of those performance scenes, one of the standout sections in the video is the painted face scenes. How much time and prep did it take setting those up and how did your performer react to being involved in this manner?

That’s Richie, and he was a great sport! He has a recurring thing in his videos of being up for doing weird stuff. In one he gets a lot of fruit thrown at him, in another he dresses up as a goth and hangs out in Glasnevin Cemetery. He showed me the album artwork designed by M&E early on and we decided it’d be cool to try and tie that in somehow. I did a test with loads of poster paint on my hand and sent it to Richie, asking him if he’d be up for having a bit of this on his face. He was up for it so we did it. It was hilarious. We shot all that stuff one afternoon in my studio and I got a friend Mark Duggan who’s a DP and photographer to shoot it. It was a lot of fun. The paint coming out of the stalagmite things was done by filling big syringes with paint and covering them with plasticine, then pushing the paint out.

With a synopsis that states the film was ‘mostly shot on a GoPro in a home-made tank in my back garden, and made from 90% recycled/stolen materials’ it would seem foolish not to ask about the production process – how did the filmmaking-approach come about? Was it inspired by the video’s concept or did the idea for the production process come first?

Their new album is called This Chemical Sea and while I was away for a few days with my friend Conall we were messing around with his GoPro in a rock pool. The footage looked amazing and I still hadn’t had any decent ideas for the video so I thought it’d be cool to try and recreate a rock pool (or a Chemical Sea) in the garden (though technically, it’s my mum’s back garden – I only have a tiny roof garden where I live). Conall helped me build it and it ended up being eighteen foot long, three foot deep and five foot wide. The tank was mostly made from an old fence that had blown down, so we recycled that and then I went around the garden (and neighbours’ gardens) picking out nice looking plants and flowers and rocks and stuff. I drove around at night and stole flowers from the council and even stole some from a convent. It was great fun. Most of the sand was taken from a public beach, though I did buy some fake plants from a pet shop. I recycled loads of the painty bits from the Sound of Horns video too to make the worm/eel guy and all the other underwater creatures.

I even up-cycled the lobster into dinner.

How long did the video take to shoot and what kind of challenges did you face along the way?

After building the tank and getting it filled with plants and rocks and finally water, it burst. The sides weren’t strong enough and after leaving it overnight to fill up, one side came apart and it emptied all over the place. It was a mess so we had to put it back together and reinforce it. It was horrible and really sad, because it had taken a lot of hard work to get it there in the first place. After it was reinforced though, it was totally solid. It got filled up again and then I started shooting. But because it was really sunny at the time (that Indian Summer), the water became really murky with algae really fast. You can see in the video that the shot with the lobster and the shot immediately after that are a bit hazy, but it got really bad and there was practically no visibility. I nearly bought a filter pump but in the end I turned the hose back on at one end and made a syphon at the other. I left it overnight again and in the morning the water was crystal clear. There was a lot of water wasted making it though, and I’d feel bad about that, but Ireland has just introduced water charges (our water used to be free) so getting to use all that water for nothing was a nice “up yours” to all that. I’d do various passes with the GoPro taped to a pole and then move the rocks and stuff around, and shoot a bit more. I think I did that for two days and then I rented the lasers and threw in loads of glitter. That stuff looked amazing to me, so I was pretty happy. Then we shot the stuff with Richie and Glen and the paint and then it was just lots of After Effects. All in all, it was about 8 or 9 weeks from first making the tank to having the video finished but I was away for a bit of that and I started another job in-between. I bought a bunch of goldfish to put n the tank too but you can only barely see one in the video. They were crap and just hid behind rocks most of the time.

Right now I’m working with an animation studio in Dublin, developing some shows and I’m making another Late Night Work Club short for LNWC 2.0 which will be coming in the new year some time.