Seoul based independent Animator and Composer Seunghee Kim’s latest piece Mirror in Mind (SimGyeong) is the product of the filmmaker’s feelings of a shattered life and living with despair. This kaleidoscope of thoughts, insecurities and moments of triumph, allows us to experience the conflict Seunghee holds within and the battles fought to make sense of the world and herself. In essence an improvised piece, Mirror in Mind spills from her mind, flowing beautifully from one character to the next. Birthed from a sentiment many of us can relate to, it’s not hard to see why this attention grabbing film has won multiple awards and as well as being an official selection at Slamdance, Flickerfest, and the London Short Film Festival. Check out our interview with Seunghee in which she talks us through the process of painting her innermost thoughts on screen.

Where did the inspiration for Mirror in Mind originate?

In general, people judge others by external appearance, education, financial status, their job, their choices and so on. When focusing on how others see us, we get lost in other people’s expectations. These expectations deprive us of the opportunity to find out who we really are and I was feeling these constraints more and more in everyday life, so I decided to explore what was happening in my mind to trigger these feelings. Then, Mirror in Mind began.

What were you looking to gain from the project?

I longed to know who I am and accept myself in any state of being. I have made significant changes to myself, but I am also still on the path of self-discovery. 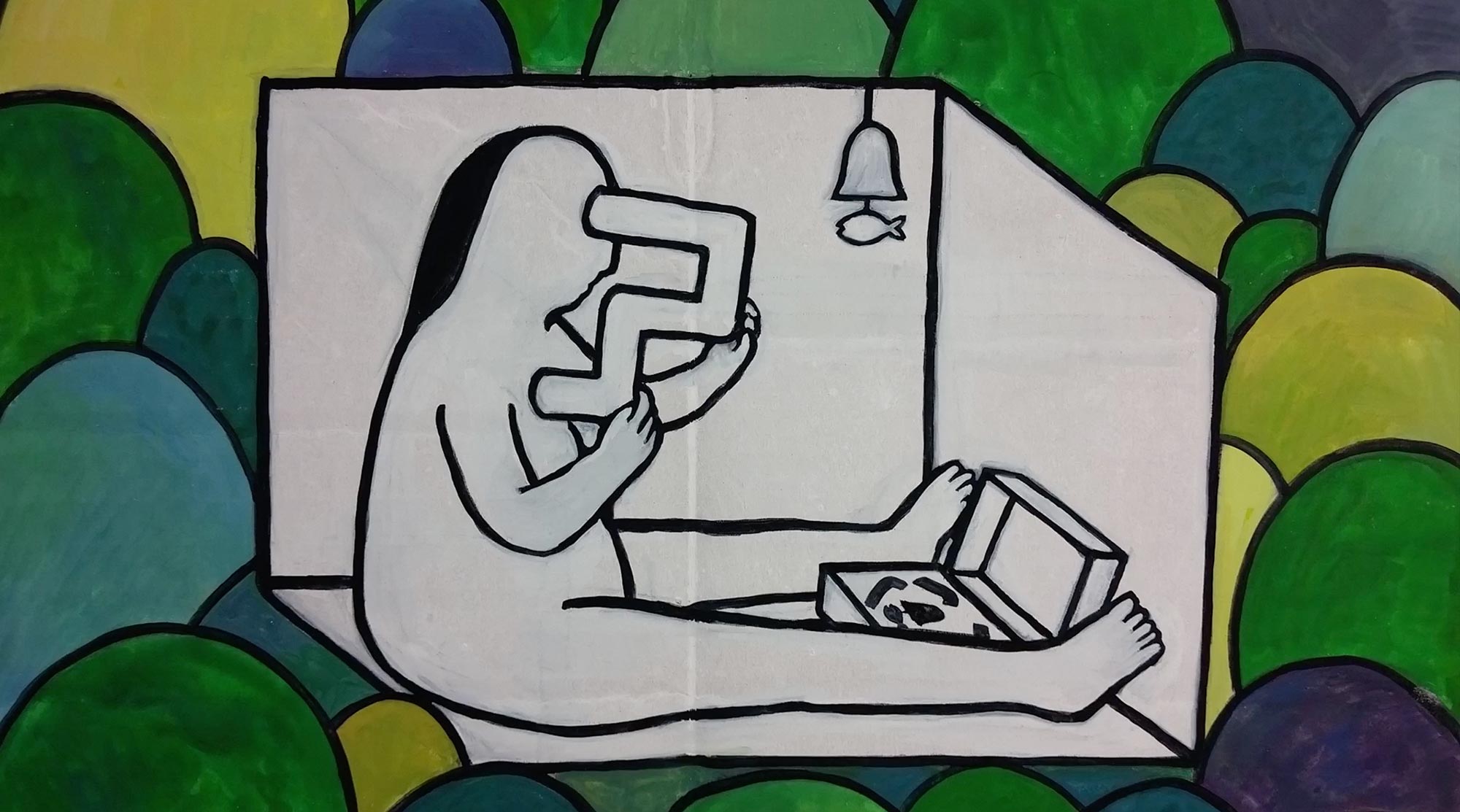 What was your production process?

Mirror in Mind started without any precise plan, such as a storyboard, script or project schedule. I made it with only three ideas, kaleidoscope, strong percussion sound and a theme of ‘imperfection is perfection’. In regard to kaleidoscope, I thought it had some parallels to the way our minds work. There are useless things, such as multi-coloured beads and bits of glass in it. These bump each other making beautiful changing patterns. I thought our minds are formed alike, and we are completed existences composed of imperfect views and thoughts for the world. This idea fits into the kaleidoscope images.

I just grabbed what popped up in my mind, then drew them on paper. The music went through a similar process. I followed my feeling, spontaneously played the musical instruments, then combined them. I used a hand drum to make the main beat and played a melodica, a xylophone, mini-cymbals and a handmade shaker for it. It was shot like a stop motion film. I put the animation paper at the bottom, and piled up cardboard on it, then shot. I changed the order of the cardboard and animation papers for every frame. It took a year and half even though its running time is 2 min 4 seconds, because at that time I had a full time job which was not related to animation. I could only work on Mirror in Mind in my spare time.

I made it with only three ideas, kaleidoscope, strong percussion sound and a theme of ‘imperfection is perfection’.

What helped you to stay focused and maintain momentum during such a sporadic production process?

Making Mirror in Mind was a self-meditation for my soul. I lived an ordinary daily life just like others do, but behind that I was shattered and my life was full of despair. I had gone through some of the hardest moments in my life. The only way to recover and empower myself was completing Mirror in Mind, so I had to keep working on it.

What was the reasoning behind the lack of colour through the body of Mirror in Mind?

It was intended to give contrast. There is no motion in the beginning and end of the film, but dynamic motion in the body. The beginning and the end show my outer self and the body shows my inner self. There was this lack of motion when I was sitting at my desk drawing frame by frame, whereas I could feel the dynamic of my state of my mind. As for the choice of the colours, I think black, white, colours in greyscale used to reflect my soul. It didn’t seem that bright and vivid colours resonate with Mirror in Mind.

I know independent filmmaking has come a long way in Korea over the years. Can you talk about the relatively recent transformations?

It is such a big question. Narrowing down to Korean independent animation, first of all, many animation filmmakers are still producing work although there are limited grants and production support systems, and of course, no guarantee for box office hit. Recently, There have been the attempts to develop web animations again which were booming in the early 2000s in Korea. Also, many Korean animated features and shorts have been in the spotlight over the years (The King of Pigs, Dust Kid, Man on the Chair, Love Game and Deer Flower). They were presented at major film festivals, such as Cannes, Sundance and Berlin.

How does government censorship in Korea affect your work?

When I was making Mirror in Mind, I didn’t consider the censorship of the government, it was more important to set myself free on paper.

The film is a very inward look at yourself and the problems people face within society, are you hoping Mirror in Mind will help to change the paradigm people become lost in? Is this a theme you want to continue in the future?

Changing the paradigm is too huge. I just hope that people can peer into their soul through Mirror in Mind, which reflects the inner consciousness of viewers. There is no precise storyline, and things are thrown in the air, so there can be various and numerous interpretations depending on viewers. Each viewer can gaze into their own mirrors that reflect their minds. When it comes to future work, until second and third works, I will draw the internal scenery of my mind, which is about knowing, understanding and love. Then I will turn my eyes from the inner world toward the relationship between myself and the world.

I am working on my next film, SimSim (the realm of deepest knowing) and I am the animation director for feature documentary, For Vagina’s Sake. Both films will be released early next year.