Let’s face an unpleasant truth, whilst life will inevitably throw obstacles in our paths to trip us up from time to time, if we’re honest with ourselves the largest single impediment is more often than not…ourselves. Personifying this spirit of self-sabotage within the form of a malicious shadow-self, Tomek Pilarski’s graduation short But she’s nice… shows the negative effects of living a solitary life for too long. DN spoke to Tomek about the development and creation of the greyscale, textured aesthetic which reflects the loneliness and longing of his central character.

Where did this story of loneliness as a self-inflicted impediment to romantic happiness come from, and how did it develop into the full narrative?

Short introduction first: But she’s nice… was my Bachelor’s degree at the University of Fine Arts in Poznań in 2014 and right at the beginning of my last year I knew I wanted to make an animation about the boy and his shadow. I was inspired by a short story that I had found once in a collection of short stories, but it is not too important, because ultimately I moved away from the story, and the only thing left was the shadow as a character. Also since the beginning of my studies, I have been very impressed with the animated feature Mind Game in terms of both visuals and storytelling. So inspired by the idea of making a shadow as a character and narrative style of Mind Game I was digging deeper and deeper in the subject. 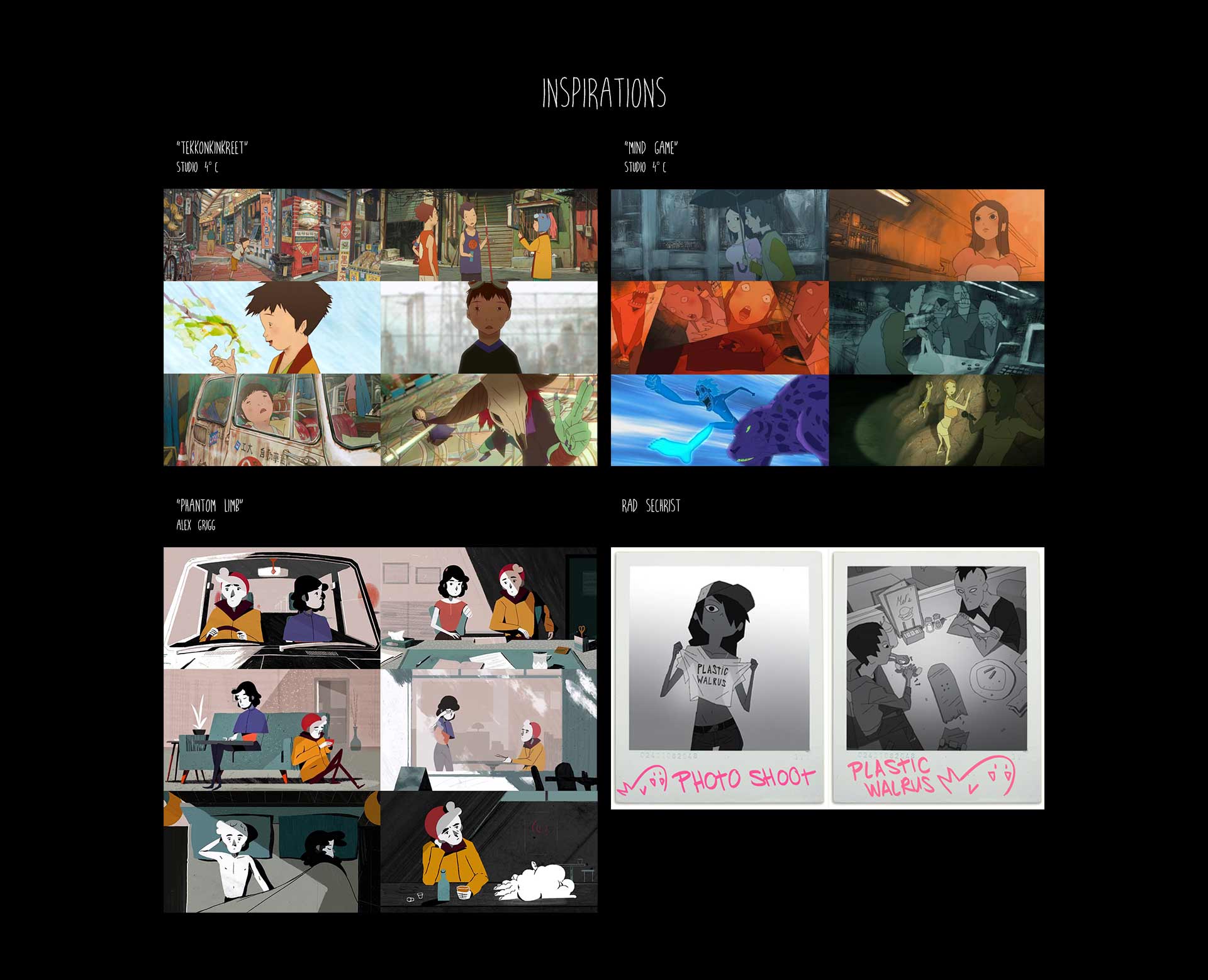 Having said that, I treated the shadow as a mysterious reflection that hides our unconscious mind. Everyone has that part of their personality but not everyone explores it. A lonely person is the one who is closer to that matter, while at the same time this lonely person is the one who wants to get out from the loneliness. I had some experiences with doubting myself in terms of social life, but from the perspective of time I can tell that I was the only obstacle that I had, and for the most time it was all because I had fallen into a circle of doubts. I’m pretty sure that everyone has experienced something similar even in small portions, even though it sounds a little depressing if you think about that.

Our protagonist was lonely way too long and touched his unconscious self, he turned his needs to the inside.

Here I’ve made the Shadow seem at first to be a friend – the only friend – of our protagonist. It may seems to be harmonious to befriend your shadow but from a proper perspective it may look more like a disorder than harmony, and so it is here. Our protagonist was lonely way too long and touched his unconscious self, he turned his needs to the inside. It this case only a small glimpse of the idea of personal interaction was a trigger for the inner fight where the Shadow was already way too powerful for a boy to win the fight.

The monotone world your protagonist inhabits feels like the perfect environment in which to explore the film’s themes, how did you develop the grayscale, handmade style of But she’s nice…?

One of the characters is the Shadow and because of that I was kinda forced to restrict myself to black and white. I also tried to achieve the effect of slightly overexposed film, to emphasize even more the presence of the Shadow. In the final result we can barely see what is in the light (sometimes we can’t see anything) so we turn to shadows where the details are present. Another reason for using grayscale is that it’s sometime used as a synonym of boredom, so it seems a perfect fit for presenting the monotony that the boy is experiencing.

I’m a guy who loves old things, things that have soul and roots, so my love of handmade animation is obvious. Although I made But she’s nice… on my computer – because it was the fastest way – at the same time I was trying to use as organic looking tools as possible and then enhance it with some effects. I added a previously prepared loop of paper texture (which also caused slight flickering), at the top (of course) I added a layer of grain. Grain is like an instant quality. My goal was to enrich the flat surface and make the whole thing look as it was handmade.

You divided the film into 6 production sections during creation. What was the practical purpose of working in these distinct segments and how did the overall production progress?

I divided the animation in 6 parts/chapters, in order to reduce the burden of computer data processing. This division into 6 sections also follows the plot. In terms of production, first I sorted out the storyboard and I could get started with the background and animation. While the work on the backgrounds was relatively easy, animation was a fight for life. Generally, from a certain point I had 1 day to make 1 shot – by that I mean animating and coloring it(!), regardless of its length. That’s the brief story.

Now let’s dig into details of the animation process! Some time ago Alex Grigg made a tutorial on animating in Photoshop. Until that time I animated, either on paper or in TVPaint but I never got used to this program, so I was glad to find out, that the program I feel comfortable to work with (Photoshop) can also be used for animation. An additional advantage of using Photoshop is that I don’t have to render any frames of animation in order to put them together in After Effects. I just need to import the PS file to After Effects and it’s ready to go. I can apply effects, and freely edit them in any given time, which in PS means merging them with the layer forever. With this combination of programs I have the flexibility with no risk of worsening the quality from rendering frames and I do not need to catalog all the frames and layers of animation in folders.

So all files with shots of the parts were placed in the AE where I composited them and added predetermined effects, then I rendered out the whole part/chapter as a sequence of PNGs, and when I finished all the parts, I threw all the images into one AE file, where I added music and some more effects. After 7hrs of rendering (!) the animation was ready! Since then I’ve been constantly using this combination of PS and AE.

Do you feel that the tight timeframe you had to adhere to for But she’s nice… had an impact on the form and narrative of the film? Given a more generous schedule what changes would you have made?

The most important part for me was the story, I worked hard on it – which partly caused the shot per day situation. The whole process was very exhausting for me. I would work all day, often not leave the house for a few days in a row, as a result of which I would get worse many times. But if I had stopped even for a few days, I wouldn’t have been able to complete my work on time. To tell the truth, I do not know how I did it.

If I had more time I would make animation smoother and generally better looking. Also I would take some rest, but leaving hardships behind, working on But she’s nice… really taught me a lot in many areas…and showed how little I knew, so no regrets I guess. I want to emphasize that I’m talking only in terms of that specific time in my life, now I would made it in a whole different way.

There’s a lightness to Damian Czajka’s score which accentuates the sound design and dramatic shifts of tone. What references and conversations did you share with him to build the audio aspects of the animation?

I agree with what you said about Damian’s music. But to tell the truth, at the time I had no idea about how to use music at all – the tight schedule was a big factor here. After a few emails and a phone call I decided to trust Damian. Here’s what Damian said about that – “There was no clear vision at the beginning, we agreed that I will try to deliver a delicate – but at the same time clear – message. It was kind of an experiment where I was trying to translate what Tomek did visually into the language of sounds. There were some feelings I wanted to be enhanced. I feel that in the end music tells us a parallel story on its own, which enriches But she’s nice… as a whole.”

The internet is a powerful tool to connect, especially in the creative field.

Funny thing, I met Damian for the first time one year after finishing But she’s nice…. It was at the festival where But she’s nice… was in competition. Even though we had never met before, we recognized each other from a distance and then spent some time talking like old friends. The internet is a powerful tool to connect, especially in the creative field.

How well do you feel the Facebook event worked as a promotional vehicle for the But she’s nice… online premiere?

I was counting that it would pay out better than it actually did, but at the same time I’ve done what I could, so I can’t complain I just need to continue to grow my reach in social media. In terms of promotional vehicle the premiere event at Facebook was perfect, without it I wouldn’t of been able to let the people know about it. I’ve made one online premiere before for my animation Whaddup Fish! because of that I had some experience in this matter, so this time it was easier in some aspects.

What can you tell us about your next film The Firefly Grove?

The Firefly Grove will be my directorial debut and at the same time it will be my master degree – if I will make it on time. I received a scholarship for this animation from ASIFA-Hollywood’s Animation Educators Forum and then with my Producer Ewelina Gordziejuk (we met as a result of But she’s nice… screening at festivals) from EgoFilm we got funds from Polish Film Institute. For the very first time I have a small crew to help me up, they are very talented and I’m sure that we will top all my previous animations easily. In this animation I’m going to focus more on emotions. I can tell you that the main characters are siblings on holiday in the countryside but for more information you need to wait. What’s more, with my producer we have a special project waiting in the line, but I won’t tell more… maybe expect that if we fulfill our plan there will be some interesting buzz around the project.