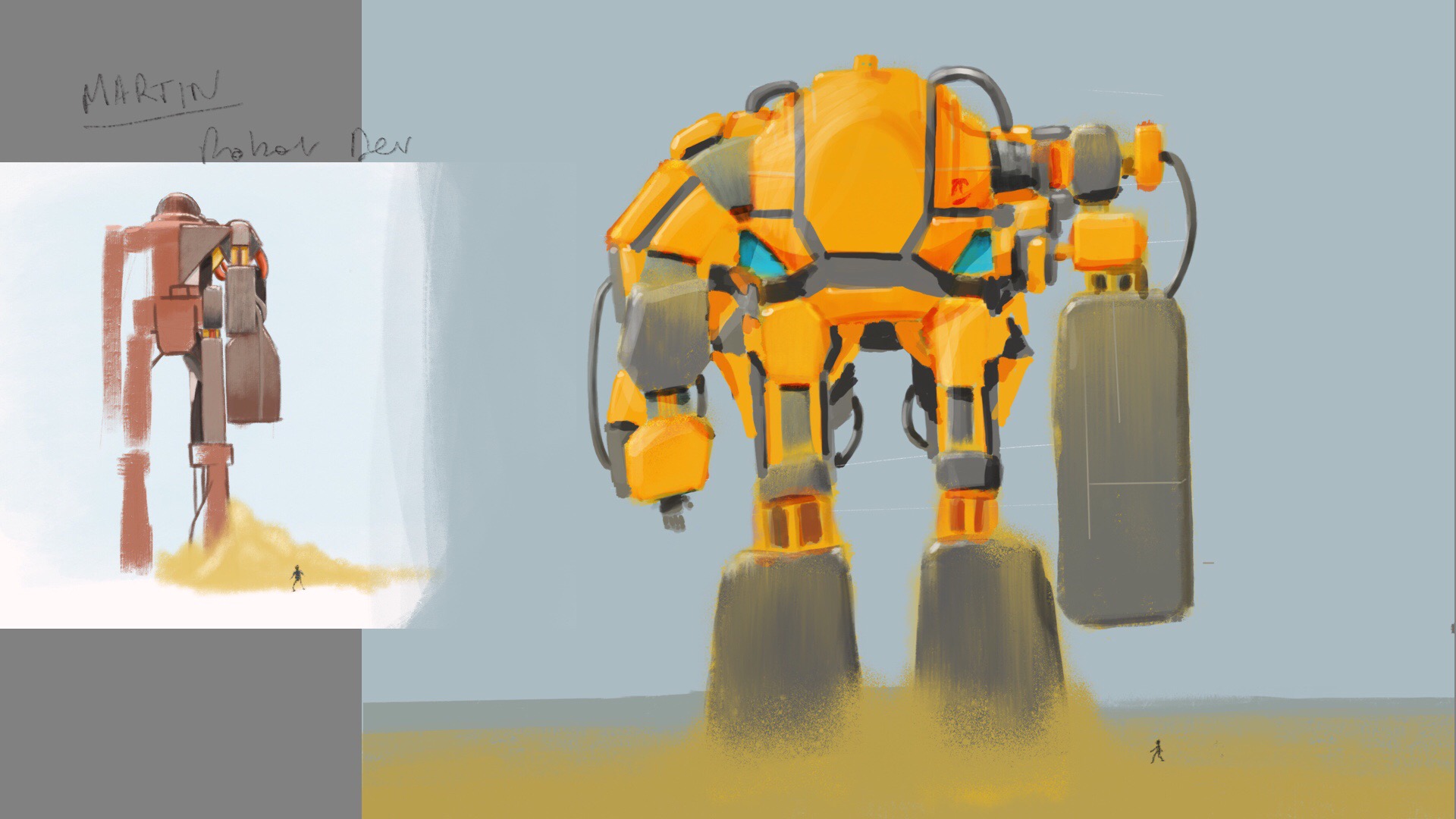 English coastal towns often have a reputation as tourist attractions and retirement hotspots, but it’s not often we think of them as being the centre of an event set to change the world – but animator Sholto Crow is out to change this perception. Unleashing his animation Martin online recently, he hopes to show his once hometown “in a light it isn’t normally cast in” by setting is as ground zero for the Armageddon. Using a blend of traditional and contemporary animation techniques to tell his tale, Crow has created a film which is stylish, fun and memorable. The animator joins us on Directors Notes to discuss destroying the place he grew-up and his one-man band approach to production.

Cromer became your home town in your early teens, what made you want to create a film where it gets totally obliterated?

The obliteration was more a sad but unavoidable result of the narrative, rather than anything specifically directed at Cromer. Having said that, my art teacher at Cromer High School failed me for art GCSE (too many pictures of Jimi Hendrix and not enough of Cromer Lighthouse) so subconsciously maybe I’m settling an old score…

I grew-up in Luton and if I had to make a film about it getting destroyed, I’d struggle to narrow down the locations I included! How did you go about choosing the landmarks and setting you wanted to feature?

I actually got a taxi from Luton to Cromer once. Long story! (and long journey). Cromer is really a beautiful, classic seaside town, much nicer than its fierce rival, Sheringham. So any location is pretty, more or less. But there is some significance – the cinema street he walks down at the beginning has the old cinema on it (not the current one), the Regal. I have fond memories of seeing Terminator 2 there and I took my little sister to see The Lion King there dozens of times so it has a special place in my heart and those are the posters on the wall. The house he runs past at the end is my old house. I used to drink cider on the promenade with friends as a teenager (and fell off the roof of the beach huts once), so those areas are in there. For the beach shots it was a case of being there and plotting it out like a film really. The pier is picturesque so as long as it’s in there it looks nice. Luton airport would be a good apocalypse location – people could take refuge there maybe? Try and fly out in an old biplane…

Stylistically, the film blends several animation techniques with the backgrounds having a real traditional “postcard” feel and then the robots feeling much more modern with the use of 3d. What influenced the aesthetic choices when making Martin?

The postcard aspect was definitely an important factor as that’s kind of what Cromer is all about (although the reality is obviously different). I love work which is hand-made and organic but I also love it when you can’t work out how the hell something was done. So the blend of 3D and 2D was partly a practical consideration in terms of actually positioning and animating objects which would be really tricky to do otherwise, but also it is slightly surprising seeing something like that in a film like this (I hope). Robots are by their nature ‘futuristic’ so it made sense to use the technology. And I wanted them to have glowing blue lights to pop out and jar a bit too, so that was another reason. I don’t really like slick 3D and shiny stuff much and I also wanted it all to feel like it had history. In my head, the robots have been buried there for thousands of years. Cromer has a long history. The sketchy and painterly look reflects this somehow. It also gave me some leeway as doing it myself I had to cut many, many corners. Using a sketchy and rough style obscures some of that.

You were pretty much a one-man band on production, even producing the music yourself – can you tell us a little bit about the process? How long did it take, what tools did you use?

It took just over a year to make but I wrote it years ago with a friend, Ian Poynton. We used to write a lot of sketches together and filmed some with the BBC at one stage. Ian and I had actually shot some pretty rough footage some years ago which I dug out and used for wild track and for reference of some of the shots. I have recently moved to Sussex from London with my family, and I have a studio shed in the garden. When I am working in London I have a couple of hours on the train – I made most of the backgrounds on my iPad Pro using Procreate, on the 08.09. I made an animatic and built it really slowly in down-time when I wasn’t working, only during the week, in the shed. Depending on the type of shot I would rough it out in Photoshop or Adobe Animate and build the edit that way. Gradually I closed all the gaps. I had to give myself a deadline and commit to that after a certain stage because I wanted to finish it.

As a result there are one or two (or twenty) little elements I still watch through my fingers. But it was more important for me to actually finish it than to make it perfect. I made the music in Logic. Again, I started it on the train and moved it to the shed. I have always made music (one commercial release, 10 inch vinyl, sold all 800 copies, remixed by Metalheadz before the record label went bust!) and I have played the guitar since I was 12 so that part of it was very quick an natural. It had to be orchestral to fit the story. A lot of animation currently uses minimal electronic sounds and I wanted mine to feel very different from everything else. I love brass and wind instruments. The flutes and oboes give the beach scenes a false sense of gaiety and then the brass and timpani have an almost physical, dark presence when the robot appears.

Am I right in thinking you didn’t enter Martin into festivals – if so, what made you decide to release the film directly online?

I released Martin online mainly because I didn’t expect it to have the impact it has had. I made it to tell a story I thought was funny and worth telling, but also to push myself and develop as a storyteller and an animator. I wasn’t sure if it would be a story anyone else would want to hear. As it’s well exceeded my expectations with the warm reaction it’s had I will be entering it into some festivals.

It’s going to be another short animation which is stylistically/visually quite different but still quite silly. Also hopefully quite cinematic. I am lucky in that my medium is very versatile – you can pretty much tell any story you want – and a lot of the ideas I have are far-fetched but often grounded in reality. I want to work a bit with light and scale, and a slightly different look. But the overall feel won’t be that far from Martin.