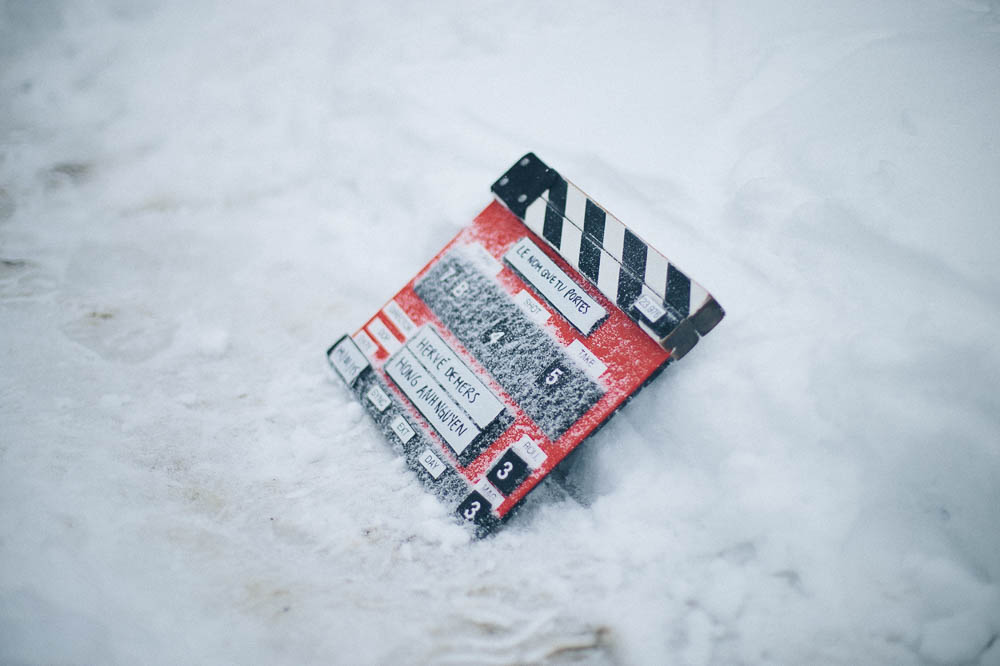 Hervé Demers is a filmmaker I’ve been lucky enough to be in contact with for a couple of years now. From the moment I experienced the subtle, yet powerful storytelling of his 2013 short Les adieux de la Grise, I felt instant admiration for his craft and a true emotional resonance to his storytelling. From speaking to him over this time, his passion for his work and his meticulous approach to filmmaking is clear to see, but it’s this emotional reaction to his narratives that keeps me coming back for more.

Once again his latest film, Le nom que tu portes (The Name You Carry), features a restrained piece of storytelling with some complex themes running through it. The story of a father and son spending some time together after the boy is suspended from school for a seemingly unprovoked violent act, this is a short orbiting around themes of identity, immigration and parenthood – there’s something in there we all should be able to relate to. Eager to dissect his latest film and discover what his filmmaking future holds, Hervé joins us to discuss the inspiration and perspiration behind The Name You Carry.

I know from talking to you for my Short of the Week article that the story behind your film was largely influenced by your lead actors. What made you want to tell this story on screen?

The initial idea was to create a father and son story inspired by the experiences writer Jean-Philippe Boudreau and I shared with our own fathers. We wanted to examine more precisely the feelings and thoughts that underlay every fatherly relationship, but that are not always voiced or communicated.

Right from the start, we knew actor Sasha Samar and his son Vlace Samar from their work in the theatre. They were talented friends with whom we’ve wanted to work for a long time. From the story perspective, their presence also represented an opportunity to add another layer of complexity by exploring the notions of cultural heritage within the context of immigration. The project was thus written and developed with them in mind, evolving around both the actors’ own story and our most intimate fatherly experiences.

Do you think their closeness to the story added anything extra to their performance?

I am convinced that it did. For me, cinema is always at its best when it is in constant interaction with elements of reality. I always try to find the right balance between the concepts I have in mind and the ineluctable fact that we have to bring these abstract notions to the physical world; in real landscapes, with real beings and feelings.

I wanted the audience to feel something in their eyes that came from the love they really share for each other.

Thus, if the story of The Name You Carry is entirely fictional and primarily motivated by intimate experiences, it had to ultimately be embodied by Sasha and Vlace on screen. So in the process of writing this story, we met many times with Sasha and Vlace. Our intentions were to include elements of their own lives as much as we could within the fictional story – most of all their real names and memories of Ukraine – so that it would resonate interiorly for them on set. I wanted the audience to feel something in their eyes that came from the love they really share for each other, something that really came from within.

I think this real life influence gives your film some extra weight and intimacy, but with so many films about immigration currently being made, what do you think makes yours so different and what do you hope a viewer takes away from watching it?

The films I’ve seen recently about immigration were mainly centred on the quest for safety and security; they followed characters that were fleeing from a country in a state of war or facing the many difficulties involved in starting a new life abroad. I was more interested in what comes after all that, with the second generation of immigrants. For instance, I wanted to explore how the second generation of immigrants can possibly be in continuity with the aspirations of the first generation, when it is born in a totally new cultural context, with new social codes, languages and values. These internal conflicts occurring within generations are really what interested me and I wanted to make a poem about it.

One of the things I love about your filmmaking and storytelling is how you take such seemingly personal and individual stories and make them feel so universal and relatable, how important is it that an audience connects with your work on an emotional and personal level?

Connecting with the audience is the reason why I go to work every day. When The Name You Carry premiered at Clermont-Ferrand in 2016, I experienced something that provoked a significant shift in the way I envision my work, especially in regard to its relation with the audience. For the first time in my early career, a film I had directed and edited myself was simultaneously being experienced by 1500 souls in the same room. There was something almost sacred about the experience: a shared presence of contemplation and openness. You could feel in the air a strong emotional response with the most intimate elements of the story.

This is what I am aiming for now. Simplicity and absolute precision in service of an accessible form: the story.

My early shorts were closer to the narrative logic of poetry and the lyricism of painting. They were made with very little means and crafted with a lot of care and patience. In the end though, I guess they spoke to fewer individuals because they were less story-driven. The Name You Carry was definitely a turning point, formally speaking because it was by far my most conventional film, but also, I believe, my most precise and mature in terms of directing. All the things I wanted to express were carefully concealed within the story, unostentatious, carried by the film’s simple form, and it’s almost as if my work as a director finally became invisible. This is what I am aiming for now. Simplicity and absolute precision in service of an accessible form: the story.

The Name You Carry was a real step-up in production in terms of cast and crew, how did this factor affect your approach to the film and your directorial style?

The only drawback with a big crew and a big budget is the lack of time. Everything has to be planned in advance to maximize time, which leaves very little room for exploration on set. For this film, I had the chance to have very talented actors with whom I had rehearsed methodically, so the shooting ended up cruising at a pace I had never experienced before with unprofessional actors.

That said, from a creative standpoint, a big professional crew is really a privilege. If you are humble enough to listen, your teammates will constantly improve the project by suggesting ideas and finding solutions derived from their production experiences. I’ve also witnessed the power of our team in terms of sheer workforce: the control they bring you, as a filmmaker, to shape the physical world closer to your intentions. One morning, for example, we arrived on set at 5:30AM to film the college exteriors at sunrise. We had scouted the location a week before, but since then the college had built huge metal structures to protect the entrances from ice falls during winter, thus ruining the noble aspect of the building we needed for the story. I was worried and upset. Then three guys came to me from the production design crew and said they could dismantle everything in less than 15 minutes. They proceeded to climb on top of the structures with unparalleled athletic skills, solving the problem instantly in a way a smaller crew could never have done.

In the end, my wish is to be able to work in both production contexts: with bigger and smaller budgets. The freedom I enjoyed while making Les adieux de la Grise with very little means was unparalleled. We filmed animals for hours, waited for kids to be in the right mood, playing with them in the meantime. If we could not rely on the efficiency and creative potential of a big professional crew, we still had the most valuable thing filmmakers can dream of – time.

There’s an interesting piece of repetition in the film in two scenes where father and son pass a box to each other, what can you tell us about the symbolism of these two scenes?

When I plan a shot list, I am always struggling to find visual ways to expand the symbolic qualities of the writing. I tend to rely on the use of space and subtle visual motifs – such as camera angles, focal lengths, movements and repetitions – to bring another level of depth to the narrative. Most of all, I try to do so as indiscernibly as possible so it does not overshadow the actors or the story.

The repetitive gesture you are referring to happen first in the Ukrainian winter sequence and then at the very end of the film. In the initial screenplay, we had this idea of repeating the gesture of a father carrying a box to his son, like a haiku motif: evoking the unbounded mystery of what is being repeated throughout generations, of what subsists within us regardless of space and time. I was always very fond of the way Japanese poets create these ‘aesthetic moments’ through sensitive observations of the trivial. This elusive repetition appeared to me as the perfect foundation of a short film structure.

I am also aware this repetitive gesture may not appear as obvious to everyone, but it is also emphasized, formally speaking, by the fact that it is the only moment in the film where you can see the lead actors present together in the same shot. Other than that, they are always separated, either by the frame, the edit or by a piece of glass, never truly looking at each other. In the end, they do not say a word, but their eyes – underlined by the repetitive nature of Sasha’s gesture – materialize and express their unspoken love and understanding.

I am currently developing two distinct projects around a small mining town in rural Quebec, built around a 2km open-pit mine. The first project is a short experimental documentary – part of my master’s thesis – where I will be exploring the representation of collective memory in film without relying on archive images and sounds. The shooting of this short piece already started last winter. The second project inspired by the same mining town is a feature film screenplay – a comedy-drama – which I’ve been working on with my usual writing partner for a year now. We are aiming at 2019 for production.