It seems obvious to point out that the connection between pop music and place is powerful, resonant and iconic. The Beatles and Liverpool, The Smiths and Manchester, The Doors and Los Angeles, Nas and Queens, Pulp and Sheffield. It seems obvious but despite many music documentaries about music icons, it’s only recently that films about bands and artists have been investigating the connections between the music and the milieu that spawned it.

The last two artists on the list above, Nas and Pulp (in Florian Habicht’s Film about Life, Death & Supermarkets), are both examples of the welcome recent trend to explicitly explore in cinematic form the connections between place and pop. You can now add the wonderful Elephant Days to this burgeoning list. The film, directed by James Caddick and James Cronin is essentially about the wonderful British band The Maccabees and the creation of their final studio album before they split up. However, it’s also about so much more, specifically the people and environment of the band’s adopted home, Elephant & Castle in London, hence the film’s title.

The film is a superb document of the creative process and a wonderful eulogy for the band but thanks to a keen and committed heart it is also a loving portrait of a community on the edge of disappearing as the sadly inevitable gentrification encroaches. Ah, progress, always for the best right?

The film is out now, having been given a low-key release in late October by the band’s former label Fiction, who commissioned the film. It’s a shame it’s not been shouted about more, but then it’s kind of fitting for a band that always let its music do the talking. To commemorate the release however, I caught up with Director James Caddick and from the band, Orlando Weeks, for an interview about the making of this beautiful film.

The film is produced by Fiction Records, your old label. Is this a project you took to them or did they ask for a more traditional music documentary and you took this to them?

Orlando Weeks: We took it to them. We wanted to make something that would run alongside the album. The original plan was not to involve us (the band) and focus more on the surrounding area. But for the label to get on board they wanted us in the film.

How did the project come about and evolve, and how long did it take? Was the scope of the film there from the outset or did it emerge?

James Caddick: I had made a couple of music videos for the band and we had always discussed making something longer. The guys were recording their third album in their studio in Elephant and Castle and invited me along for a chat about doing something about the area. They thought the culture and community was really inspiring. They also didn’t want to be the focus of the doc. They wanted to be a part of it but not centre stage. I had always lived in South London and loved the area they were recording in although didn’t know it that well. My key image of it was a shop that I used to go past on the bus called Mike Leigh’s discounted clothes, it had a permanent ‘Sale’ neon light.

Why has it taken so long to be officially released?

JC: Argh!! Well there was nearly a release by Studio Canal with a live cinema stream and various ways to download and buy the film but it was cancelled when the split happened. I also think that perhaps it was a tricky one to sell.

OW: I had always wanted the film and the record to come out simultaneously. That for me had always been the point. Each would help strengthen the cause of the other. But I think, as we got closer to release the label wanted to focus their attention on the record’s release. 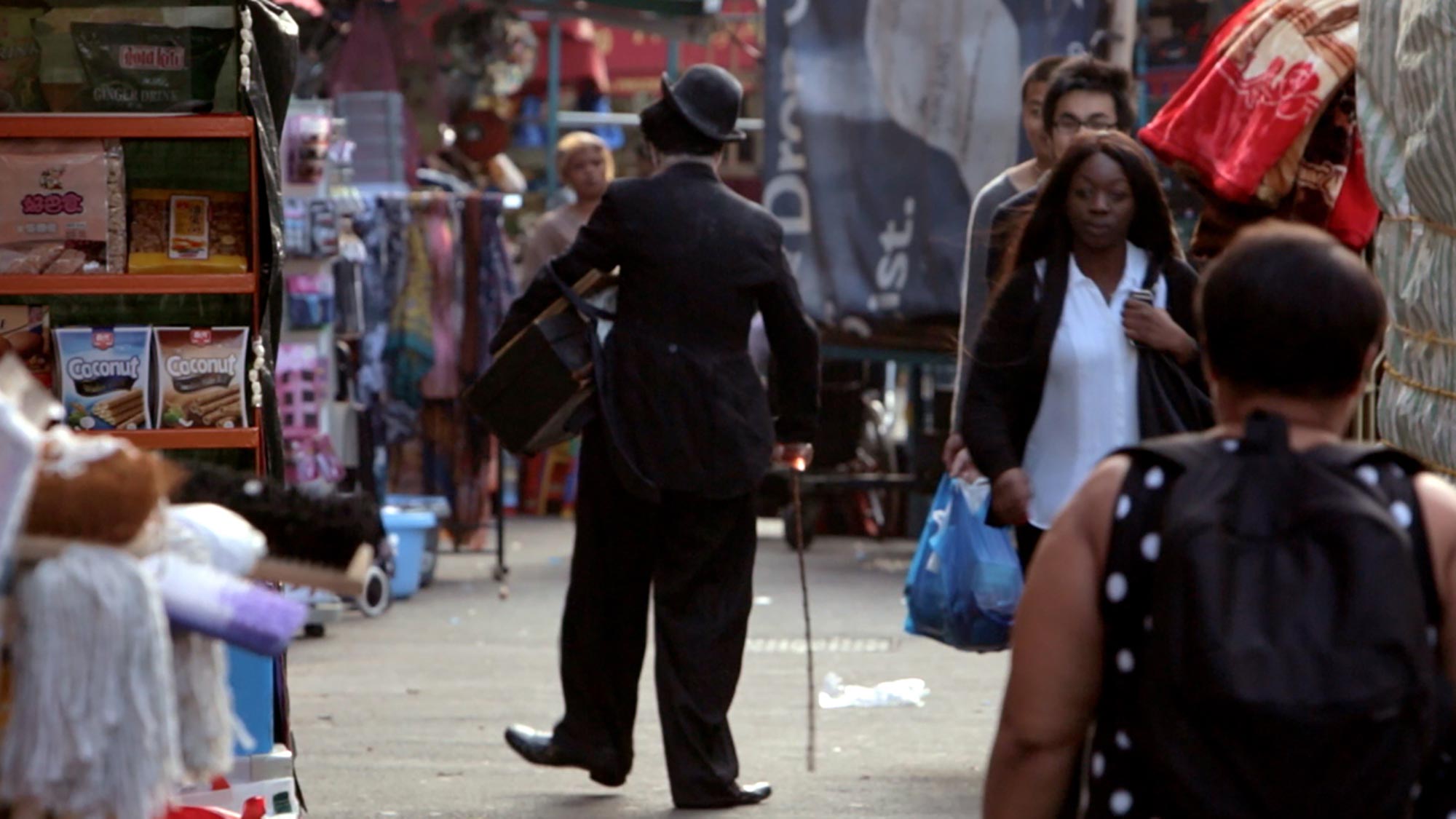 Has the film changed or was there a desire/pressure to change it, once you decided to call it a day as a band?

OW: The film hasn’t changed. I think the film does a good job of documenting how we were when we were making Marks To Prove It; the initial excitement – the realisation that there was a mountain to climb – the slow onset of frustration and then the gradual lifting of the mist. The end of the film has such a sense of release. We’re out of the studio and celebrating our efforts by playing the songs that we’d been wrestling with, exorcising them.

One of the great achievements of the film is that it shows the effort and sacrifice required to make something “good”.

It’s quoted in a lot of features and reviews around the release of Marks To Prove It that it was a difficult album to record. The film hides a lot of what those difficulties must have been on a day-to-day basis (though there are hints), unlike say the Wilco film I’m Trying To Break Your Heart. What kind of impact did seeing the final film and having it made while undergoing such a difficult creative process have on you as a band and as individuals?

OW: We entirely trusted James and James and as a result it was nice to have some other folk in our midst. It was a difficult process, we felt stuck and were putting ourselves under huge pressure to make something that we deemed good enough. But for me, one of the great achievements of the film is that it shows the effort and sacrifice required to make something “good”. I think that sense of commitment and grind is there in all the stories.

Apart from the Wilco film, Elephant Days reminds me of a number of other recent music films and documentaries. What are your favourite music films and were there any particular ones in mind as you were creating this film?

JC: Well I haven’t seen the Wilco film but I will! The big influence was a film by Gideon Koppel called Sleep Furiously. Not a music film but an offbeat portrait about a Welsh community. The Beatles’ Let It Be Doc and the short films for PJ Harvey’s Let England Shake album by Seamus Murphy were also bandied about.

The film is fascinating in terms of the creative process, was that something you were keen to explore when you started the film?

JC: Yes, thank you, we started the film exploring stories that interested us, we had probably 3 times the stories that made the final cut. It was an intuitive process that got clearer as we filmed and edited. It’s likely that’s not ideal but it was a wonderful battle to discover the linking threads and it doesn’t always gel. I think as filmmakers we were tied up in the creative battle to find a way to make things work so there’s an element of our struggle that we [also] saw in [the] others. The Maccabees are a great bunch of people that love what they do and I feel that sort of spread out into the stories we found.

Was it important to find a filmmaker with an affinity for those things?

OW: We asked James because we felt like he made interesting and compassionate stuff. The video he had made us for Can You Give It was tender and funny and insightful. We thought that if we were going to be sending someone out into our area, to some degree at our behest, then we wanted someone that we knew would respect the situation. James does that and I think that is why he got such interesting stories out of the E&C.

It’s not in your face, it’s respectful and perhaps that’s why it manages to be both subtle and telling. James and James were rolling with the punches in the same way that we were and that many of the other stories were. It’s a film that documents people minding about what they’re making, being made by people that minded about what they were making. Not sure if that makes sense. But I think I mean that we were all in it together.

It’s not in your face, it’s respectful and perhaps that’s why it manages to be both subtle and telling.

Did you relish making a ‘music documentary’ that was so resolutely about community and music in community in all its myriad forms?

JC: I relished the opportunity and creative freedom the band gave us. The music was a key part, but sport, and gardening, and making in its many forms was what it was all about. Music is such an emotive tonal thing and I felt very privileged to be able to spend time with the band and also with Natty Bo and the church. When they gathered for prayers at the church it would send shivers down my spine, it was very beautiful. When you make something like this you wonder if you have missed bits and key aspects to the stories or given enough time and depth to an individual subject. I think ultimately in some ways the films worked better as stand alone shorts. That’s how we managed the project by making six 20 minute edits made up of two minute scenes then mixed it together at the end.

The film has something really valuable and timely to say but does so without being overtly political or didactic. What do you hope the legacy of the film is?

JC: I like the idea that it’s a record of a time, a place that has changed. I always liked the idea that South London has a film that shows a kind of spirit that I always loved about the place. Although I’m not sure that’s entirely achieved. My fear is that it will sit in a box or vault and disappear, and that’s quite likely but maybe the legacy was the process of making it and meeting the people. I think really ultimately the films legacy is tied up more with the legacy of The Maccabees and the people who loved them.

OW: I thought that it would be a film about E&C and actually I think it’s a film about what it is to be proud of what you make or who you are. And as interesting as E&C is, I think those themes are more interesting. For that reason I hope that the film gets to be seen by more people than Maccabee fans alone, but also because James deserves for more people to see it. It is a wonderful piece of work and he is a fantastic, dextrous filmmaker.