We talk a lot about the importance of narrative here at Directors Notes, but one of the things we often gloss over is the value of performance. You can have a great story, full of well-rounded characters and engaging scenarios, but if your actors don’t make it all feel believable, then the effectiveness of your film will be severely compromised. Director Alan Friel knew this was the case with his short Cake.

A deceptively simple film about a mysterious duo wandering a barren wasteland with a gun, Cake is a film full of mystery, but its success lays largely in the hands of the actors playing his protagonist pair. Director Friel joins us to discuss casting Maxine Peake (Black Mirror) and Letitia Wright (Black Panther) in his lead roles and the importance of location.

How did the story for Cake originate and what made you want to turn it into a short film?

I wanted to make another short film but didn’t want to write it so I put a call out for a script through the Rocliffe Writers Forum that is run by Farah Abushwesha who Produced Cake. Myself and Farah had wanted to work together for a long time and thought a short would be an ideal way to start. A couple of great scripts came in but when Andreas Hadjivassiliou sent Cake to me I was really taken with his amazing dialogue and dark humour.

When I read it I immediately thought of Waiting for Godot. These women talk about everything and nothing, so much is said without words and it’s a film where the ‘how’ doesn’t matter because the dialogue and performances anchors you very much in the present and draws you in. Andreas is a real talent.

The synopsis describes the film as “Two women sit in a barren dystopian wasteland discussing the best way to die” but one of the things I love about Cake is there so much more going on than this. The film leaves you with so many questions – where did they come from? What’s their relationship? How important was this feeling of backstory and intrigue when telling this story?

I love the fact that there are many questions left open and that this builds intrigue for the viewer. I thought that by not knowing their backstory there is a universality to them and that the audience could put themselves into their shoes easier. I hate films where you feel shortchanged, so I hope we got the balance right, it’s all about the relationship between these two women and it doesn’t really matter where they came from.

The script originally had them in rags but I put them in worn Tuxedos to make it more of an interesting backstory because it instantly makes the audience ask where they came from and draws them in to try and get some clues.

It gives the film a great style and along with the widescreen format and old anamorphic lenses that we used, it creates an emptiness to the landscape.

The film is propelled by two fantastic performances from Maxine Peake & Letitia Wright, how important was it for the film that you got actresses of this calibre involved and what do you think they bring to the film?

Casting Maxine and Letitia was so important. Because this is a story that weaves subtle humour around a desperate situation I knew I needed strong actors to do it justice. They both bring their own strength to the film but work so well together. There is a maturity to each of their work and I’m so grateful to them for taking the time to do this little film.

Alongside the compelling narrative, Cake is a film with a striking aesthetic, can tell you us a little about the production (crew, equipment, etc.) and why you decided the film should be black and white?

We shot the film with a very small crew over eight hours in Dungeness, Kent. It was very quick because it was October and we didn’t have that much daylight.

I have always loved black and white as an aesthetic and after taking some location photographs and bringing them into photoshop I tried a couple of different looks but black and white seemed to fit. Robbie Ryan was our DOP and we discussed the look of the film and agreed that black and white was the way to go because it gives the film a great style and along with the widescreen format and old anamorphic lenses that we used, it creates an emptiness to the landscape.

We shot on the Alexa and used mostly natural light.

As you’ve mentioned Cake was shot at Dungeness, why did you choose that location and how important do you feel its role is in the film?

The location was very important. Dungeness has the barren feeling we needed from the location but it’s actually quite the holiday spot. We took out a lot of houses in post from the background because the beach we shot on is a busy one, people were walking their dogs around us while we were working. I think the location, like the tuxedos visually tell the audience everything they need to know without any exposition.

The barren location tells them they are stranded in the middle of nowhere and have reached the end of the tracks.

Where the tux’s tell the audience these women came from somewhere affluent the barren location tells them they are stranded in the middle of nowhere and have reached the end of the tracks. Steve my designer brought in the sign but the tracks and hut were already there. Ready made art dept – perfect for a short film. 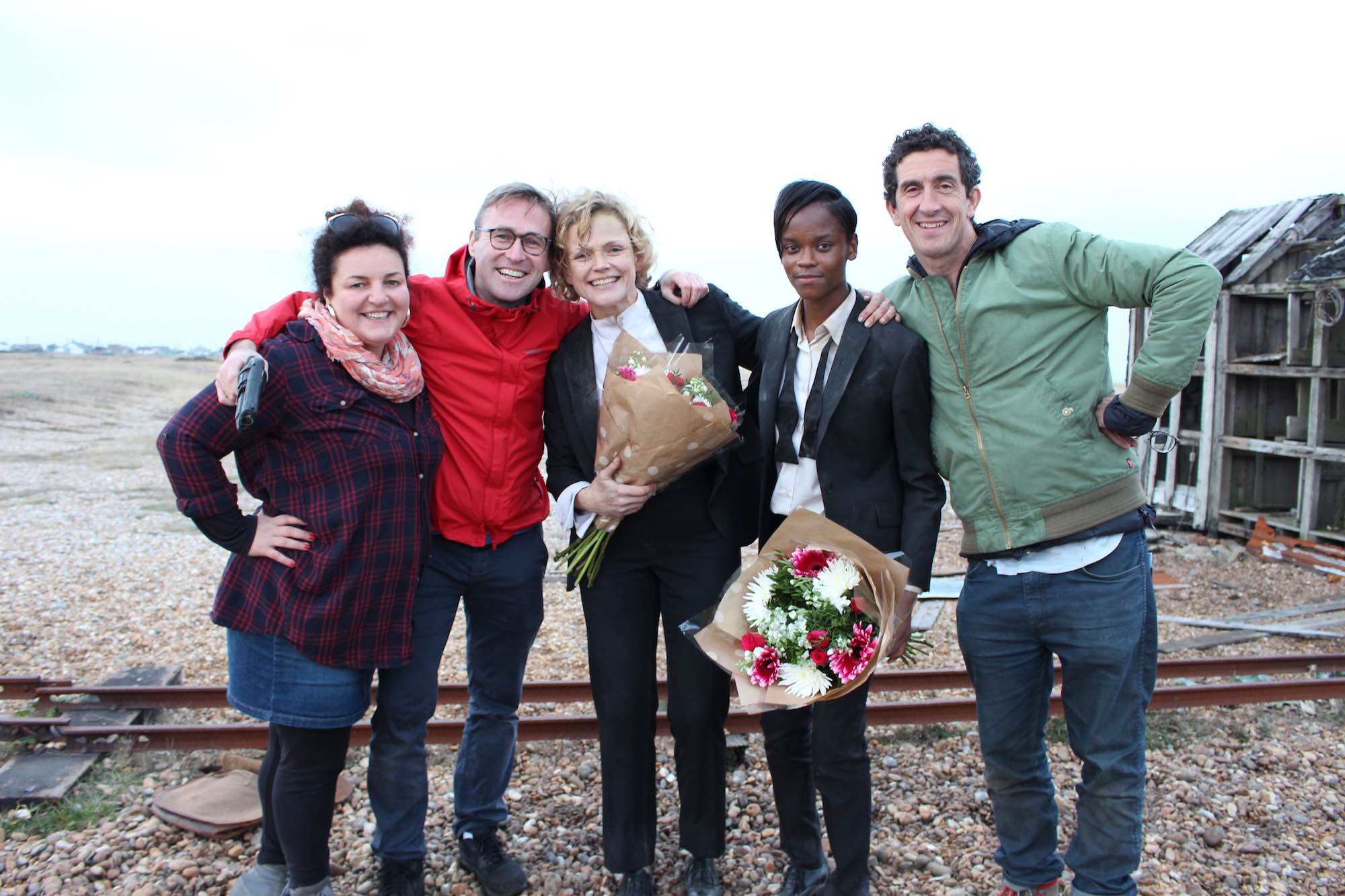 What have you been working on since you complete Cake?

Myself, Farah and Andreas have been working on a feature script that has just received development funding from the Irish Film Board and I have another feature in development with Fantastic Films in Dublin that I am very excited about. Both films are set in the future and are stories about mothers – it would seem I have some mother issues!!