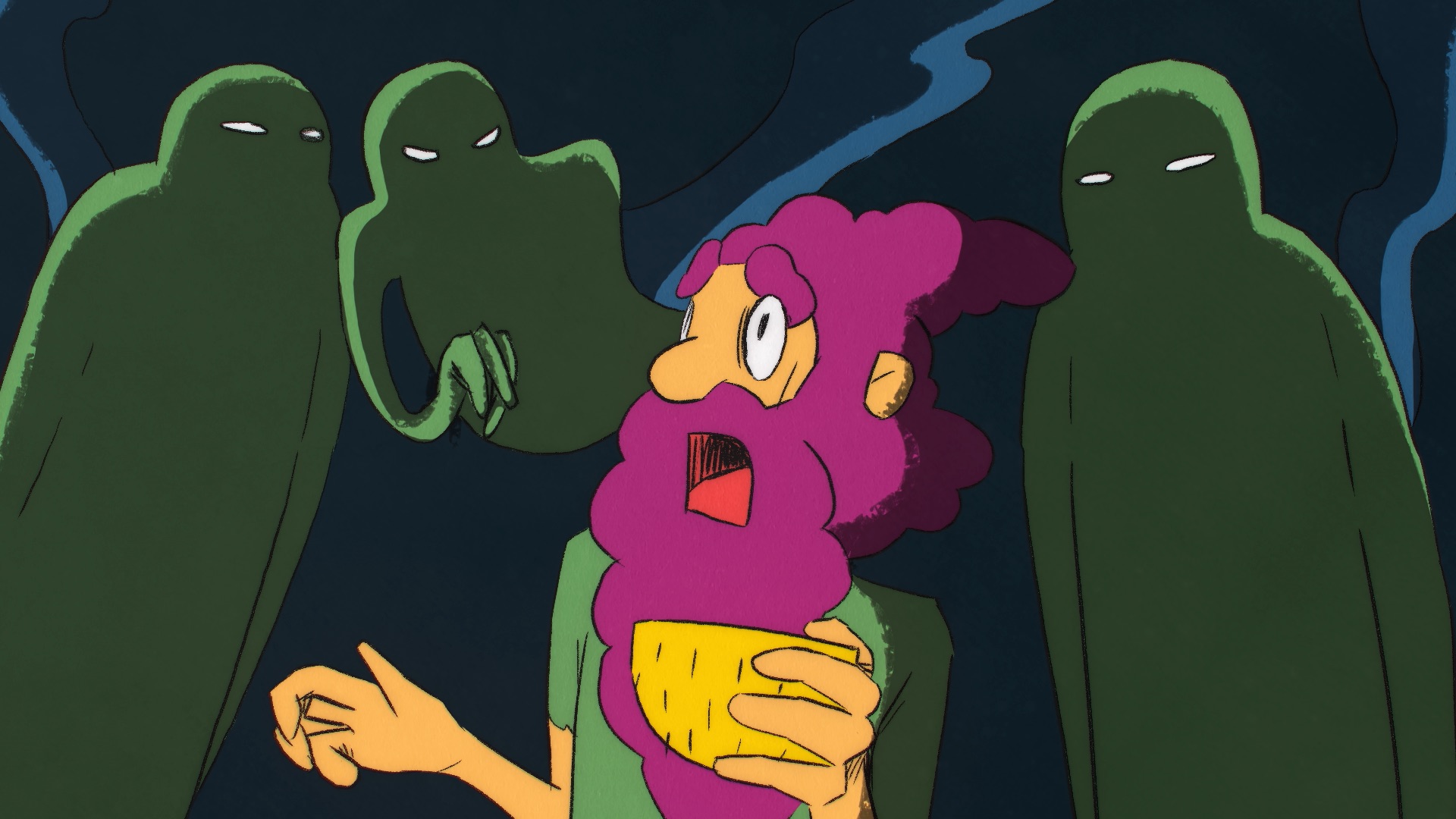 Welcoming filmmakers back to the site is one of the highlights of what we do here at Directors Notes. Especially when it’s a filmmaker making a triumphant return, with a brand new short fresh off the festival circuit. It’s been over four years since we invited Winnie Cheung to introduce her time-travel short Dear Lucas to our audience, but today the Brooklyn-based filmmaker returns with her new animated documentary Albatross Soup – a psychedelic short based on ‘an entertaining yet disturbing lateral thinking puzzle’. Fresh from playing Sundance and GLAS festivals earlier in 2019, Cheung joins us to discuss her move from live-action to animation and how she went about funding her latest film.

When did you first hear of the Albatross Soup riddle and what made you want to take this puzzle and put the process of solving it at the core of your film?

My good friend Gene had come back from LA with this riddle while interviewing for his PhD at UCLA for Cognitive Neuroscience. The graduate program is filled with students obsessed with mapping out the functions of the brain. I think they were drawn to the existential aspect of the story as well. I knew I was.

Like the riddle, I had to figure it out as I went along.

Here in NYC, the riddle spread quite quickly. You’d want to play this riddle with other people as soon as you solved it yourself. It’s really fun to watch what’s going inside your friends’ minds – some take a very analytical approach while others come up with rather absurd responses. That’s kind of the magic behind the riddle and the film. I knew that I had the right ingredients to make a fun short animated film but I didn’t really know what the process was going to be like. Like the riddle, I had to figure it out as I went along.

The last time we featured you on the site, we were talking about live-action short Dear Lucas, Albatross Soup is an animated film, what made you want to tell this particular story in animated form?

To be honest, I went back and forth between executing this in live-action or animation. In the end, the dreamy and non-sequitur quality of the story pushed my decision towards animation. I also had never directed animation before. I was drawn to learning new processes and storytelling techniques that come along with animation.

Do you feel your directorial approach changes when working with animation?

There’s definitely a huge learning curve but looking back, not really. Working with illustrators and animators is like working with production designers and actors. You need to cast the right people, then trust the intuition and talent that they bring to the table. I made sure that I found artists that understood what I was trying to do and were also willing to experiment with me. Sometimes, I knew exactly what I wanted. Sometimes, I had no idea but the process is always the same: communicate as much as you can and be open to new ideas.

I had to be extremely intentional, communicative and clear about my creative decisions.

I enjoy the slow meditativeness that comes with animation. A lot of times, with indie live-action shorts, we are under the pressure of time. We have to work around locations, crew, the sun and the moon. With hand-drawn animation, the expressions and motions of each character are realized frame by frame. Still, I had to be extremely intentional, communicative and clear about my creative decisions. It’s such a laborious craft and we didn’t have the luxury of drawing “takes” over and over again.

Visually Albatross Soup is a colorful, psychedelic film, what made you adopt this particular aesthetic?

The subject matter of Albatross Soup is really morbid. We constantly see our protagonist kill himself over and over again. There definitely needed to be a levity in the aesthetic to balance the film out.

Living and growing up in New York City, I’m surrounded by a dark and brooding force. Our sense of humor is sarcastic and dry and we only wear black, but I actually love experimenting with color and movement. Albatross Soup was the perfect expression for both of my identities.

The film centres around recordings of 50 people trying to solve the riddle, how did you go about finding the participants and recording their responses to the riddle?

We recorded these riddle sessions in groups of 4-6 people. I knew that I had the right friends to come up with funny responses but wanted more textures in the voices to fill out the rest of the film. I enlisted my friend Alex Young, who is now a podcast producer for The Daily at The NY Times to cast and record sessions with a more diverse group of people. She found a group of kids who had the best reactions. I love how the voices and personalities bump up against one another in the film.

How was the editing process of taking all 50 responses and cutting it down to the 7-minute run-time we see now?

We took a traditional documentary approach to the editing process. Every riddle session was transcribed. We pulled lines based on themes, characters and plot. We started with a paper script and worked our way up to an assembly. At first, I tried to edit it all myself, but half a year into the process, I knew that I had to bring another editor in to move forward. I asked my friend Tessa Greenberg, a talented comedic director and editor to come on board for some outside perspective. We were able to bring it to a fine cut within a few weeks.

Alongside the responses to the riddle, the film is really driven by the narrator – how did you go about casting this role and what do you think it adds?

With the exception of setting up the riddle at the beginning of the film, the narrator only has two lines to perform — “yes” and “no”. These two responses are meant to be loaded and sometimes misleading. Whoever took on the role of the narrator had to have a very dynamic delivery.

Vit Horejs is the Artistic Director of The Czechoslovak-American Marionette Theatre. He’s trained in theater and puppetry. If you are lucky, you can catch him in one of his productions around the world or at home in New York City. Watching Vit mesmerize both children and adults alike, I knew that he was perfect for the role of the riddler. It was so fun to record with him, turning those yes’s and no’s into little stories themselves.

Can you tell us a little about the production process of the film – how long did it take to make, who was involved, what tools did you use?

The film took about three years to complete from beginning to end. This was a true passion project for everyone involved. I asked just about everyone I knew for help – friends, family, former employers. Since I didn’t have much animation work under my belt, I heard a lot of rejections. My background in post-production kept the project afloat. I put together a boardmatic with my husband who is a musician and sound designer before pitching it to potential collaborators. We worked together to flesh out the sonic world even before the visuals came together.

Most of our work was done remotely and we could only work on it between our regular gigs. We used mostly the Adobe Creative Suite to draw, edit, animate and color our film. We used Slack for project management. It’s a great way to collaborate even if we’re all in different time zones.

How did you go about funding Albatross Soup?

I funded Albatross Soup myself. I worked gigs on top of gigs on nights and weekends to pay my collaborators a fair rate. As we were nearing the finish line, I had two production companies CAUSE + EFFECT Films and Picture Farm Productions come on board. They said yes because they knew me, and knew the work I had put into the project, but there is very little financial support for indie animation projects in the US.

I figured that it was easier and faster to finance it myself.

I noticed that when we started touring with the film. We screened alongside a lot of European productions that had so many financier logos at the end of their credits! Since my background wasn’t even in animation, I figured that it was easier and faster to finance it myself rather than applying to an institution that did not yet understand my aesthetic. To be fair, I didn’t know either. As a commercial editor, I can afford to allocate my commercial rates onto passion projects like this one. Since working on this project, I’ve learned that indie animation is truly a labor of love, but I think the market is changing and I hope that there would be more opportunities to fund and produce animated films in the future.

The film has played a number of great festivals – Fantasia, Sundance, GLAS – how has Albatross Soup playing these events helped your career and have you learnt anything from screening the film with a live audience?

It’s been a huge learning experience touring with the film around the world and the US. The vibe is totally different with each audience. Some love it for the gore. Some love it for the craft. Some love it just for the colors flying at them, but I think the most essential ingredient is the story. What is being told and how do you tell it. I’ve built a lot of confidence as a filmmaker as well. It feels nice to know that there is an audience for your work. I’m constantly learning to trust and be true to my intuition.

I am now developing my first live action feature – a psycho-erotic thriller about a woman in an all female motorcycle gang whose repressed sexual trauma manifests as a slimy swamp monster. It’s also quite dark with a lot of crossover themes such as guilt, shame and anthropomorphism. We’re still in the early stages, but I’m hoping that if I announce it here, like I did with Albatross Soup, it will come true!