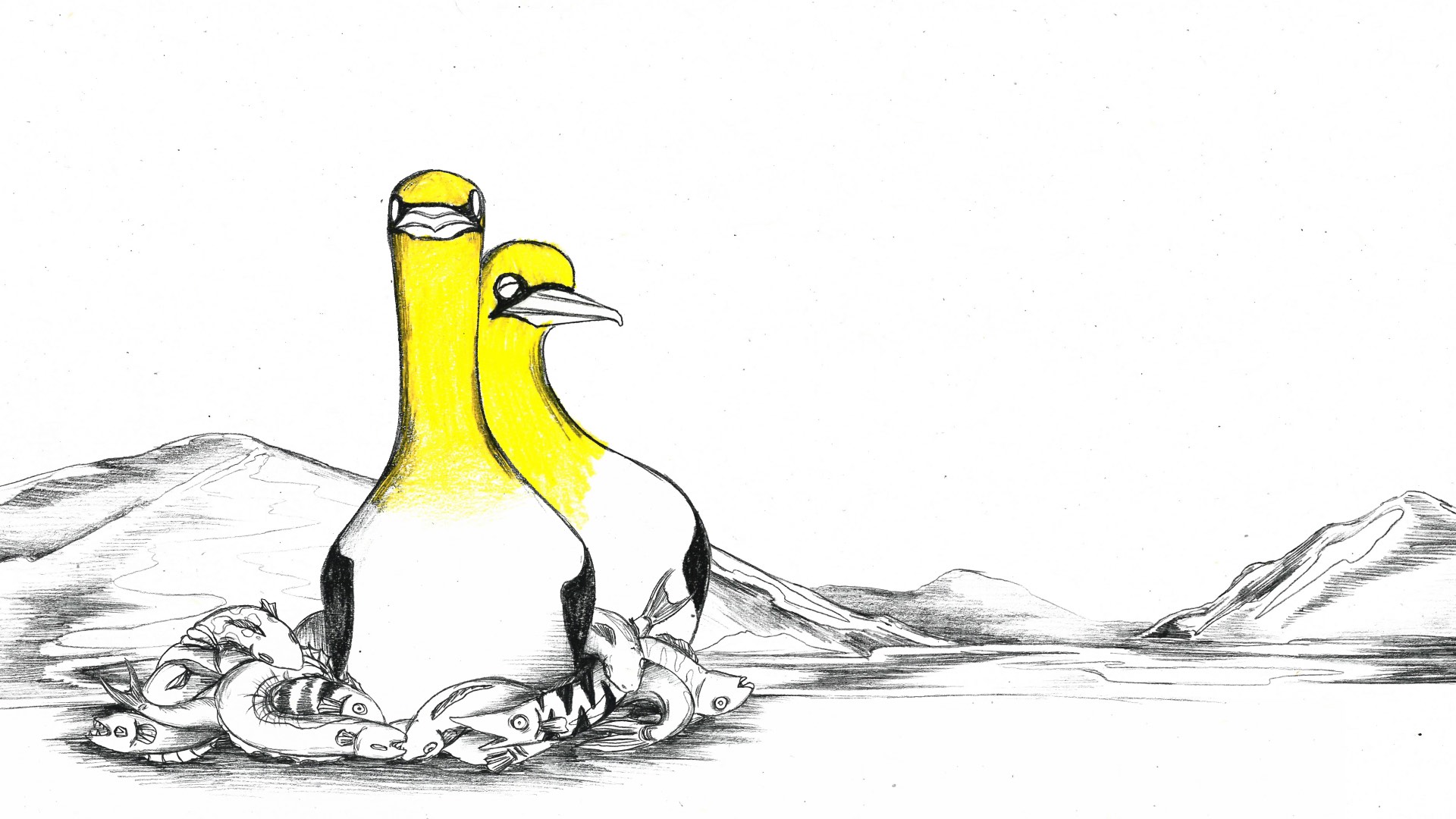 Throughout my years of interviewing filmmakers, a key phrase that repeatedly arises when discussing the aims of a project is ‘relatability’ and today’s featured director – DN alum and recent Royal College of Art graduate Natasza Cetner – is no different. Drawn to the story of the world’s loneliest bird through the news reports she read online, she knew audiences would connect to this bizarre tale and decided to make it the focus of her final graduation film Nigel. A film I was immediately drawn to when I saw it as part of the school’s end of year show, I spoke with Cetner about some of her other favourite news stories about animals and how we could all use Nigel’s story to help us understand each other.

Nigel is based on the real-life events surrounding a Gannet that started courting a concrete replica of a seabird, how did you first discover the story and when did you know you wanted to turn this true-life tale into a film?

One of my hobbies is reading bizarre news stories on the internet about weird animal behaviours. Some of my top favourites are Thomas the Blind Goose who became an LGBT icon, Petra the Black Swan that fell in love with a swan-shaped paddle boat or that seal that slapped a kayaker with an octopus. At this point social media learned the algorithm and knows what to suggest to me, so at least a never-ending source of funny stories is a good side of omniscient Google and Facebook.

Nigel’s actions were so easy for us to connect with.

I came across the news about Nigel’s death around February 2018 and the immediate worldwide reaction of people mourning the death of a quirky seabird struck me. I thought an exploration of his meaningful story and devotion would be an appropriate idea for the final film of my 5 years of education in animation. Mostly because the story is bizarre enough and there’s enough field to play around with it, and yet the main focus would remain on how Nigel’s actions were so easy for us to connect with. 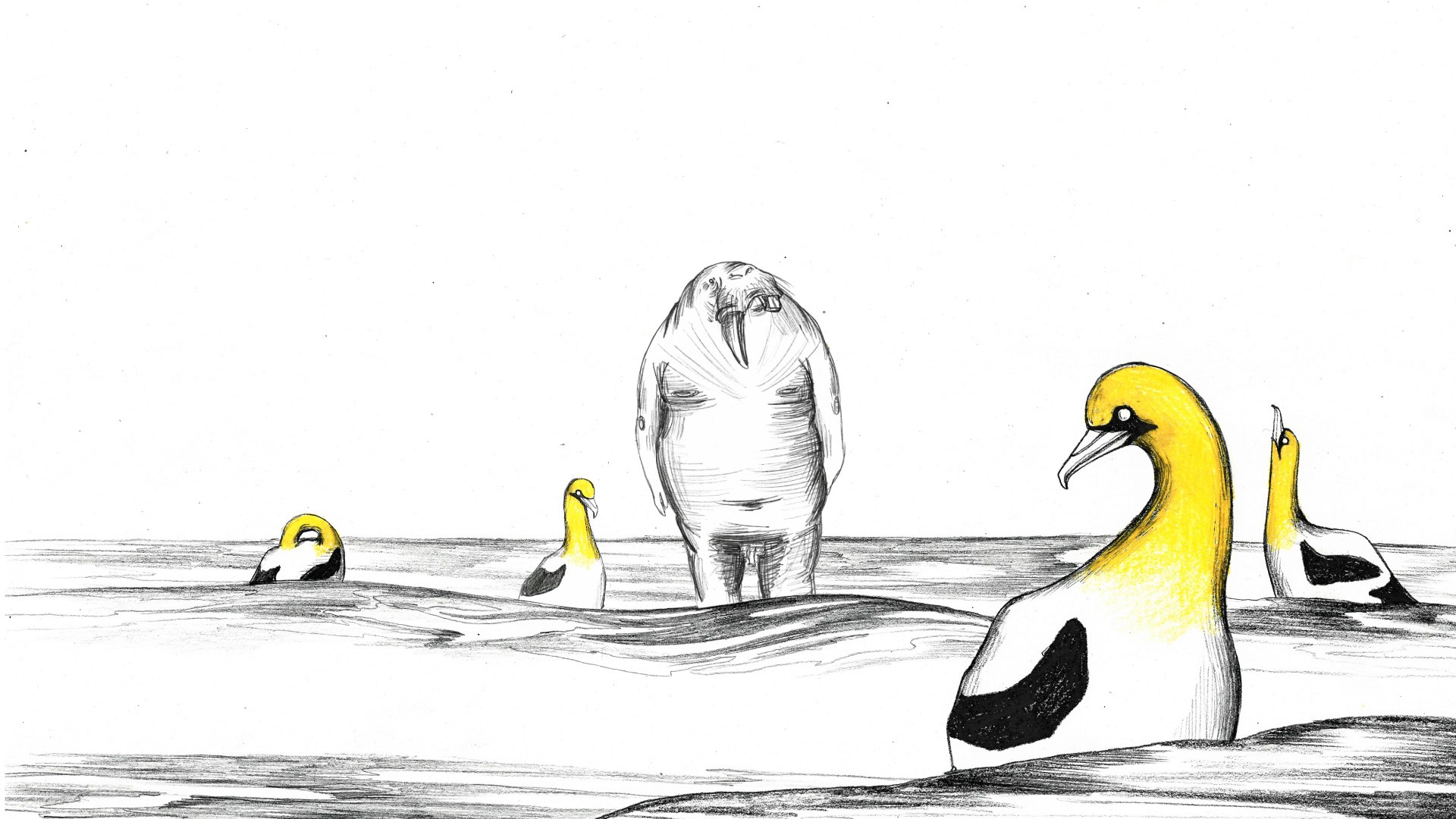 In the real world story, the replicas are placed on the island by conservation officers, but in your film they’re laid out by a strange Walrus creature. Can you explain a little about the inclusion of this character and what you think he brings to your story?

My first idea was to focus on this weird bond that maybe connected Nigel and Chris the volunteer living lonely and taking care of the island. I wanted to explore the blurred line between those two, maybe their identities begin to merge, maybe Chris would start seeing concrete women on the beach, in the style of Antony Gormley? The story of the only man and the only bird on the island.

I didn’t want to make a documentary, I wanted to skew some facts and events in order to emphasise the story arch and make it more dramatic.

In the end, the pressure of time wouldn’t let me explore the idea enough and then to actually produce the short film, I had to go with the idea that made more sense at that time. From the beginning I wanted to focus on how people identify so much with this particular bird, but I wanted to move away from a literal representation of the story. I didn’t want to make a documentary, I wanted to skew some facts and events in order to emphasise the story arch and make it more dramatic. The statue was never destroyed in reality.

No Face from Spirited Away [image from tumblr]

While designing the character of the conservation officer, I started adding more and more wrinkles, a long moustache, etc. to somehow show he has been living on the island for decades. Then one day I just decided that making him a humanoid walrus would let me slip away into the possibility of taking Nigel’s story into the world of fantasy and fiction.

Also, the character of the Walrus was inspired by the duality of the No-Face character from Spirited Away, or rather what kind of emotion he tends to evoke in the audience. Curious character at first, but then he surprisingly turns out to be a monster, to then come back to subtle and quiet at the end. I wanted the development of the Walrus to be a journey itself, to represent various opinions of people about Nigel’s decisions.

Both reading the news stories about Nigel and watching your film, I was surprised by how relatable this bizarre situation is, what message were you hoping to share with this story? 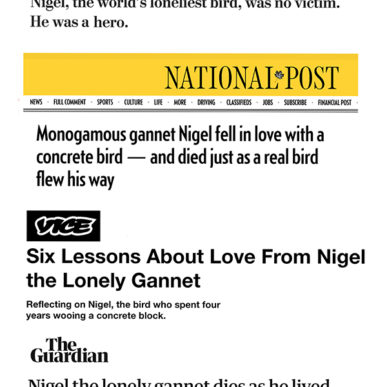 [click to see all the headlines that inspired ‘Nigel’]

At first, we giggle at the headlines such as Six Lessons About Love From Nigel the Lonely Gannet or Nigel, the world’s loneliest bird, was no victim. He was a hero, but then the more we delve into the story of some silly seabird that chose just one statue out of 80 and stayed faithful to it for 4 years building nests and grooming it, that’s when we begin to feel for him.

For everyone of us there was a moment in life when we idealised, to an extreme point, someone we had feelings for, or when our feelings were not reciprocated and yet it did not stop us from pursuing them. The feeling of hopelessness in Nigel’s situation is what makes us feel connected with him.

Maybe peace and silence with his true love is what he was actually searching for.

The fascinating point of Nigel’s story is also the fact, that we will never know if he was actually unhappy in that whole situation. Some scientists say that he possibly arrived on the island as he was kicked out from his own colony, which would explain his social anxiety towards the birds that later arrived on the island. Maybe peace and silence with his true love is what he was actually searching for and he passed away not in misery but in fulfilment.

In the end, I think the message to convey through this story is to question our opinions about other people’s actions and decisions about leading their lives. In today’s world we’re overwhelmed by people’s harsh critiques and lack of tolerance or even an attempt to understand others. It’s also important (which is hard for all of us) to accept when life does not go as we planned it, and when it does not agree with our imagined version of it.

My favourite part of the film is when things get dark (visually and thematically) with the “death” of Nigel’s mate. However, the film ends with a somewhat upbeat feeling, quite different from the real-life conclusion of Nigel’s story, why did you decide to end your film here?

Hahah I think that’s my least favourite part of the film, as it was way too rushed. I think one of the main reasons why I decided to end with the happy ending was the limited length of the film. I could easily make this film 15-minutes long if I had enough time, but as the film was in a way a tribute to Nigel and his devotion, I was satisfied to end it with the happy moment of his life. Before things took a dark turn for him.

Visually, I really liked how the stark aesthetic magnified the isolating feeling of the location, but can you explain why you decided to use this particular visual style for your film?

My main inspiration for the visual aesthetic for Nigel were Japanese landscape woodprints from the Edo period. Most of the time, in such masterpieces by Katsushika Hokusai or Utagawa Hiroshige, people pictured in their works just seem those tiny elements lost in the world of nature.

The other main inspiration was The Red Turtle by Michael Dudok de Wit, in terms of presenting a character lost in his loneliness and isolation on the island. What always touched me in Dudok de Wit’s work is the way he manages to convey that particular feeling of longing, that I would imagine the volunteer on the island was feeling. Waiting for years for something to change, for the birds to arrive.

What would you say was the biggest challenge throughout your production?

I think that the hardest task was actually to finish this film on time and to maintain a “fresh-eye” during production. As it was a graduation film at the Royal College of Art, I had around 8 months to work on it, which means I was working every day for around 10h. It’s a normal thing during such projects, but it was really hard for me to work on everything (animatics, backgrounds and animation) at the same time and still remain enthusiastic and with a fresh attitude.

I think such a short time for the production of a film was the biggest challenge in all of it.

The cure to it was to vary the workload as much as possible. If I was too drained creatively, I would colour frames with crayons and then come back to plan out missing shots. The film was first roughly animated in TvPaint, then printed out and traced on paper, on the other side, with crayons and soft pencils. So yeah, I think such a short time for the production of a film was the biggest challenge in all of it.

Ok, finally – we always like to end our articles by looking to the future, so what are you working on that we should keep an eye out for and where can our readers go to follow your work?

I am currently working on developing a new animated short with Irish production company Cardel Entertainment. This time it will be a dark comedy focusing on a story of Headless Mike, a chicken from 1940s that lived without its head for 18 months. He became a circus celebrity by being part of freak shows with such curiosities as two headed babies or the three legged man and finally died in a motel at night during his tour across the US.

I want to explore his feeling of isolation and longing for normality.

So far it has been good fun to work on style frames and storyboards. Mike is such a particular character, by being so grotesque and gory, while at the same time hilariously clumsy. I want to explore his feeling of isolation and longing for normality, while being dragged into the world of mockery and abuse.

My works can be followed on my Instagram, Website and I have my previous films and Nigel on my Vimeo

Nigel is one of the many great projects shared with the Directors Notes Programmers through our submissions process. If you’d like to join them submit your film.