With its curation largely revolving around fantasy and horror, the Sitges Film Festival has long been one I kept an eager eye on. So when a short dropped into our submissions with the Best Short Film Prize from the Animation section of the festival as one its accolades, I knew it was something I had to check out and Sang Joon Kim’s The Wheel Turns doesn’t disappoint. A visually impressive short with a weird, but relatable storyline, it’s easy to see why the jury at Sitges was so impressed. Director Sang Joon Kim joins us to discuss how his exhausting work life inspired the story and explains his admiration for the toad’s short tongue.

One of the things I really loved about The Wheel Turns was just how relatable it is. It’s obviously a fantasy piece, but very much grounded in real-life. I’d love to hear a little about what inspired the story?

Funny you ask because the story was started on a very normal day that I think many can relate to in urban life. I used to be a full-time staff at Framestore, NY as a digital compositor which frequently required late nights in a row. After a few days of late, late, late nights I saw myself reflected on a subway window on my way home – it was me but it wasn’t me at the same time.

That moment started raising questions because the man in the window didn’t seem happy.

I saw a very exhausted, soul-less man in the window. I loved what I was doing as a digital compositor but that moment started raising questions because the man in the window didn’t seem happy. Why is that? Since when did loving-work become an almost mechanical routine for me? After a series of questions to myself, I started writing The Wheel Turns.

It feels like alongside the relatable aspect of the film, there’s also a strong message you want to get across to your audience, can you explain what you were hoping a viewer would takeaway after watching The Wheel Turns?

I wanted the viewers to experience the Reflection-in-Subway moment as I did. I was hoping and am still hoping that they would finish the film asking themselves if they are happy at what they are doing.

I wanted the dialogue at the start and at the end of the film to be as powerful as they could be.

Your film is largely dialogue-free, apart from the opening/closing narration and the odd line of dialogue delivered by characters, was this something that happened organically or had you always imagined the film to be more of a visual piece?

It was planned from day 1. I wanted the dialogue at the start and at the end of the film to be as powerful as they could be, which led to the rest of the film being almost dialogue-free in the middle, for a distinctive contrast.

Talking of characters, I love the design of your main character and how he appears toad-like even before the transformation, but why the toad? We often think of characters stuck in a dreary routine as rats or sheep.

The Toad character was designed and inspired by an experiment of a frog in a pot where it doesn’t notice water boiling if the water temperature rises slowly. Though a frog just didn’t seem a fit to me as the main character and I preferred the bulkiness and the roughness of a toad compared to a frog.

I loved that toads have shorter tongues than frogs.

Also, as weird as it might sound, I loved that toads have shorter tongues than frogs – they appear more effortless when they catch flies than frogs. 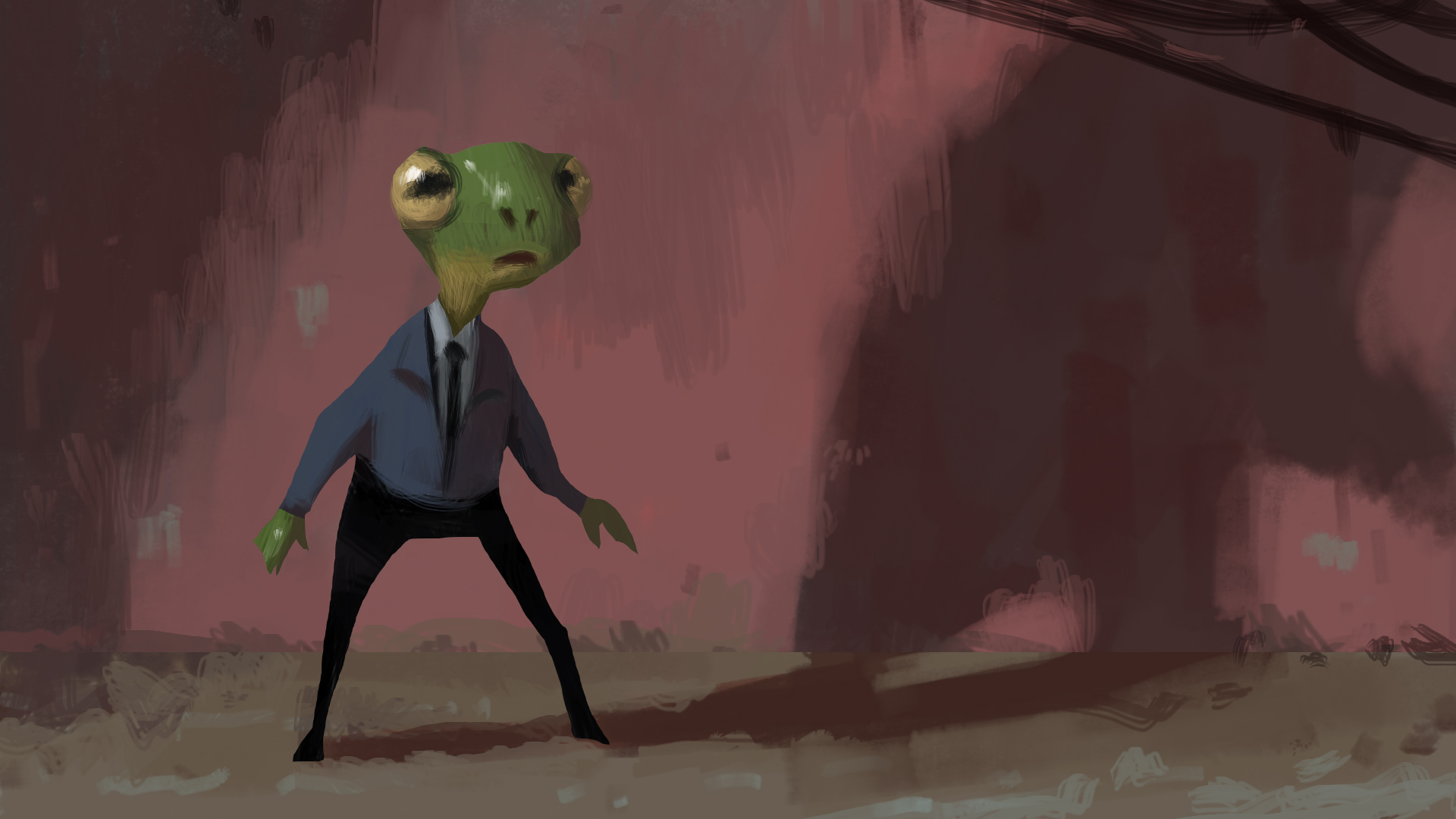 The film sports an impressive aesthetic, is the final look of the film always how you imagined it or did it evolve over time?

It was intended to be that way from the start. I thought painterly, texture heavy visuals would work the best for the story and it was a natural decision as our Art Director Choong Yoon comes from a fine art background.

How long did it take you to create The Wheel Turns? How big was your team and what software/tools did you employ in its creation?

It took 3 1/2 years from start to finish. The team started as just myself and Choong but evolved to be a larger team. 4 animators including myself, a project coordinator, 2 background artists, 3 concept artists, a composer, a sound designer, 3 voice actors and so on. The team running the film on a daily basis was just myself and Choong but we were supported in so many ways by our genius collaborators.

The film was animated with TV Paint, backgrounds were done in Photoshop and final composites were made in Nuke.

The film’s had a healthy festival run, including winning the ‘Best Animated Short Film’ award at Sitges 2018, what has being able to screen the film at festivals, and the resulting critical acclaim, meant to you?

I wish I could elaborate it better but it was all just so surreal to me. I used to carry around a small digital camcorder when I was little – I didn’t even know a thing about a film or any visual industry but remember loving filming so much.

As I grew up, the idea of filming or creating a moving image was buried in the back of my mind, but after digging it up and getting to visit all those great festivals was so overwhelming in the most wonderful way. Seeing audiences watching my film in person brought me so many emotions as well.

What are you working on next and where can our readers go to follow your work?

I’m working on another 2D animated short film; Mehari (meaning echo in Korean), based on my childhood. I grew up in a huge redevelopment boom period in Korea and wanted to portray what it meant to me and what we may have lost during those times.