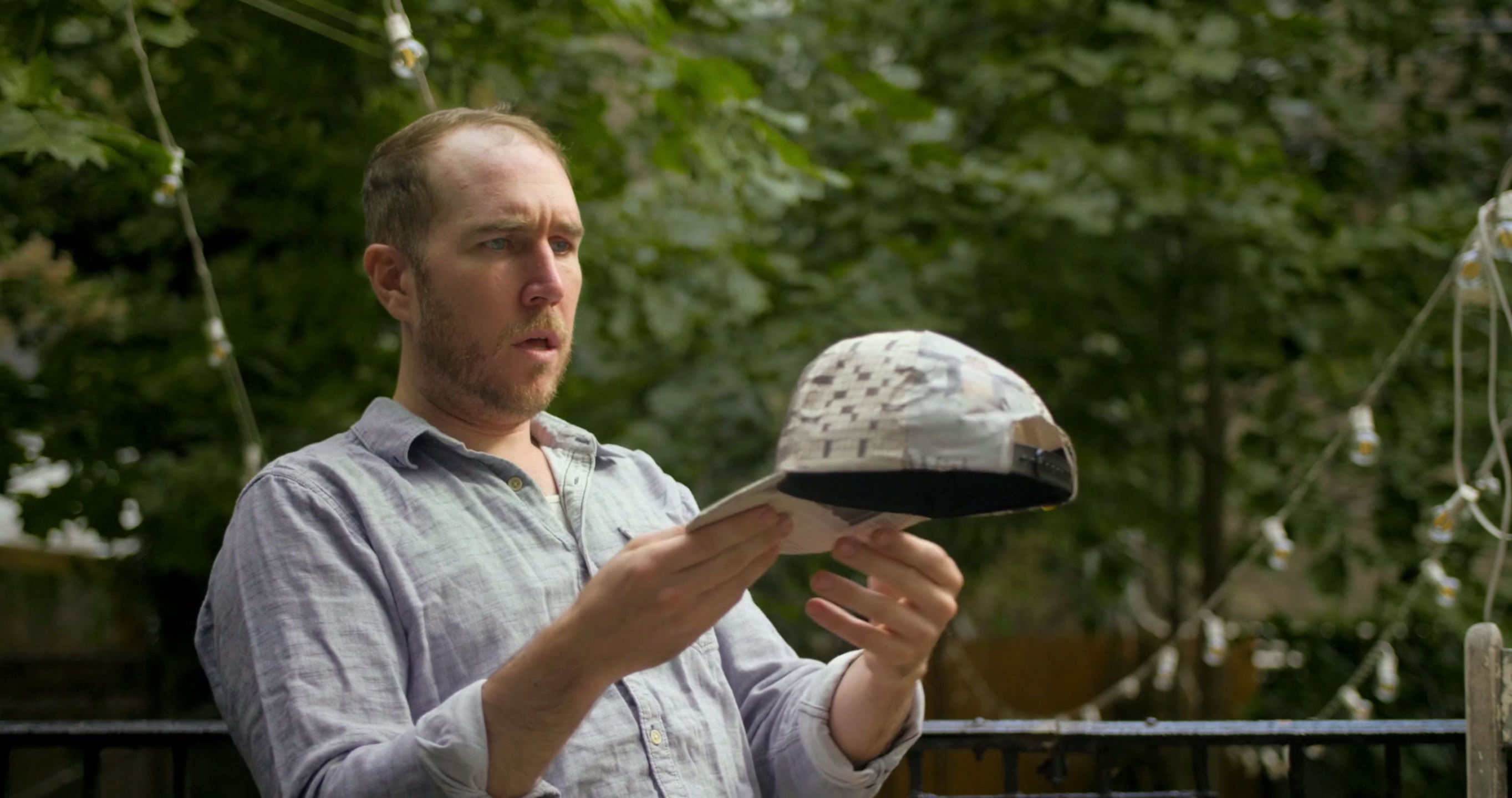 The myth of the Midas Touch is given a devilishly playful update in Colin Read’s comedy short The Midas Hat. Telling the story of a poor New Yorker (Dylan Kammerer) who turns everything he touches — including cereal, dollar bills and newspapers — into a hat, it’s a fun exercise in the power of practical effects, especially match cuts. We sat down with the three time DN alum to discuss the myriad ways he brought the idea to life.

How did the idea for the film come about?

My friend Brian Downey has a small company called Falcon Bowse. They make hand-sewn men’s hats. One art project he did a few years ago made hats out of refuse scraps from around New York. We made a pseudo-nature documentary about it. But when I saw the absolutely insane hats he was making now, I really wanted to make something else. He was cutting up every object imaginable and turning it into a functional or semi-functional hat: pickle skins, popcorn bags, salami, soccer balls and seaweed wrapping. The Midas Touch idea came easily.

The film has a lot of fun match cuts. How did you work to maintain continuity and keep the effects realistic?

I had a bit of experience doing similar effects. In 2017, I directed a music video for Radiohead with a lot of precise switches between day and night, using simple techniques like blocking in rehearsal, having actors hit their marks and the camera hitting its marks at the same time. That was much more complicated than this one. For this I called up the same actor, Dylan Kammerer. As we’d been through the process before I knew it would be easy to get back into the rhythm for this one.

We would set up the shot, do the initial shot, then immediately redress for the transformed version to replicate the movement straightaway. That gave us the least amount of downtime for these little differences to occur. If we thought we didn’t have it then we would just run through the whole thing again. We ended up with some pretty consistent results.

To add a little bit of oomph to the match cuts we threw things in Dylan’s face.

I always think that simpler is better. It was important to make this feel practical instead of post-effect heavy. That’s how I’ve striven to do everything in my career because it’s more fun to accomplish things on set than muck about on a computer. That being said, there was some necessary clean up in some shots to maintain consistency for things like wind and trees. 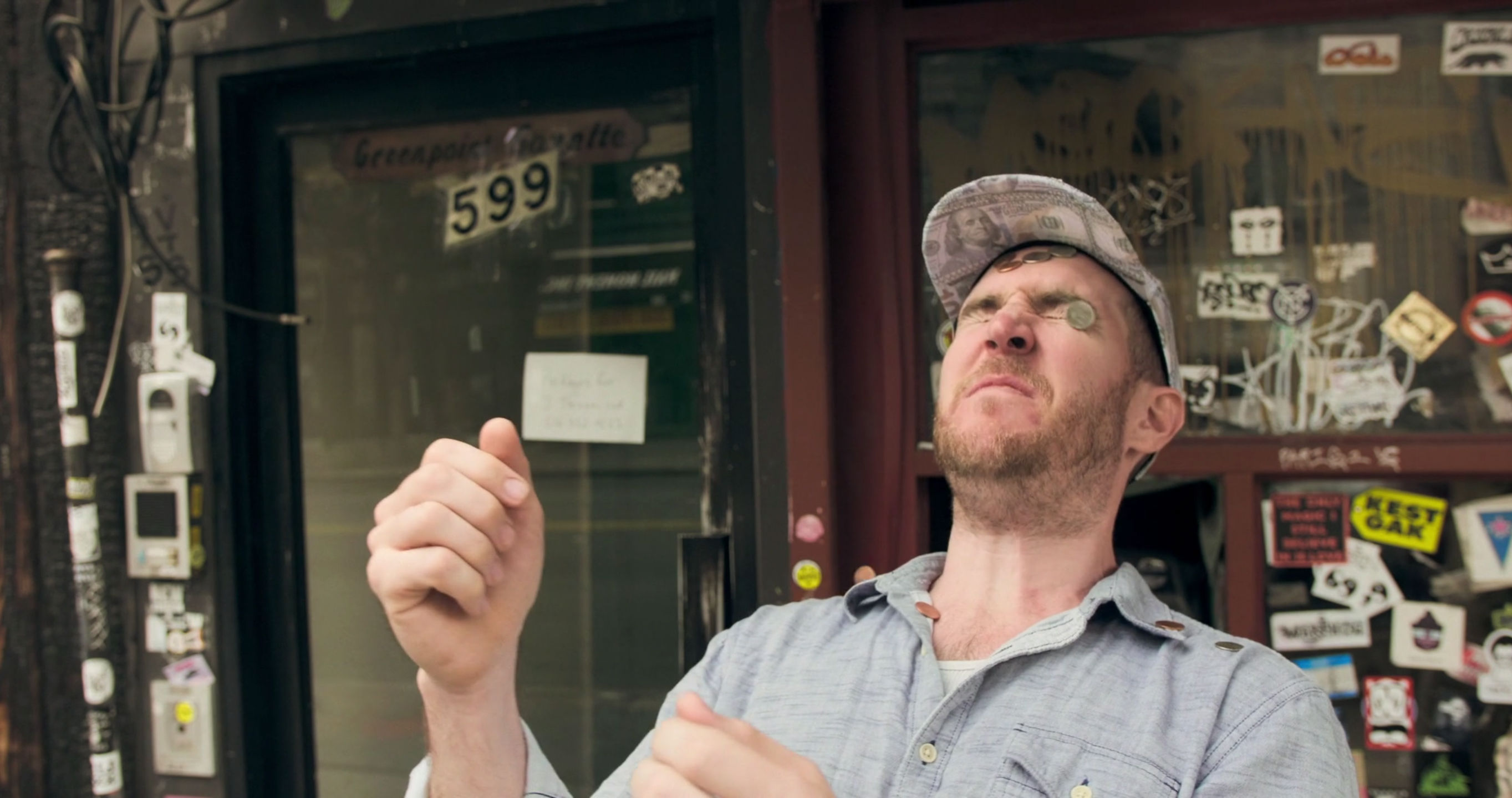 To add a little bit of oomph to the match cuts, we threw things in Dylan’s face. For example, for the cereal that was flying everywhere, I just threw cereal in his face. It felt a little sadistic but it was also a little satisfying. Additionally, to make our transformations a little more light we blasted a leaf-blower in Dylan’s face. It gave that little extra movement to the shot and also gave Dylan a physical cue to work off. For the newspaper cut we shredded pieces and stuffed them in the leaf-blower. It was pretty tricky to nail, but we would just review what we had to see if we’d gotten it. If not, we’d run it again.

How was the editing process between these cuts?

There was really only one way for it to work! We strove to replicate movements really precisely while shooting, and that meant that when editing all I really had to do was throw the two tracks on two layers above each other and just find whatever point in the middle had the most energy. The limited amount of coverage took out a lot of the guesswork: for most of them it’s just one shot and effect! 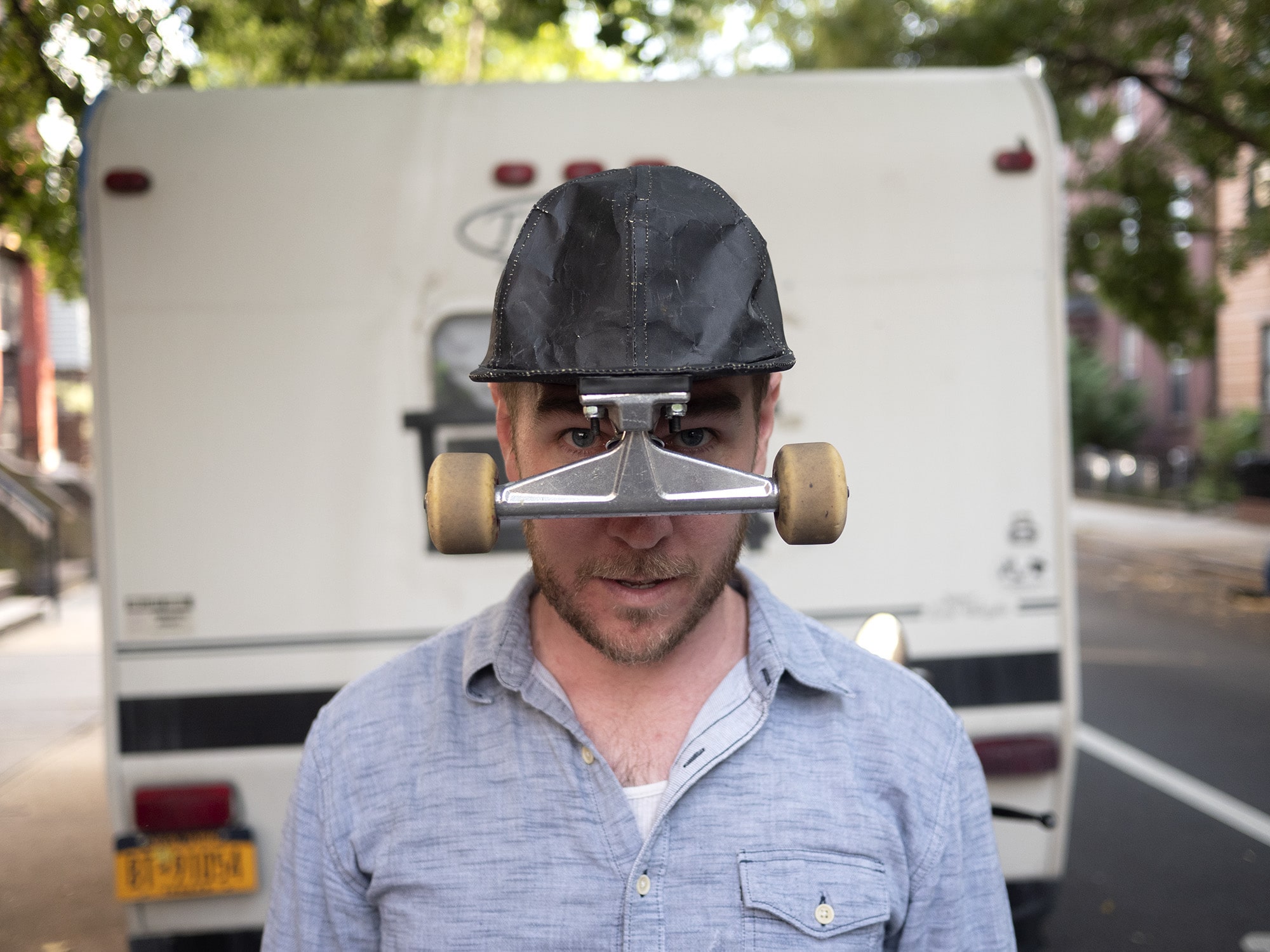 Were all the hats ready-made or were some created for the film?

Most of them were and I wrote around them. But a few certainly weren’t. I thought the stool would provide a good moment to have one hat that actually looked good. Then he could have that line: “This one’s kinda nice”. I asked Brian if he had any leftover fabric and he wrapped a hat together in just 45 minutes. For the shower curtain, he didn’t actually have a shower curtain for the bathroom scene so we went out and bought two identical ones: one for him to string up and another to turn into a hat. For the dog scene, I wrote up the scene without having one ready. We just found a friend’s dog we thought would look funny and identifiable as a hat. Brian found a fabric and sewed it up to look just like it.

Did you always intend to have something alive turn into a hat? After all, this is the tragic conclusion of the original myth…

My original intention was much darker. I wanted him to be home, surrounded by all his hats before his girlfriend returns home with a suitcase. She tries to kiss him and he tries to fight her off before she is turned into a hat. In the end, we decided it was too gruesome for the light-hearted nature of the project. I figured a dog was both funnier and a little more excusable.

You made the film over one weekend. Was it easy to bring a team together quickly?

It was just a handful of people; myself, my DSLR, a cheap little lightweight tripod, a couple of LED lights and a couple of buddies who came to help out. That wasn’t hard at all as we could carry things around in a couple of backpacks and split some beers at the end of the night.

If I come out of a production and people didn’t have fun then I failed.

That’s always the goal for me. If I come out of a production and people didn’t have fun then I failed. It’s important for me not just to end up with a cool product but for the whole experience to be a really positive thing for everyone involved. That being said, I realised I have a tendency for putting talent through really arduous conditions. For example I did a Danny Brown music video a couple months ago and made him and Run The Jewels walk through the freezing New York cold. I realise that I have a sadistic edge towards talent, but it comes from wanting to make really interesting things. Hopefully, they don’t mind too much and aren’t too turned off about hiring me in the future.