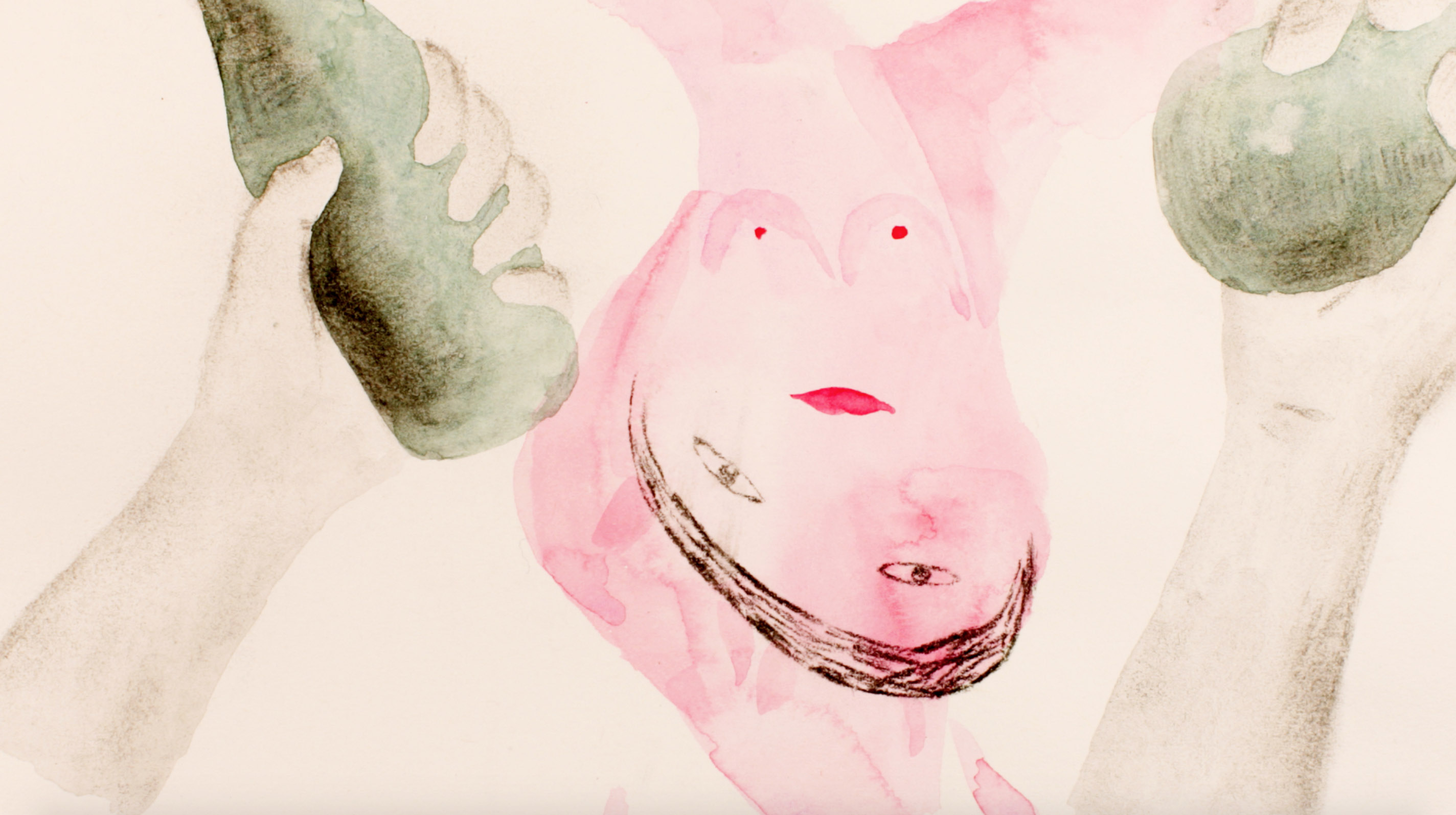 Deeply moving and introspective, Happy Ending depicts the experience of a sex worker using a unique poetic language: fragile, sensual and spearheaded with emotional and physical pain. Directed by EunJu Choi, the four minute hand-drawn animation is a poignant tale, based on an anonymous testimony of a Korean prostitute, which communicates immense depth with just a few simple words and plenty of style. Fluid motion in a tranquil palette guides us through a raucous brothel, then straight inside the body and mind of the woman, forcing us to endure the experience of being desired, used and discarded ourselves. DN caught up with Choi to talk about controversial themes, erotic sound design, finding a balanced visual language and plenty more.

Happy Ending is based on an anonymous testimony of a Korean prostitute. How did you come across it and why did you feel compelled to make a film about it?

The idea of making a film about a prostitute started from my childhood memory. I spent my childhood in the red light district near the USA army base in Busan, South Korea. What I saw, the red neon colours and people’s giggling sound there had stuck in my memory. In 2011 in Korea, many Korean prostitutes protested against the prohibition on sex trafficking, which led to intense controversy. All these things encouraged me to make a film about prostitution.

During the pre-production, I contacted a WomanHouse in Korea and interviewed an English former prostitute through the sex workers community in London. However, I realised that this subject was engaged in complicated situations such as the immigration issue, legalisation, criminalisation, feminism, etc. I considered how to deliver this controversial topic to audiences. But, coincidently, I found one Korean sex worker’s page on social media, talking about her job and her clients. I was inspired by how she portrayed her feelings when her clients objected to her body and desire. So I decided to illustrate how she uncovered her objectified pleasure. 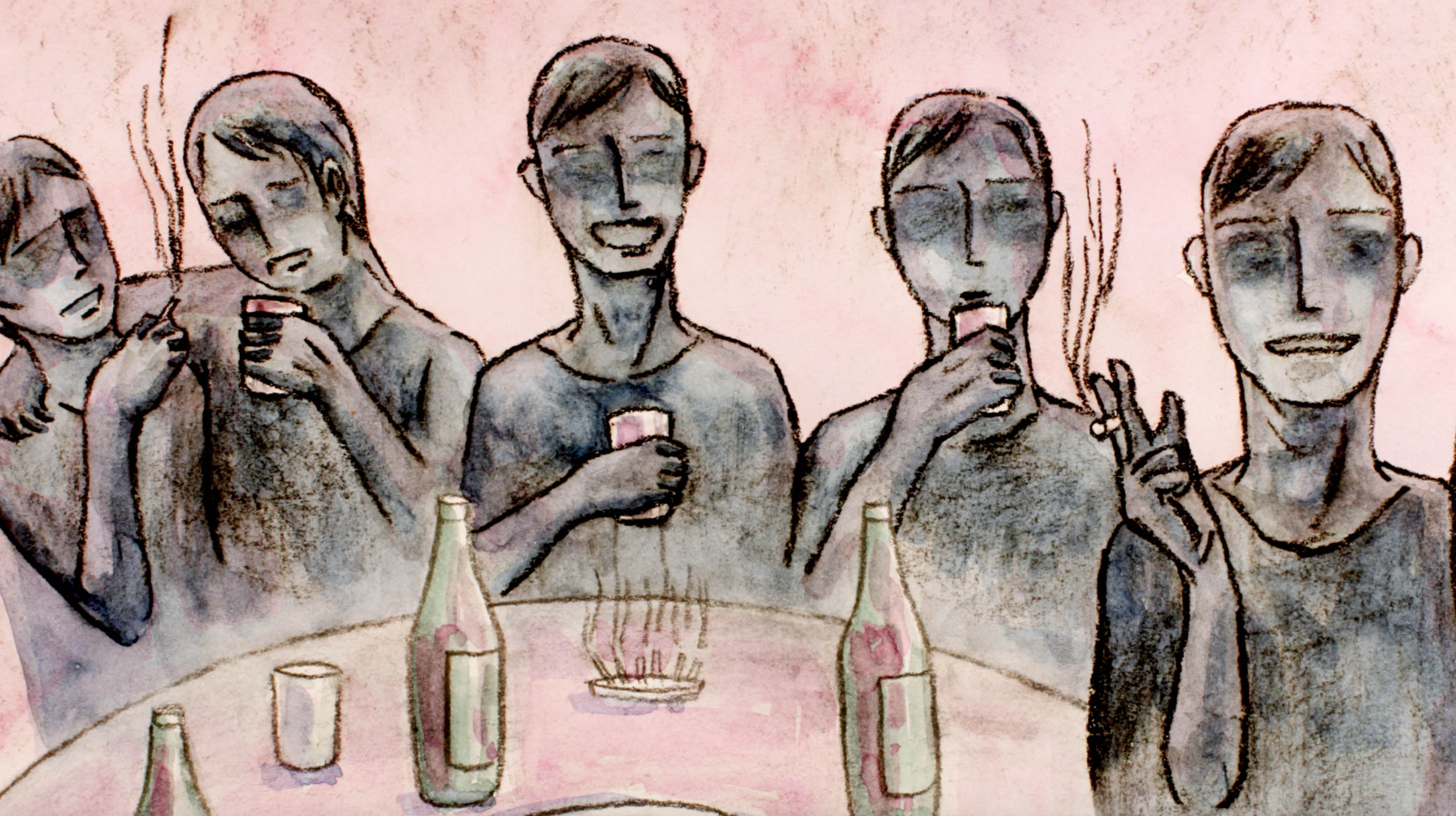 The fluidity of the animation style gives it a surreal and elusive quality. Why did you choose to do a hand-drawn animation rather than digitally animate it?

Actually, I animated mainly on TV Paint due to time management. Animating on the software guided me to figure out the camera movements efficiently. But some scenes showing my protagonist’s emotion climax were done directly on paper. Animating on paper can be led by instinct and emotions, which I believed could create her ambiguous feelings.

And I wanted to blend the beautiful and the brutal in sexual ways. I think that choosing watercolour can produce fragile beauty, which corresponds to her delicate body and emotions. So, after finishing animating on TV Paint, I printed every frame by frame. My assistants and I then coloured on each frame with watercolour and charcoal. 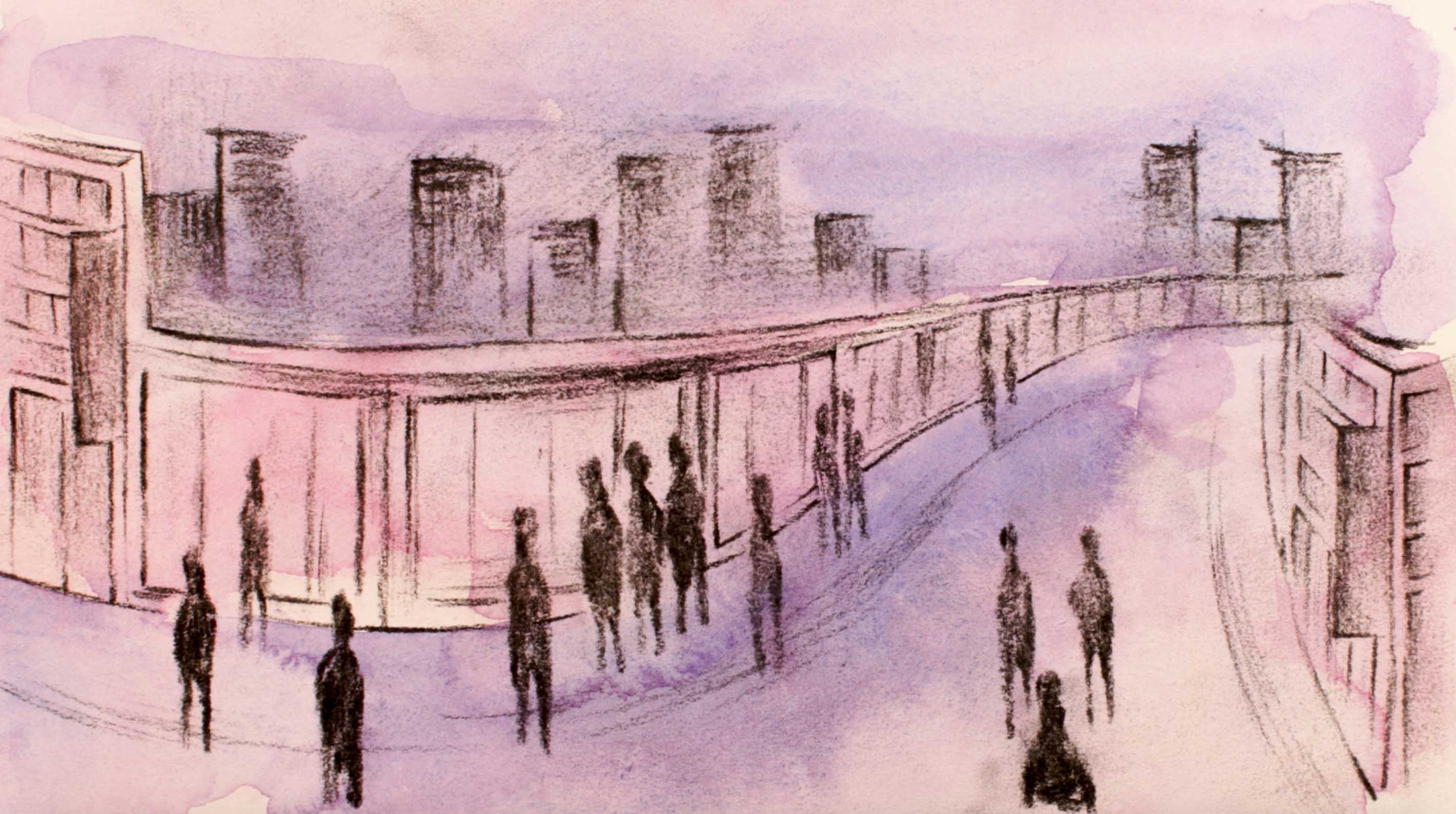 Can you tell us about the overall creative process for making the film?

I adapted her testimony and wrote an interior monologue with a poetic style. I didn’t want to bring her actual text and voice into the film to protect her security so I hired a professional actress in London for the voiceover. After finishing the script, I worked on the storyboard. But in a few abstract scenes, I directly animated on the paper without the storyboard.

My big challenge was illustrating her battle with fragile emotions and sexuality. I wanted to visualise the flow of female desire engaging in a body. However, I didn’t want the audience to have offensive feelings when she narrated her sexual experiences with her clients. I referenced many female artists, such as Tracey Emin and Louise Bourgeois to deal with the direction of female sexuality. And The hat (Le Chapeau) by Michèle Cournoyer influenced how the female body could be transferred by the different perspective. So, I focused on drawing the female body placed in the confined space where her desire was pushed. This practice helped me to develop the visual process for making the film.

My big challenge was illustrating her battle with fragile emotions and sexuality.

The sound design plays a key role here; at times soothing and sensual, then suddenly sinister and quite disturbing. What was the thinking behind it and how did you achieve this effect?

My sound designer, Benjamin Goodall, made sound corresponding to the expressions of her body and pleasures like an orgasm to evoke sensuality. He also created distressing sound to bring out her pain. It was important for the sound to explore the exteriors and interiors of her body and desires. She was objectified by her clients, which was quite oppressive. So the sound needed to support describing her pain and pleasure simultaneously, enabling the audience to imagine it. 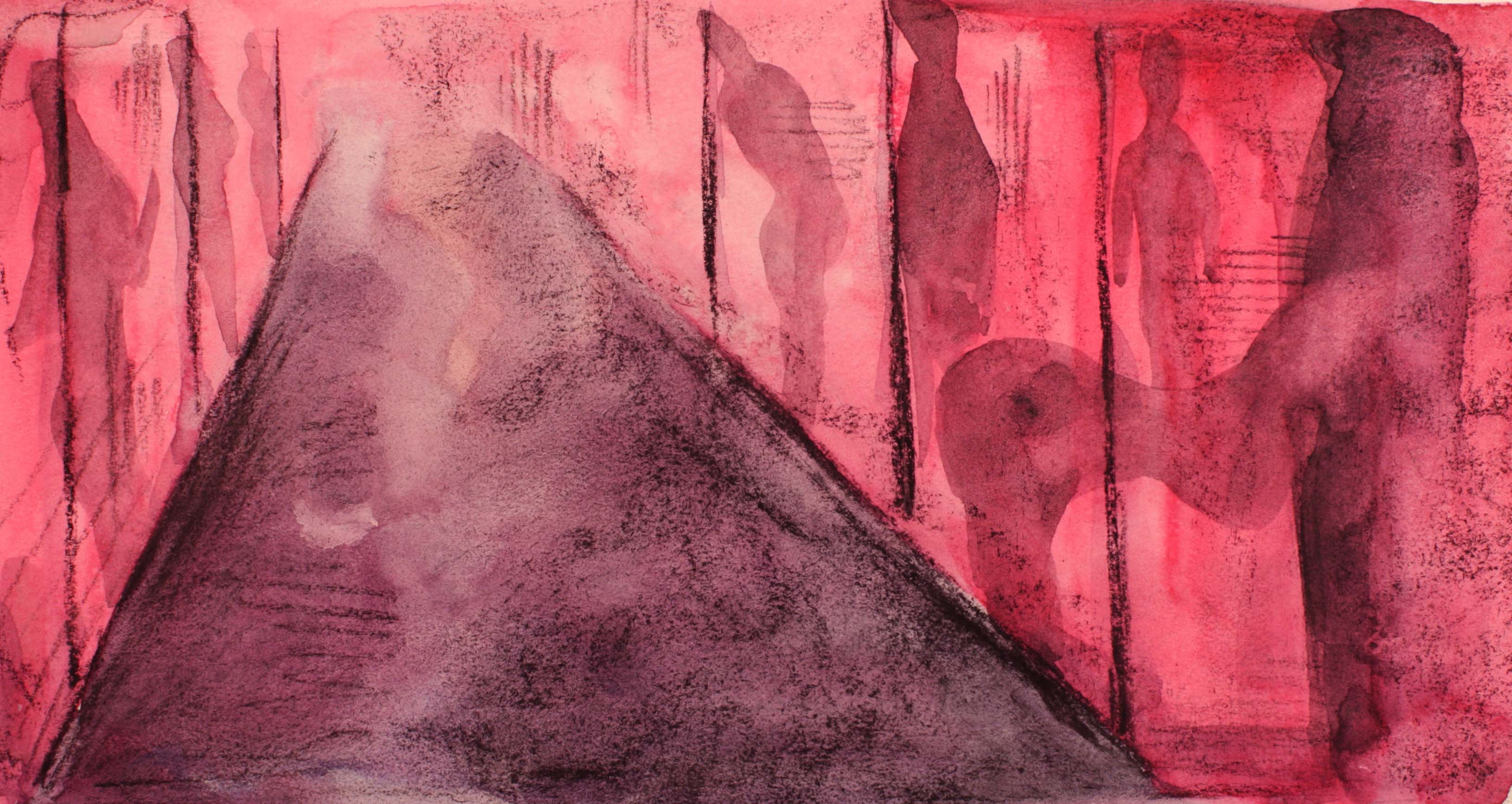 Although there are scenes which evoke discomfort and pain, we never get the sense that the narrator is a victim. In fact, she seems to be in total control over her emotions, her body and even her customers. Why was this important to you?

The protagonist in my film was forced to feel her pleasure when she was selling her body. She mentioned that being a sex worker she cannot be accepted as a victim due to social prejudice, even if she is exposed to violence. The discrimination buried her real voice. So I brought emotionless narration to direct her objectified feelings, which can emerge her pain.

In this film, I want to explore what it is like to be the subject of other people’s pleasure regardless of your own will.

What are you hoping the audience will take away from Happy Ending?

Talking about prostitution is very controversial. In this film, I want to explore what it is like to be the subject of other people’s pleasure regardless of your own will. Besides, even though this film talks about the sex worker’s pleasure I believe that this film also reflects all women’s stories. It is important for me to open women’s sexuality, that is their liberty. I believe that the audience who identify with my film can follow the prostitute’s emotions and could consider how women’s bodies and desires are expressed at present. 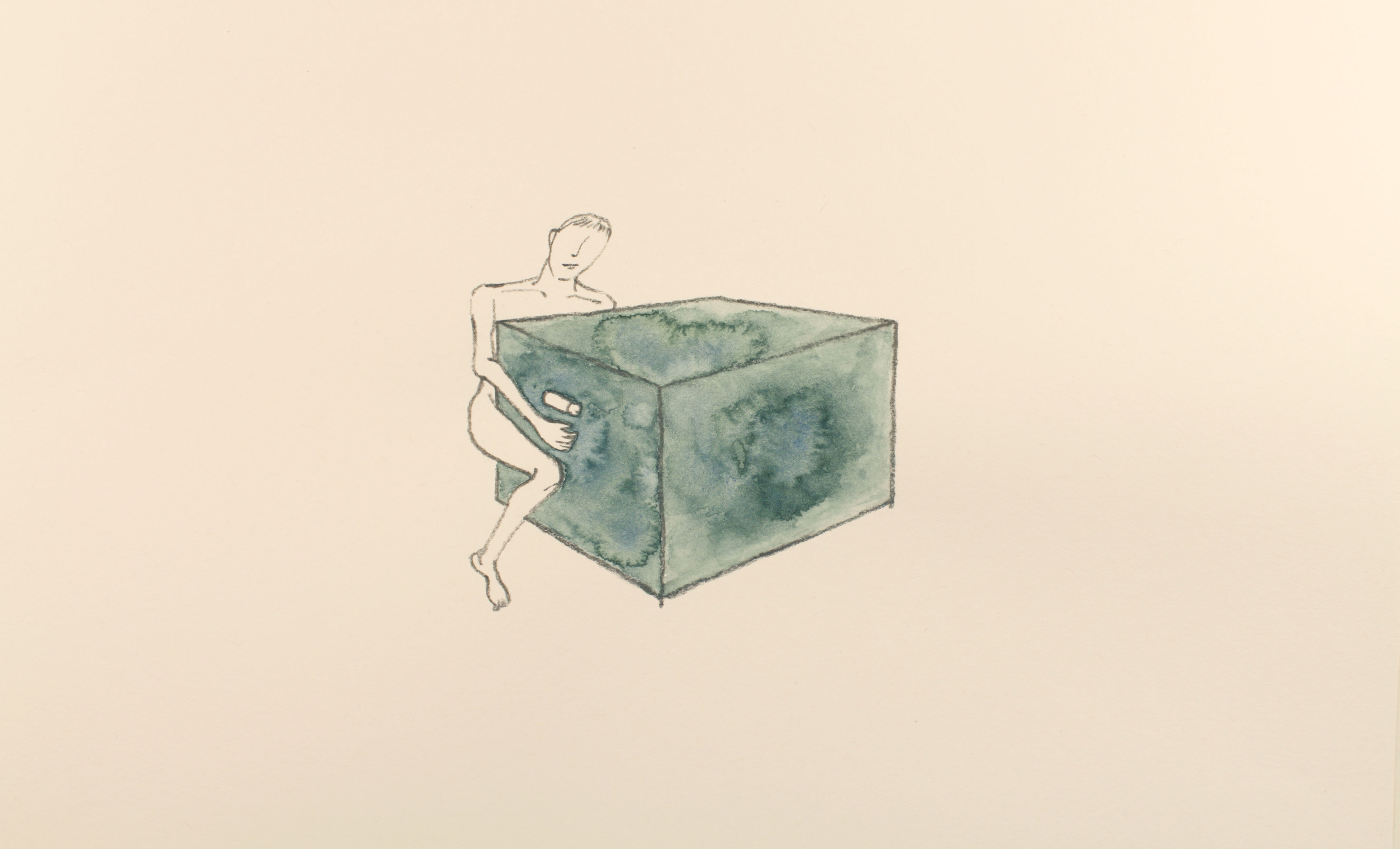 You shared that you are drawn towards themes like desire and violence. Why do you feel the need to explore these in your work?

In my film, I illustrate how my protagonist explores the interplay between her body and mental state. She is penetrated deep into her mental perceptions by the invasion of clients. I aim to describe the unpleasant moment which intertwines with disgust and pleasure. It could be hard to define for the audience and to figure out her situation. However, there is no morality happening in the brothel where it seeks only desire. And that is prostitutes’ reality. I want the audience to feel the tension of her reality.

I am currently developing on my next film. The story got inspired by my ex-boyfriend, who overdosed with the painkillers. He had a psychedelic experience caused by the side effects of medicines abuse. I want to explore the sufferer’s mentality and pain for my next film.

Happy Ending is one of the many great projects shared with the Directors Notes Programmers through our submissions process. If you’d like to join them submit your film.