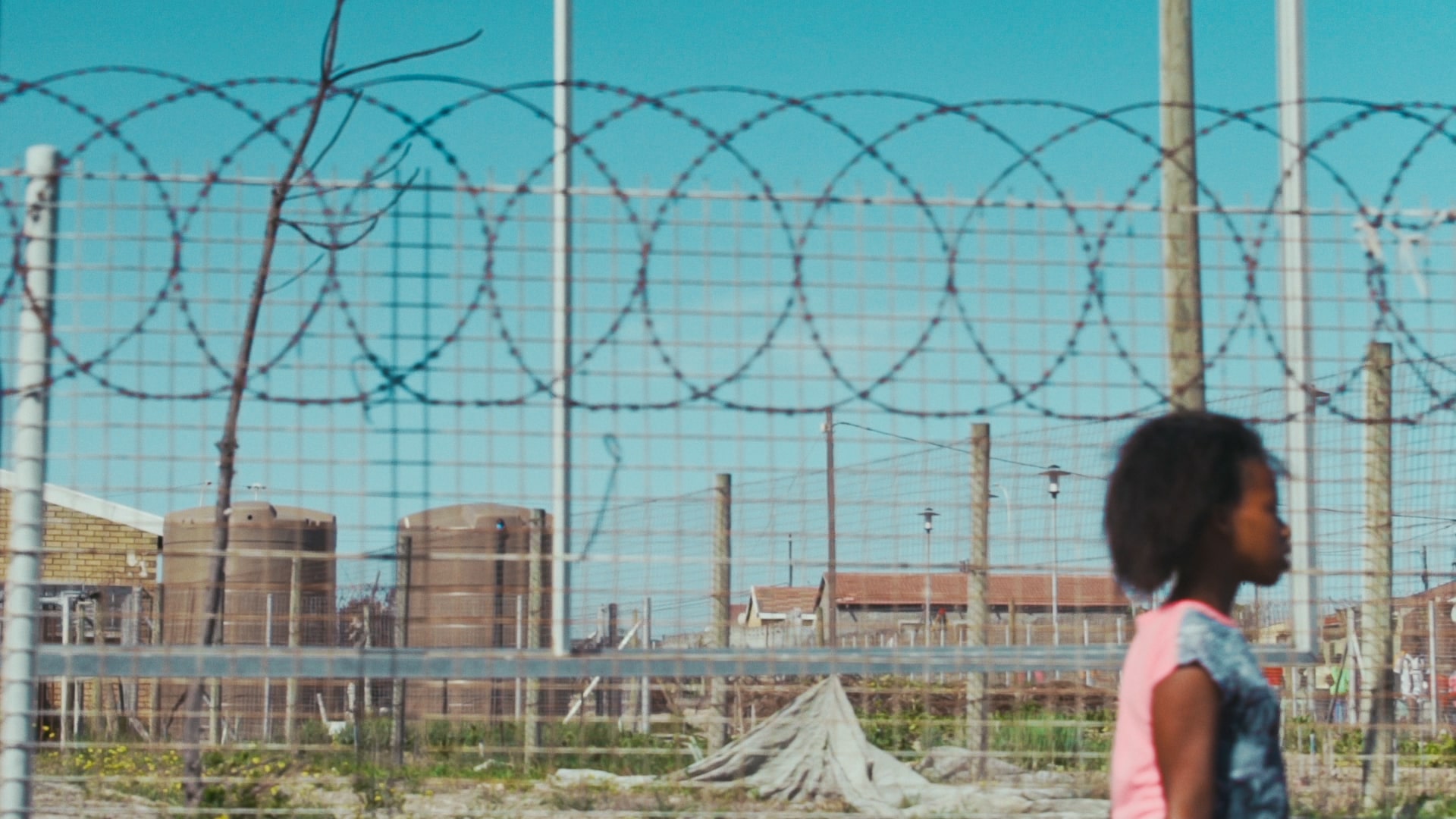 Waves is a poetic slice-of-life documentary telling the story of three young South African girls, Chandre, Erin and Rabia, who find their lives transformed by the power of surfing. Balancing scenes of great beauty with shocking tales of violence against women, it’s a tale of resilience and hope even in the most adverse of circumstances. We talked to the Director Jessie Ayles about creating the particular mood of the film, shooting in one of the most dangerous communities in Cape Town and her unusual approach to sound design.

When I started it, I didn’t know exactly what I was going to make. I just followed my instinct, which was that I knew I wanted to tell something from the perspective of young girls in really challenging communities. I started doing a lot of research when I was in South Africa as I’ve found the best way to find stories is connecting with interesting NGOs and activists from the ground. I found this interesting one called Waves for Change teaching young people from violent communities how to surf. Then I honed in on three girls who were friends. As I was just spending time with them I became more aware of what their daily life is really like. That’s where the gender-based violence and femicide angle came from.

I didn’t know exactly what I was going to make. I just followed my instinct.

You have South African heritage yourself. Was it important to tell this story on a personal level?

My parents are South African and they emigrated to the UK where I was born. But I have family there that I’ve gone back to visit so I feel a bit pulled between these two places. I’m very interested in exploring the issues within South Africa that my parents didn’t explore. It was as much a journey for me as it was about making the film and the people within it. 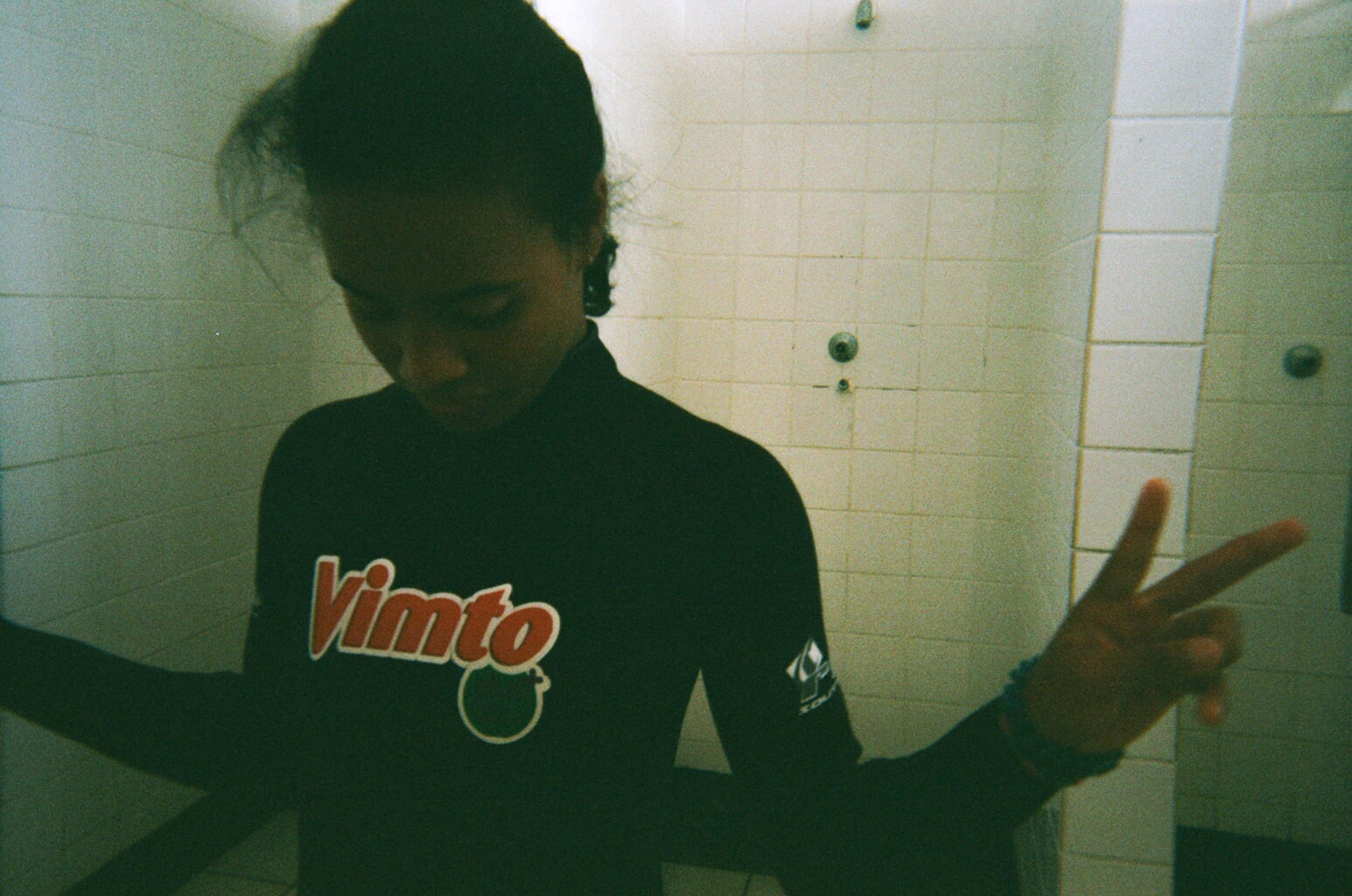 This idyllic world of the beach is contrasted with the violent reality of Lavender Hill. Was it difficult to strike a balance between these two worlds?

It was really easy to be honest because that’s Cape Town and South Africa in a nutshell. It’s this hyper-contrasted, imbalanced, weird country where you’ve got the highest disparity between the wealthy and the poor set against this amazing natural landscape. That’s what struck me about the charity. It emphasised these two worlds and how close they are to each other. All these young people live about ten minutes drive from the beach and yet would never actually access it if it wasn’t for this kind of organisation.

What was the challenge of filming in a place as dangerous as Lavender Hill?

Because we were doing this on basically no budget, we followed the guidance of people who worked with Waves of Change and only went into the area at certain times. It was just getting as much as we can really quickly and going really early in the mornings to minimise risk. But it wasn’t ideal. I shot it just over a year ago and I don’t know if I would be quite as brave to do it all again. 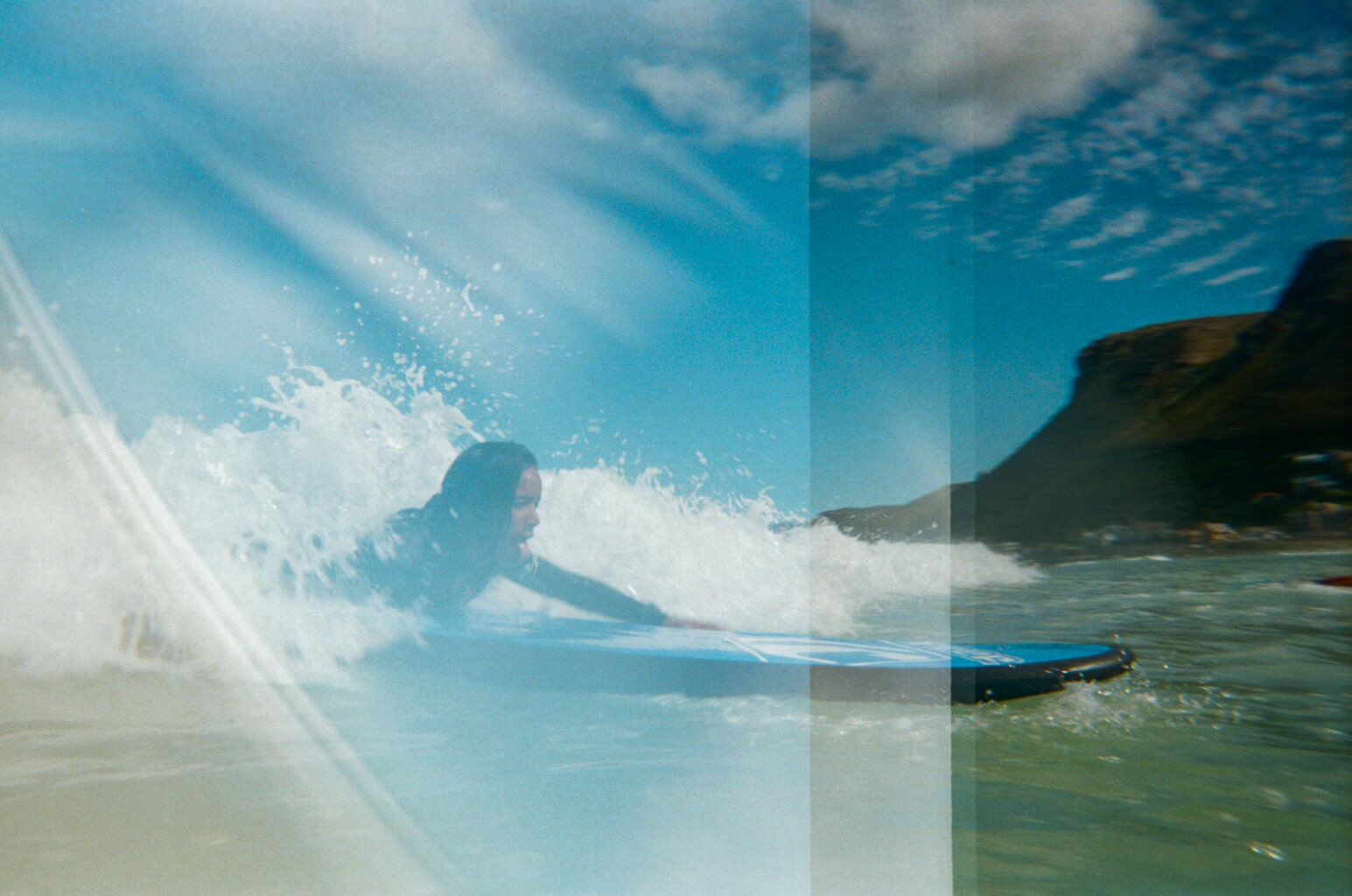 There’s also the challenge of filming in the sea. How did you get those up close shots?

I always try to play with the ideas of contributors filming as much as they can and having fun with cameras themselves. I gave the girls some underwater GoPros, which I strapped onto a few of their surfboards. Some of it is me, but the majority of what made it into the edit was GoPros strapped to them and seeing what came out.

Did you always want to present the film via voiceover as opposed to traditional talking heads?

This was due to the logistics of working with such young people. They were 12 or 13 at the time. I knew it was going to take quite a long time and had to be a very relaxed conversation. It was just all of us crammed into my car at the time with a zoom and some radio mics having really long casual conversations.

I always try to play with the ideas of contributors filming as much as they can.

These voiceovers are complemented by striking close-ups. Why did you want to use these kind of shots?

It was an attempt to make the film feel very personal and on their level, so you can really get to know these girls, see them up close, and take them seriously. I think young kids and girls are always dismissed, so I really wanted to put them in the spotlight and make them seen. 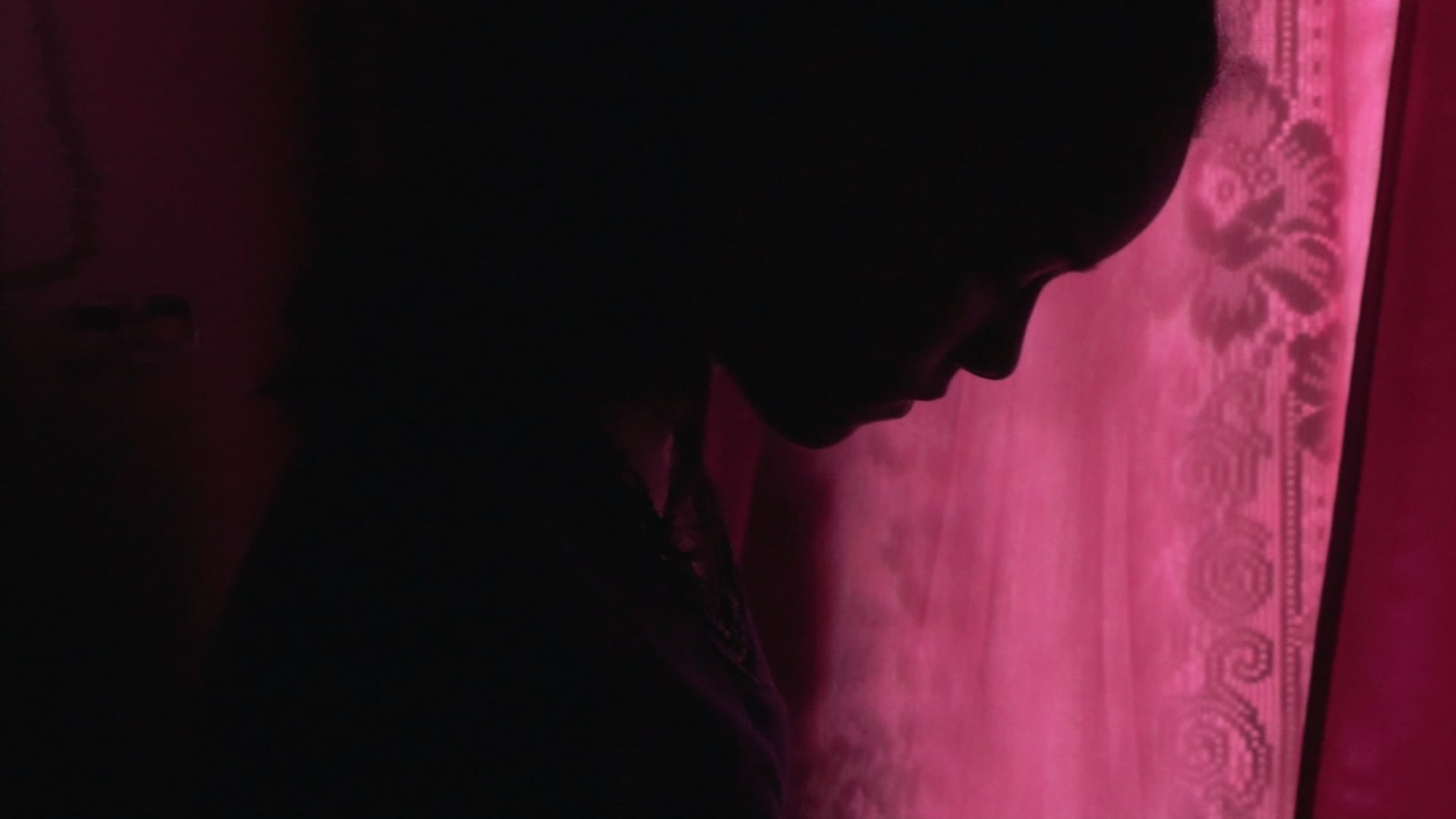 The sound design also helps to immerse us within the story. How did you think about it as a form of narrative?

With the sound design we wanted to take influence from the ocean and the sea. We were listening to the sound on the actual GoPros footage from under the ocean when the girls go under the waves. That weird clicking sound that you hear now and again is actually a bit of coral hitting itself under the ocean. So it’s something that exists in the world of the ocean, but the way we used it became something quite unnerving, almost like an alien insect noise. It was about trying to find something within this ocean world and using it in a way that made it feel uncomfortable.

The stories themselves are quite harrowing, with one striking tale of rape and dismemberment. What’s it like trying to process such horror and put it in a film?

It’s definitely difficult. It wasn’t the first time I heard that story when I recorded that interview. The first I heard it was maybe only my second time meeting the surf group. It was too windy to surf that day so they did a big talking circle. One of the coaches raised the issue that there had been this murder in the community. I was really shocked that all these girls, some at the age of seven or eight, had to process things like this, and these weren’t a one-off. I asked them if they wanted to talk about it, and they were willing to share. It was difficult but I discussed it with their parents, about how they would feel if these themes were raised in the film, and they were really on board with it as any sort of person trying to raise awareness around those issues was something they wanted to support.

Will you do any further work with NGOs with the film?

Yes. They used the film for a touring screening last year, trying to raise money for the organisation. They’re also about to launch another one that’s just looking for money specifically for the girl’s surfing program. They supported me during the making of the film and really loved it and hopefully it’s going to be a really useful tool for them, as, like with most sports, it’s still a little skewed when it comes to girls’ participation.

I think young kids and girls are always dismissed so I really wanted to put them in the spotlight and make them seen.

This film was made by your own company Wolfie Pictures. What’s the aim of the production company and what are you working on next?

Wolfie is my own company that I run social impact projects and documentaries through. I do a lot of work for the social impact arms of brands. Wolfie is a production company that I have to run projects like that through or projects that I can’t get any funding for. Up next is a documentary that flips the coin and looks at masculinity. It follows one young ex-offender also from Lavender Hill. He’s a young boy trying to turn his life around against an insane amount of difficulty: this is his journey talking about gang life and a possible way out.