You’re unlikely to see a documentary as strange as The Painter and the Thief released all year. Telling the story of a Czech painter who befriends a Norwegian man who stole her paintings from a gallery in Oslo, it’s a remarkable in-the-moment portrait of forgiveness, empathy and codependency. Employing a series of narrative sleight-of-hands that reinvent documentary form, it also keeps the viewer guessing right until the end. After its UK premiere at the London Film Festival earlier this month (where it won Best Documentary) we caught up with Director Benjamin Ree in his Oslo home to discuss ethics in documentary filmmaking, innovating with form and what ‘being personal’ really means.

You jump directly into the story after the paintings have been stolen? How did you get involved so quickly?

The story was on the front of all newspapers in Norway. I read about it in Aftenposten. I made contact with Barbora Kysilkova after she met Karl Bertil-Nordland during the trial. It always takes a bit of time to get access so I began filming Barbora first. I got in early and starting filming the fourth time they met. Before that I was fortunate enough to have a lot of archival footage. A friend of Barbora documented her art life, taking photos of every painting she made and filming the exhibition. We also had surveillance footage from the actual robbery and Barbora took an audio recorder to the trial as she doesn’t understand Norwegian.

I assume this isn’t allowed…

It’s not allowed. She kept the recorder hidden. There was a break, then she forgot to turn it off. When she handed in the audio recordings, she did not know their first meeting was actually recorded. It was very fortunate that we had the actual recordings of their first meeting and I think it’s just a great answer that he stole the paintings “because they were beautiful”. It’s such a lovely comment and such a weird meeting between two very seemingly different people. Also, Barbora made the courtroom drawings that we could use.

How you portray people in a documentary is closely connected to the ethics of it.

This isn’t the only film released this year featuring an Oslo-based art theft. Christopher Nolan’s Tenet also features a robbery scene! Is art theft a common occurrence in Norway?

Yes. I live in Tøyen, in Oslo. If you look outside [showing the scenery on his laptop], you can see the Munch Museum. There’s been a robbery there and also a robbery in the National Gallery. In Norway, Munch’s paintings, like Madonna and The Scream, have been stolen. When people talk to me about art robberies, I usually say that Norway has a great tradition of art robberies. 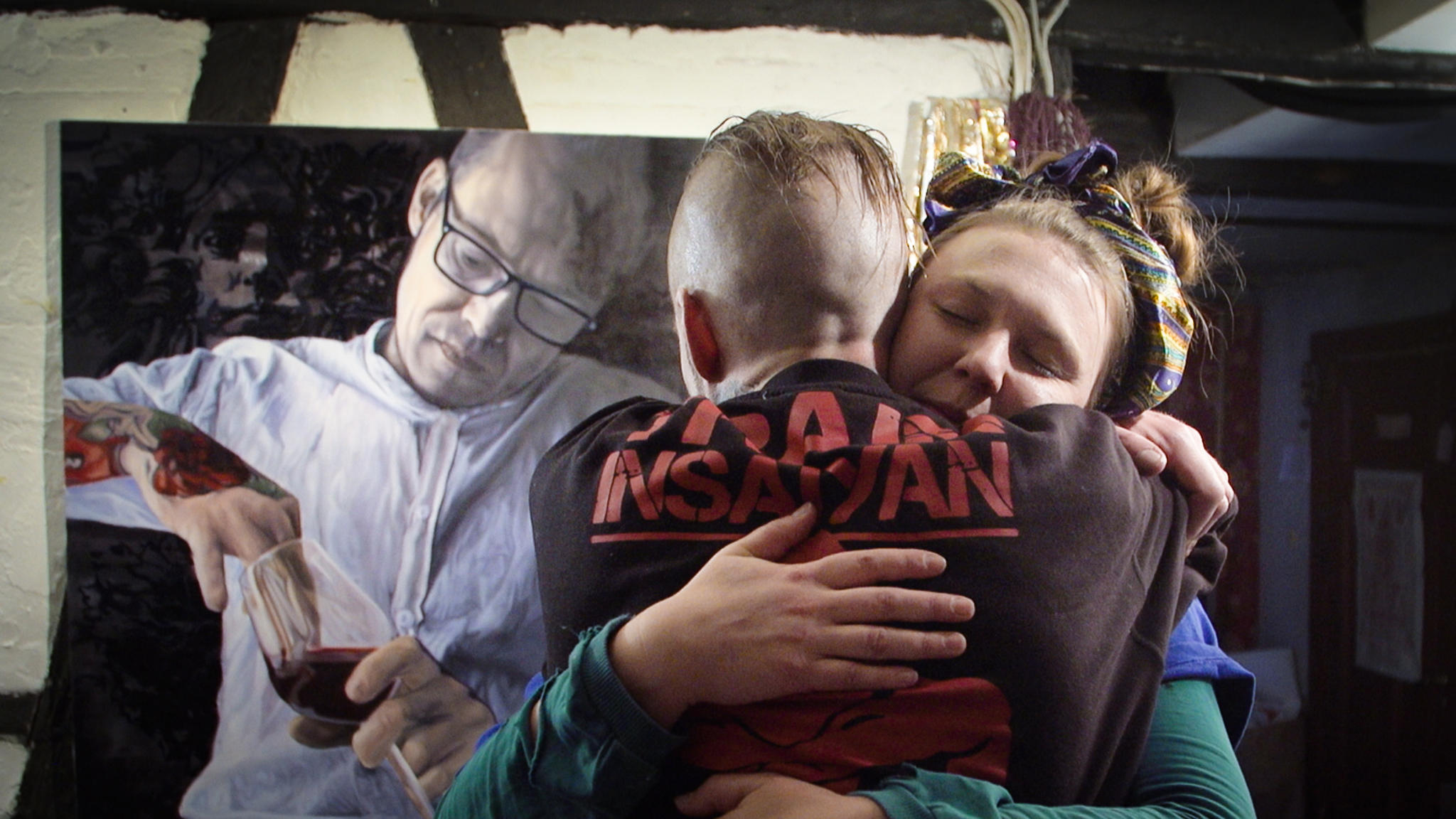 The title reduces its two subjects to archetypes – The Painter and the Thief sounds like something out of a fairy tale. Yet the documentary itself collapses these two ideas into something far more nuanced. Why did you want to keep the title?

All the news headlines called it “The Painter and the Thief”. I worked in journalism and, of course, you have the tabloid headlines. I think that it’s a good way to begin the film too; to not know that much about these people. I thought that the way to do that was to have that kind of title. So you go into the film thinking that it’s going to be superficial, like a true crime film. Then it’s like a map where you open a new part of the map every time. Those are the stories I love; going in having an idea of what the film might be then it ends up being something totally different. Also, the title is easy to remember and a bit catchy.

The film also plays around with documentary form, jumping between perspectives and time. Why did you want to tell it in this way?

There are two reasons behind those choices. First of all, dramaturgy in a documentary is not only an artistic choice, it’s also an ethical choice. The impression the audience gets of Karl Bertil and Barbora is something they have to live with for the rest of their lives. I really wanted to portray Karl Bertil as charismatic, intelligent, dark and funny, to really show his complexity and get to know him. I thought the only way to do that was to show the world from his point of view. How you portray people in a documentary is closely connected to the ethics of it.

I think that if you have a unique story, you need a unique structure and form.

The reason we jumped back and forth in time is linked to what the film is really about. The film is about what we humans do to be seen and appreciated, and what it takes for us to see others and help others. An important step of the film is to really find what this is about. I’m asking this as a question, as it’s much more interesting to explore a theme with a question instead of a statement. Then it was very important for us to see the world from both point of views: how Barbora uses Bertil and how Bertil uses Barbora. I think that if you have a unique story, you need a unique structure and form. There have been so many films about an artist and a muse, and unlikely friendships. We tried to find a form that fits so the story could stand out.

The revelation that Barbora has also been tracking down the second thief comes quite late in the story, which is information people could accuse you of withholding. What do you say to a documentary purist who says you should’ve revealed this information upfront?

The Painter and The Thief is self-reflective in a new kind of way. When Barbora walked up to Karl-Bertil and asked if she could paint him, she interfered with his life in such a way that we don’t know what would’ve happened if she hadn’t. So the film explores how art affects real life. This is something we play around with, using this structure and withholding information, to hopefully make the audience think about the filmmaking process.

I don’t have the answer to what would’ve happened if we weren’t there with the camera. Being there with the camera influenced Barbora and her choices to find the paintings. I think it’s important to withhold information so it becomes a new layer after layer, but also trains a muscle in the audience so they don’t just passively watch but become a bit more critical of the filmmaking process. Hopefully, it will be intellectually stimulating and they’ll ask themselves: “Who are the people that have constructed the subjective use of the two main subjects, and how did their involvement affect the filmmaking process?”

That’s what’s great about documentary filmmaking. Every documentary film is self-reflective in a way. I wanted a film that tries something new that I haven’t seen in this kind of observational documentary before. That’s a very challenging and fun thing to try out. Then it’s up to the audience to judge if we’ve succeeded or not.

You are a part of the film but you are standoffish throughout. Why didn’t you get personally involved so it could’ve been The Painter and The Thief and the Filmmaker?

That’s not necessarily the spoken word. I need to dig deep into myself to try and find the same kind of emotions. In that way, I’m very present in the film, but in a way you don’t normally see in documentaries. Of course, I could have a voiceover narrating the film, but I wanted to try something new. I think it’s done too many times with voiceover. Again, this film is like a painting in that you only see certain parts of what you show. That also makes the audience think about what you don’t want to show and that goes back to the way that we wanted to activate the audience.

I wanted a film that tries something new that I haven’t seen in this kind of observational documentary before.

When you were filming over these three years, did you have any moments where you were in the middle of something and you had to drop everything and rush over to capture a certain moment?

That happens a lot. I had to cancel a vacation in order to film for example. When Karl Bertil crashed the car, I had to get the shots of the car immediately. We were very fortunate in that as we got access to prisons and hospitals. It’s a lot of work, but we all believed in the project, so we got that kind of access. That made it possible to film Bertil’s first steps after the accident, an important scene to have in the film.

He has tattoos all over his body. She takes inspiration from him and uses him for her work. As the film goes on they become more dependent upon each other for emotional support, making them both painter and thief. What would you say to that?

That’s a good observation. Both can be said to be either painter or thief. The film shows what they take away from the friendship and that is something that I think is difficult to put into words. That is why I made this film because they had this great chemistry but also wanted something from each other. What was that exactly? I really don’t know. But the film is using the observational form to try and show this really intricate and complex friendship between these two people who I thought were very different people in the beginning, but then were very much like alike towards the end.

You can read all of our London Film Festival coverage here.