Easily one of my favourite films from this year’s London Film Festival was Bill and Turner Ross’ Bloody Nose, Empty Pockets – a Cassavetes-style take on the closing night at a Las Vegas dive bar. The Ross Brothers track the celebrations in a fly-on-the-wall form of cinéma vérité which delights itself in the lives of the bar’s patrons. It’s a work which captures the unique atmosphere of a bar filled with a bunch of misfits, each as entertaining to watch as the next. We’ve long been fans of the fraternal filmmakers’ approach to documentary having first spoken to them back in 2009 about their hometown debut 45365 and again in 2012 for late night New Orleans adventure Tchoupitoulas, and so absolutely had to get them back on our pages to talk about the making of Bloody Nose, Empty Pockets, detailing how they achieved an honest portrayal of people on the fringes of society.

How did you decide on the aesthetic of the bar, what were you looking for The Roaring 20s to evoke?

We wanted a bar that told a story – a bar that was a character of its own. In the end, The Roaring 20s hit most of the marks. It was a lived-in and womblike space that offered a reprieve from a harsh world, an unassuming door in a strip mall parking lot that leads to an alternate reality.

We wanted a situation and a place that were both unique and universal.

What interests you both in telling stories cinematically through a cinéma vérité, fly-on-the-wall style?

We often start with an idea, with a series of images, with a theme or a moment – and then we work out the best method by which to achieve it. In this case, we wanted a situation and a place that were both unique and universal. We wanted a cast of characters who could speak from their own experiences while also being representative of others. We wanted to create a dynamic situation in which anything could happen.

What did preproduction look like? What did you have to plan ahead of shooting?

Because we wanted the situation to play out organically we had to spend a lot of time thinking about set and setting, about the alchemy of casting, about the intricacies of recording audio in a bar on a long night with twenty-some souls and a lively jukebox. The better we prepared, the more present and unobtrusive we could be in production.

Through trying to generate that feeling of an organic moment, was there ever a fear that it wouldn’t arise?

The fear of failure is a healthy motivator. We knew something would happen, and we knew what we were looking for, but we didn’t know precisely what would go down, or what surprises would shift our perspectives.

The better we prepared, the more present and unobtrusive we could be in production.

How loose was your preparation with the cast in terms of what you both wanted from them?

We prepared everyone in advance, making sure they understood the approach and what we were looking for. We were there to help and to guide if necessary, but otherwise just to provide the situation and be present for it. The burden was on us to mine the material. Anything overly performative immediately felt inauthentic – this is generally true of vérité shooting, if you don’t feed it, it will go away.

So, would you say your direction to them is on a much broader scale as opposed to trying to curate any specificities in their performances?

The majority of the cast are non-professional actors. They are basically playing versions of themselves, whatever they chose to bring to the experiment. They are only ‘directed’ in the sense that we provided a controlled environment and its stimuli. They are, for the most part, responding only to each other and the situations that emerge from the scenario. We primed all the participants in advance with the basic structure of the idea and their places in it. Beyond that, we let it rip.

I read that you approached them with arcs for their characters, how did you get the actors to focus that into their performances?

We tried not to bog them down with imposed ideas of arc and character development. We wanted them to be alive within the space, free to respond to the situation and each other, to make the experience their own. The onus was on us to pay attention, to be attuned to what each person was going through, what the group was going through, and how the narrative was unfolding. While we certainly had preconceived ideas of what might transpire, we ultimately had to be available to the detours that naturally emerged. 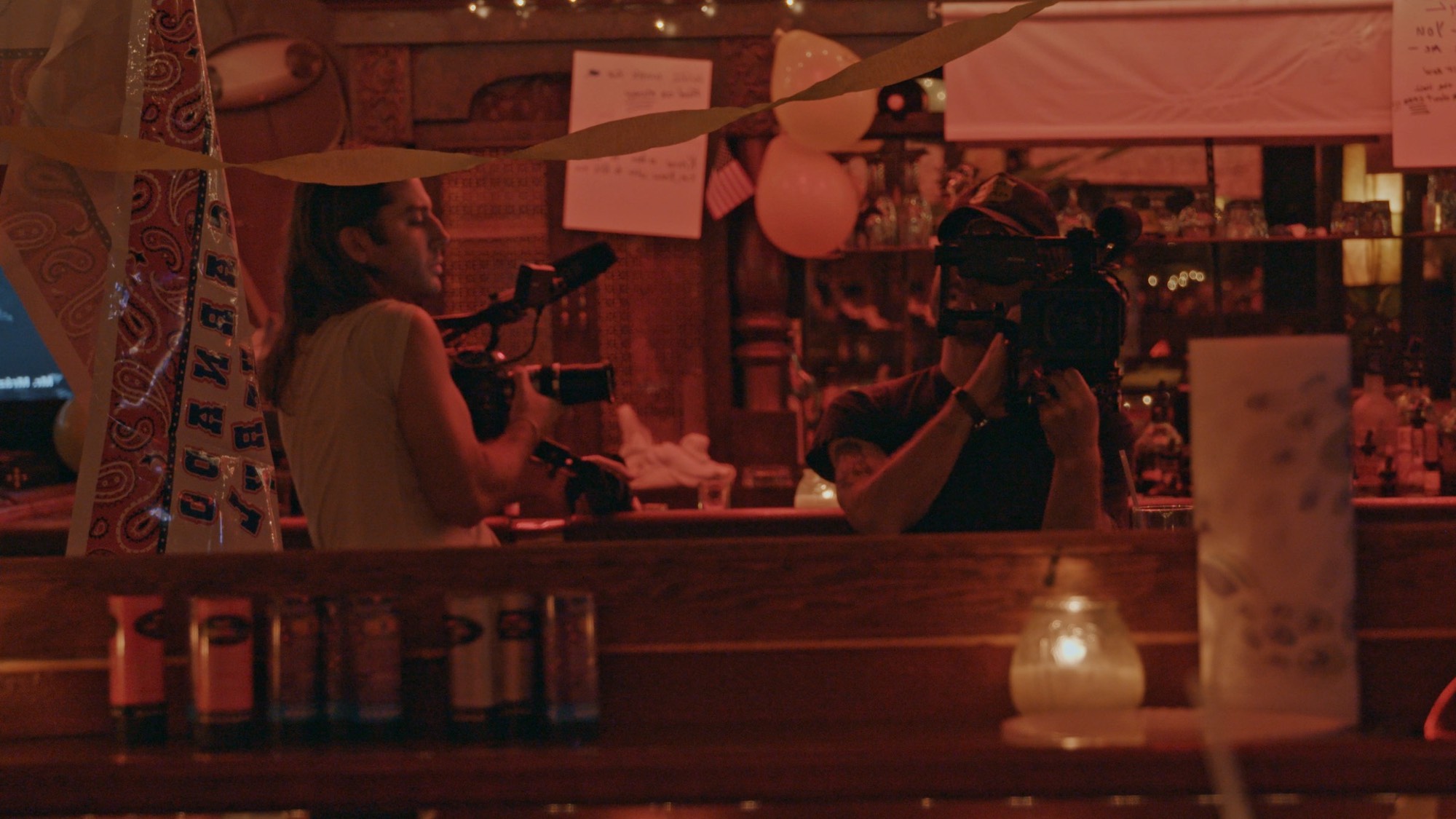 You shot the film in New Orleans, and Vegas is only mentioned in a couple of times, was that part of subtly immersing the audience in the location and not drawing too much attention to the created space?

Vegas provided the frame for our portrait of chosen family. In a symbolic sense, it’s the fantasyland outside the doors of our own fantasyland – an oasis within an oasis. In a literal sense, it is the created space in which our created space resides.

I wanted to ask about the use of music and the title cards too, to me they break the film up but it also gives the scenes a cinematic feel, what was its purpose for you both?

To do just that. To provide a breath, an escape valve, a new thought on which to pivot.

Have any of the ‘patrons’ seen the film? What did they make of it?

Yes, they have. Some at Sundance, some at Berlin, some at our cast and crew screening back home in New Orleans, some from laptops in quarantine. Each has had their own unique experience.

And last, but not least, what can we expect next for the two of you?

On to the next one.

You can read all of our London Film Festival coverage here.