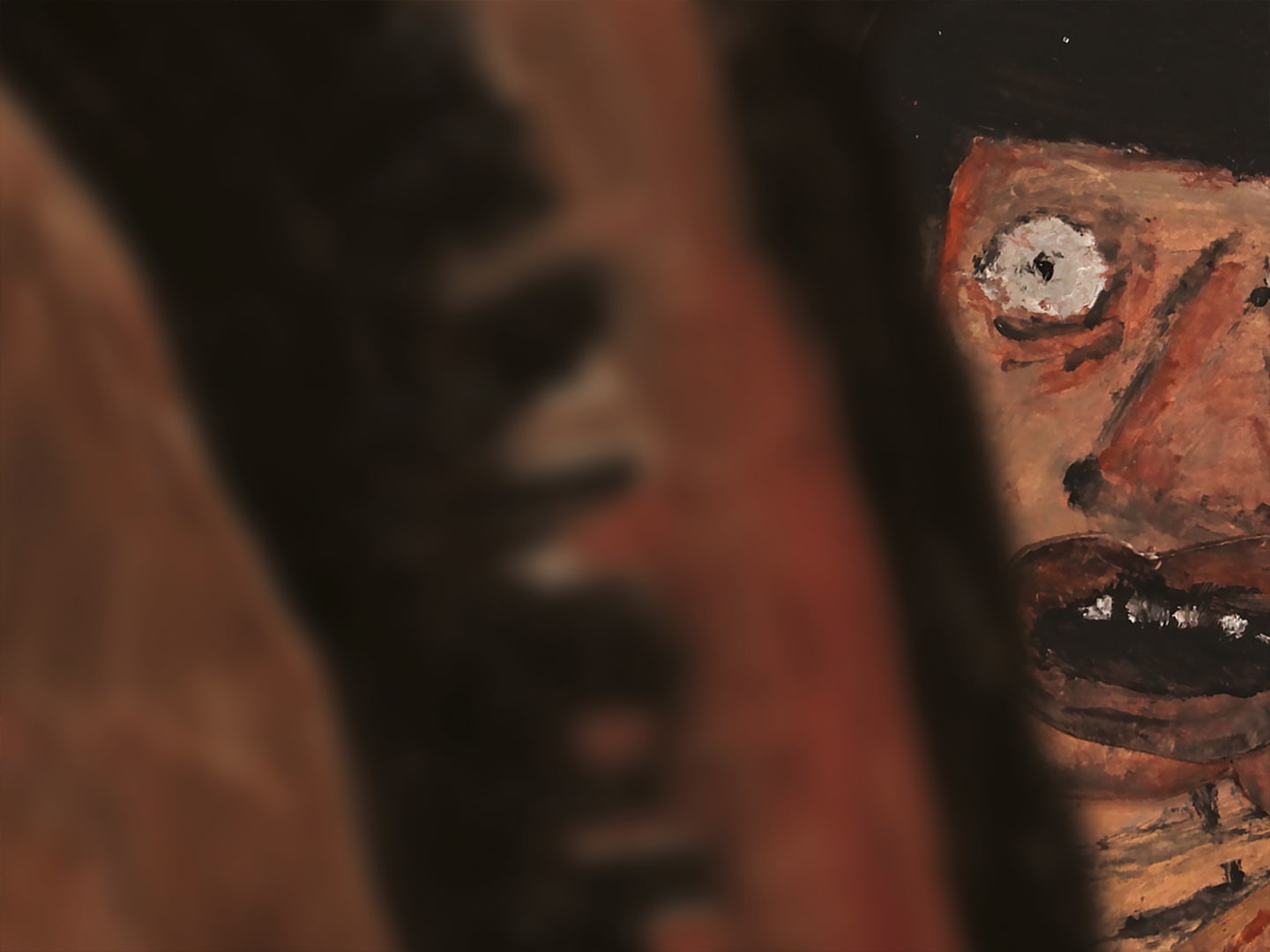 Here at Directors Notes we’ve never shied away from featuring challenging work, in fact our love for the alternative, alongside a desire to share it, has been a key motivator in all that we do. With that in mind, it’ll come as no surprise that today’s pick – Ollie Magee’s Royal College of Art film Nod. Wink. Horse. – is a personal favourite of mine. A 5-minute animation that asks its audience to reexamine its preconceptions of narrative, forget the classic headscratcher ‘if a trees fall in wood…’ and ask yourself this:

If a story is obscured by a horse, is it still a story?

The synopsis for Nod. Wink. Horse. reads – ‘A film behind a horse. Obscuring the narrative. My act of self-destruction’ – the first two statements there seem apparent from watching your film, but do you feel this was a risky film to make and if so, what compelled you to take such a chance?

I think taking risks is about being honest with yourself as an artist and taking those decisions that reflect who you are in that moment. And I’ve found accepting what happens beyond that can be difficult but cathartic. For me, at the time, it was about embracing those self-destructive habits as a filmmaker. Self-doubt and compulsive tendencies.

I can’t imagine the horse not being there.

Obscuring the film with a horse was an expression of that, and it became part of the film’s wider narrative. Actually, I can’t imagine the horse not being there. It’s absurd and a little anarchic but in the end, it’s the only film that it could have been. So, when you reach a point where you can’t imagine any alternative, I feel like that’s an honest film.

There are a lot of questions running through my head after watching your film and I’m not sure if you’ll have an answer to this, but I feel obliged to ask…why a horse?

In the very first draft of the film script, before any notion of covering up the film, there was a horse that was a key character in the narrative. But as I tried to wrangle this early script, the horse became more and more irrelevant. Despite suggestions to do so, I couldn’t bring myself to axe him from the film and he became this obvious burden to the story. So, granting the horse centre stage, having him get in the way and ‘ruin’ the film, I was sort of letting this character – that I really l loved – win, in spite of the rest of the film. 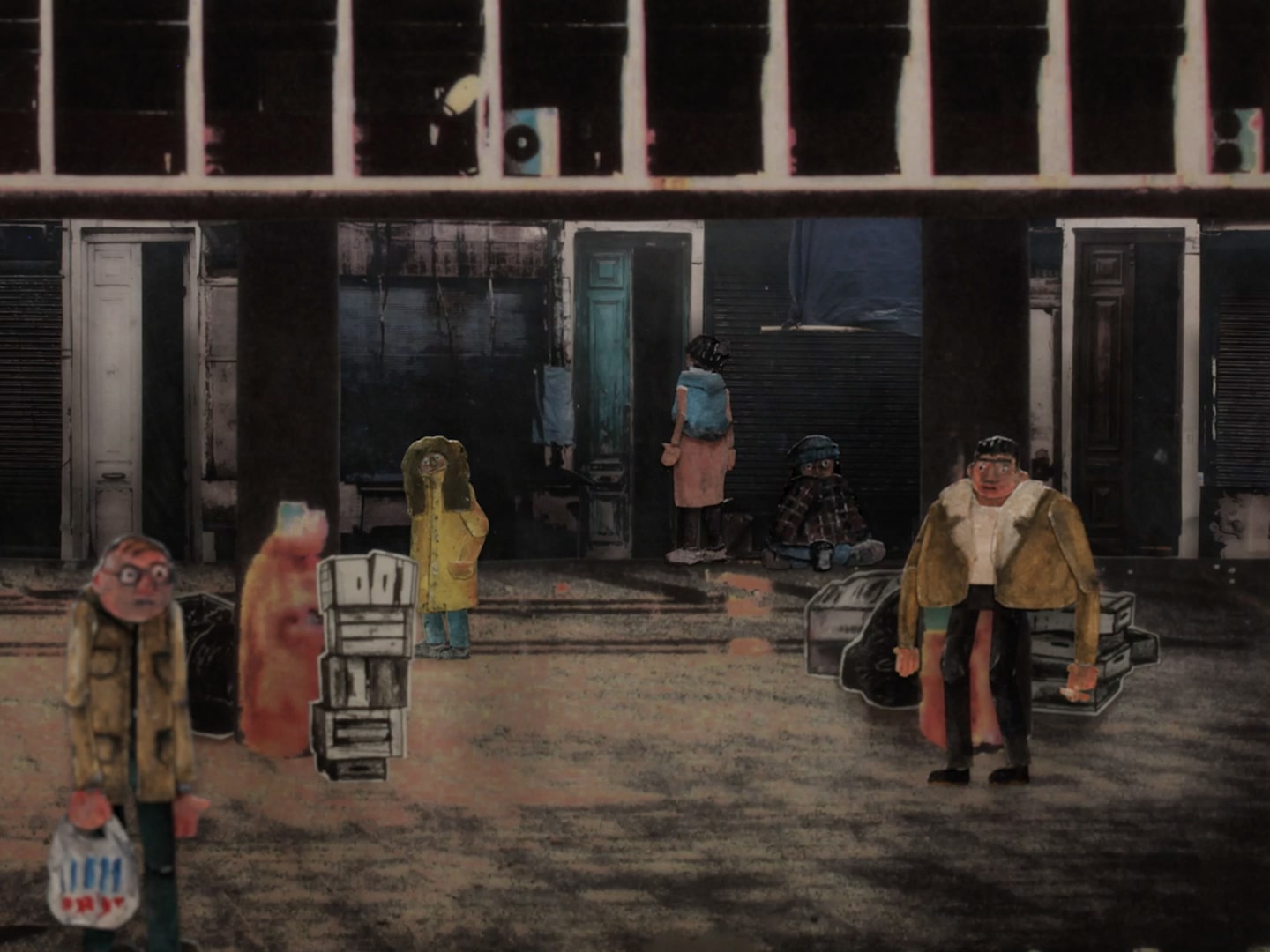 Your film reminded me of that old philosophical thought experiment – If a tree falls in a forest and no one is around to hear it, does it make a sound? – but with horses and narratives! Does the story behind the horse exist and if so, what can you tell us about it?

That’s an interesting analogy. Who’s to say there’s anything back there. Or if it’s even worth seeing. I could claim anything! For the record, there is a narrative playing out behind the horse which involves a kitchen porter, a hungry dog, and a belligerent drunk. But I won’t say more. I like the ambiguity of it all.

What I find interesting is that it becomes irrelevant as soon as it’s hidden. Then the narrative shifts to be about the film itself and its wider context. You can’t process any of narrative before acknowledging that there was a big horse in the way. And the rest is in your head. 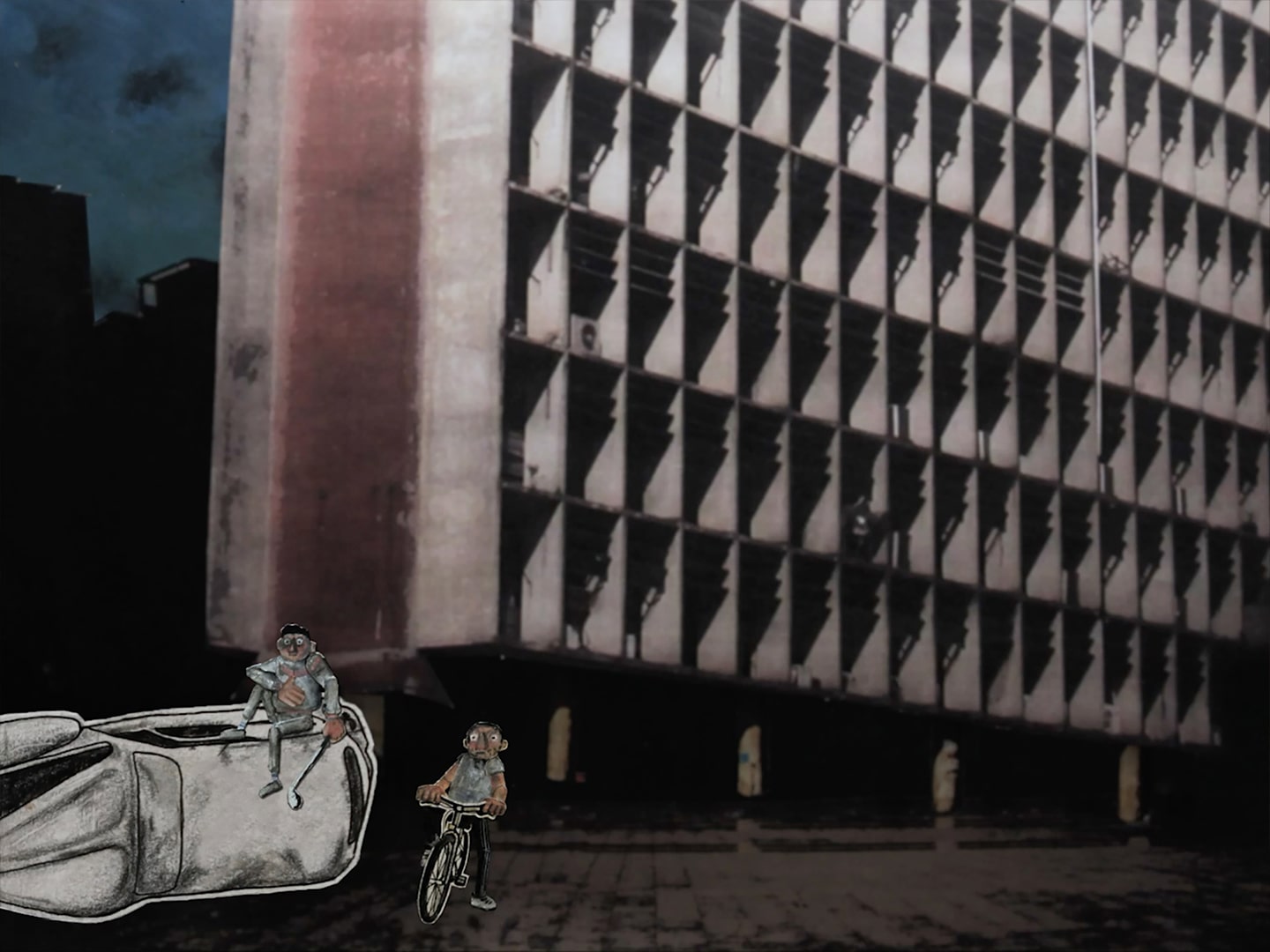 With that in mind, Nod. Wink. Horse. doesn’t feel like a film that encourages you to just sit back and enjoy, but a film that provokes you to think about the filmmaking process and storytelling, what are you hoping an audience takes away from a viewing of your short?

There is that idea of Brechtian alienation, where the audience is purposefully pulled out of the story, to become observers of the piece as a whole. There’s a lot there to be said in terms of where the audience gets placed in the filmmaking process, but I hope this film might provoke an audience to question their role and relationship to the filmmaker.

An audience has its own agency and ultimately decides the content.

Rather than being a receptacle for story, I see the audience having a bigger part to play in any film’s existence. An audience has its own agency and ultimately decides the content. I hope my work can elicit some of those conversations.

Leaving the unusual premise behind for a moment, let’s talk about the aesthetic for the film, what was the aim of the visuals? There’s an almost “grubby” look to it that feels well-matched to the gritty urban setting, were these things that crossed your mind when creating your short?

The setting and aesthetic mostly reflect my experience of living in London. I’m oddly drawn to run down, derelict things, and the stories they tell. I wanted the film to be tactile, real locations with depth, that way the horse was somehow more frustrating.

Even the narrative with the poor dog is a reference to a foggy memory.

Inspired by likes of Paul Vester and Run Wrake, I started printing my old photos and creating collages. Then these odd characters I crossed paths with made their way into the film. Even the narrative with the poor dog is a reference to a foggy memory. It’s almost like a scrapbook of those few years, and I suppose that grubby aesthetic is part of that.

You created the film while studying at the RCA – what can you tell us about the production? How long did it take, what techniques did you use?

I was lucky to have access to the multiplane studio at the RCA for the production. It’s a cold, dark, basement room where I was locked away on my own for about 5 months. The isolation did start to affect me and the room itself crept into the film, as the ambient café sound in the film is actually a recording of the studio.

It was my first foray into stop motion, and I really enjoyed the process!

The entire film was animated on Clive Walley’s huge old multiplane. Backgrounds are my own photos, printed, cut out, and collaged. Characters are oil painted paper puppets. And 2D effects like smoke, and the horse were painted on cell. It was my first foray into stop motion, and I really enjoyed the process! I also want to thank some RCA friends that helped on the production, David Crump, Ciara Kerr, Dermot Lynskey, John Summerson and Dimitris Armenakis. 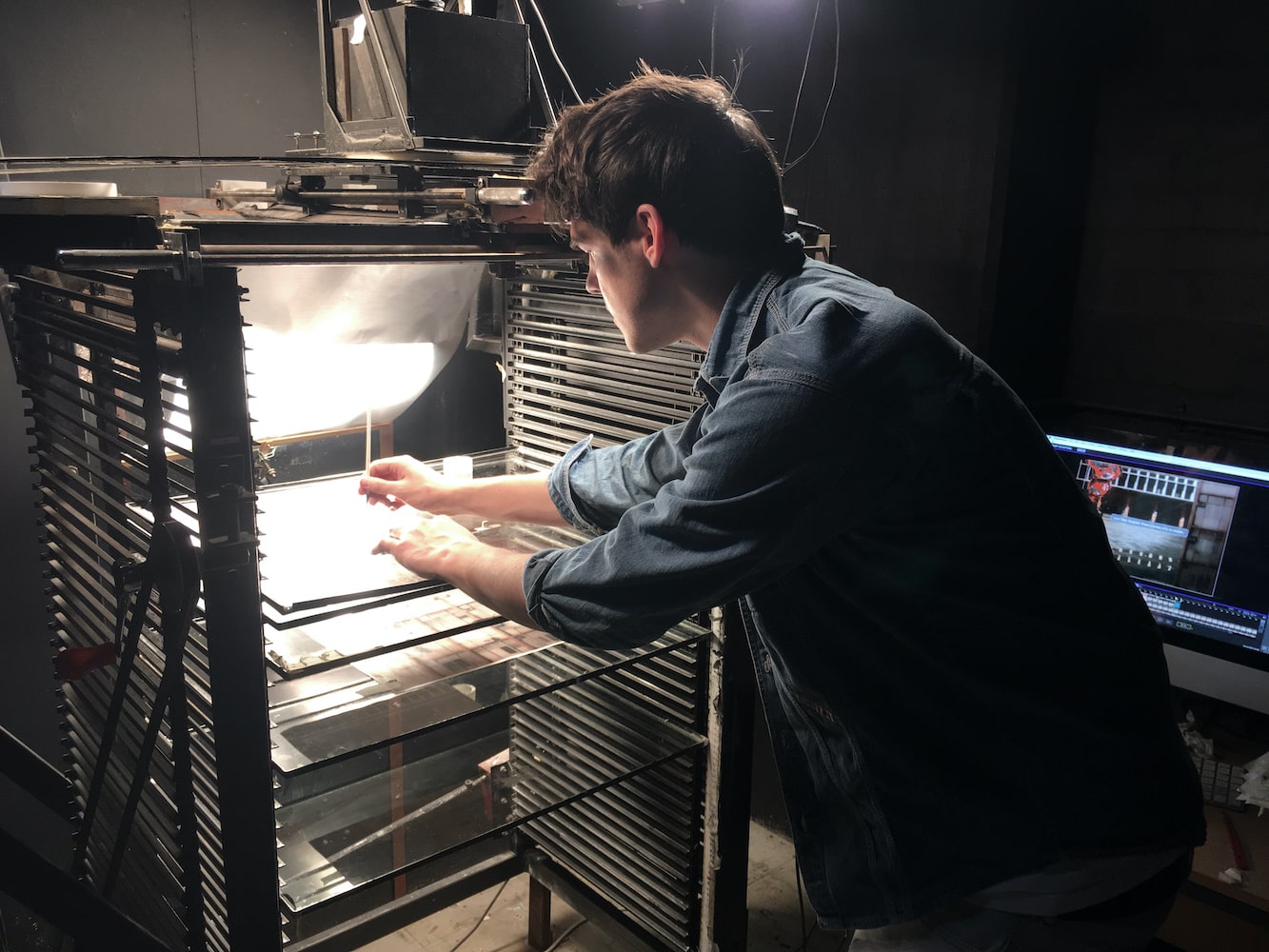 What’s next for you? Any upcoming projects we should know about?

Not much on the horizon for me. This year has been a write off for most of my personal work. I plan to move to Germany which is the only concrete plan at the moment. With a new environment and some old friends there, my hope is to revive some of the energy and creativity that has been worn away after a difficult year. Perhaps develop some of my ideas that currently exist as comics or illustrations into something more resembling a film. Familiar ideas exploring the relationship with my own work.