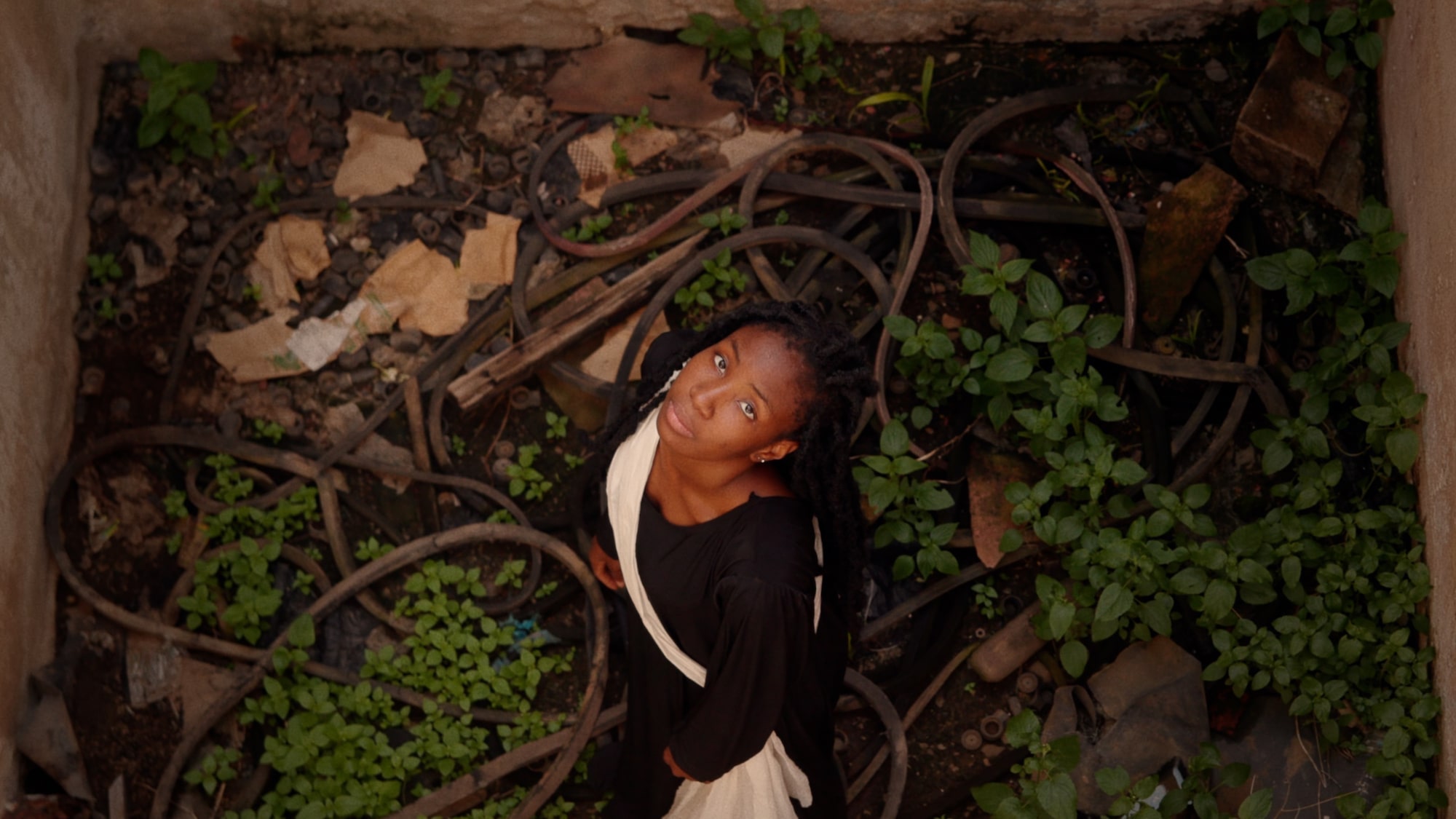 The film starts with a Wilhelm-like scream that seems to pierce the sky. Acting like a siren, this woman in black calls men from all over town to join her in a dance of madness and possession, inspired by the Baju tribe. Captured on a combination of shaky cam and smooth drone footage, their movements are frantic and powerful, eventually converging in an abandoned textile factory in Kaduna. A collaboration between Jacob Jonas The Company – who we have featured a few times previously on DN as part of the Films.Dance series – the Nigerian Mud Art Company and New York-based choreographer Shannon Gillen, Ridwan Adeniyi Abdullateef’s Matakiis a striking clash between chaos and control, instinct and domination. We invited Abdullateef to talk to us about the challenge of working on initial rehearsals over Zoom, having a working edit from the initial in-person walk-through and the difficulty of balancing his vision with that of the dancers.

How did the Mud Art Company get involved with Jacob Jonas The Company?

The Critics Company already has a good working relationship with Jacob Jonas The Company. We made our first film together last year. They reached out to us on Instagram and instantly we got hooked and started talking about collaboration and art and sharing. It’s been wonderful since then. This dance was especially choreographed by Shannon Gillen of VIM VIGOR. The super-talented team of dancers Ochai Ogaba made this come to life. This was done online on Zoom, with several weeks of training and rehearsals, and it was beautiful to see at the end of the day.

Our Mud Art Company is an indigenous dance company here in Kaduna, where we live. One particular thing about this dance form is that it’s very different from the usual dance that we know around this part of the world. They have a very unique way of expressing themselves. I got really drawn to their form of art.

I loved the use of these abandoned locations. Can you walk me through the location scouting?

Before trying to get the location for this dance film, I had to be part of the rehearsals. After watching the dance, I started to think of wide spaces, somewhere without a lot of obstructions. Our houses and spaces here are built in a very small way, so we needed a big space. We looked for workshops, dance theatres, we even went to the stadium here in Kaduna, because there are some indoor areas that are wide enough, but that didn’t work. So we had to try this textile place in Kaduna that’s been abandoned since 1992. We went there and it looked beautiful immediately, with sunsets in the background. It’s very spacious, not too noisy. The abandoned warehouse was like the icing on the cake for us because it helped to put the busy story together in the way that we envisioned it from scratch. 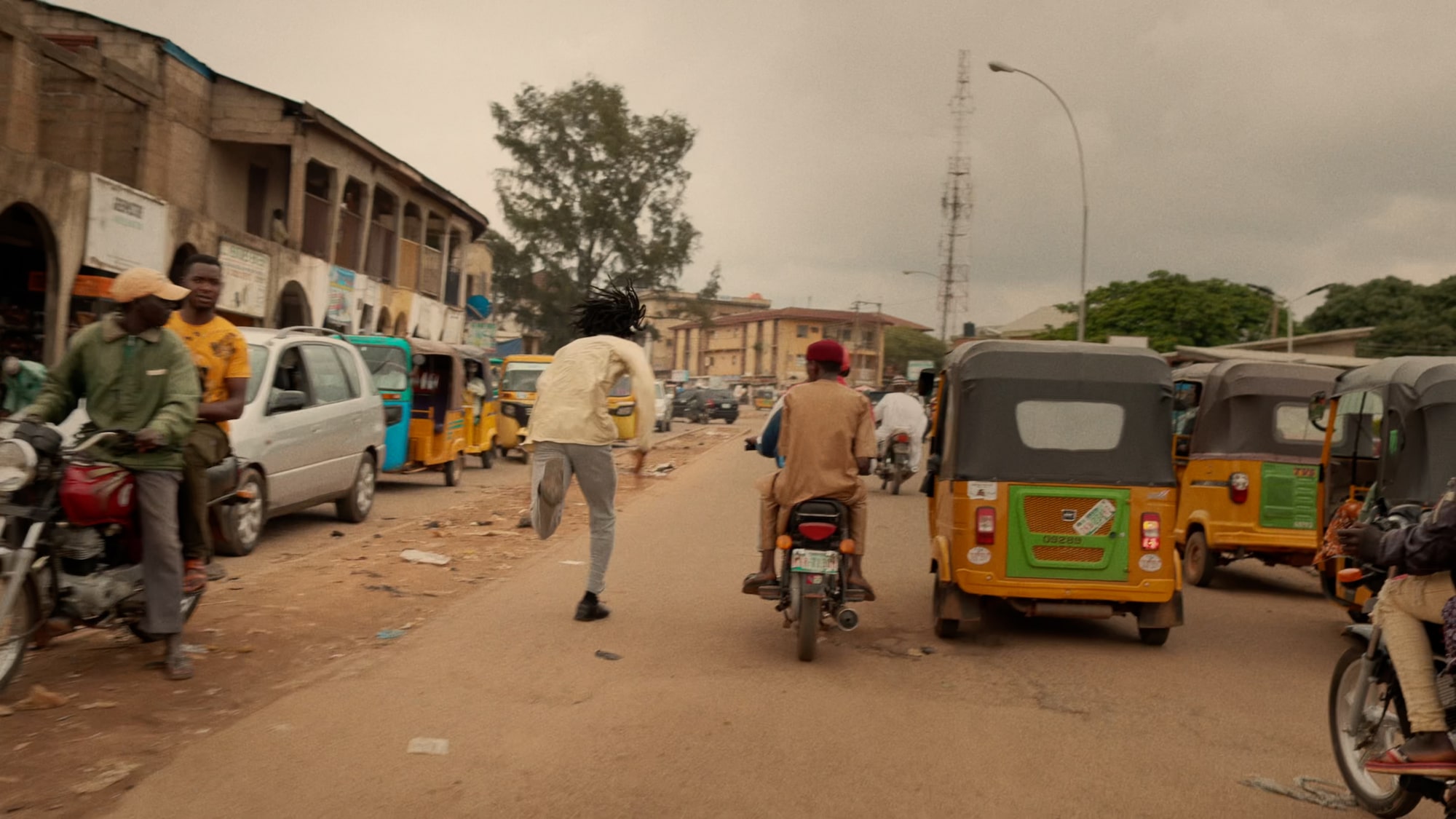 It feels like the dancers are being possessed by the lady in black. How did you want to bring this feeling across through the dance and directing?

To bring this feeling of our dancers being possessed by our special goddess, I had to work closely with our super talented Cinematographer Raymond J. Yusuff, who has his own technique. We worked together very closely and figured out ways to move the camera to still keep the eyes of the audience on our characters. Our dancers are professional dancers who had long forgotten this art form because, of course, they needed to make a living through other means. They go to their various walks of life — the carpenter, the wheelbarrow pusher — and do all these different things, but then this lady summons them.

I used to think that working with dancers would be very smooth and easy but it’s really challenging.

I had to make her scream. Screaming is something that grabs our attention. Whenever someone screams you always want to see what is happening or run away from the scream, because, of course, you are afraid. So I wanted this scream to be the centre of it all that draws everyone back to this art form. To do this, we had to use smart camera techniques, with super smooth transitions and a lot of shaky, shaky shots. 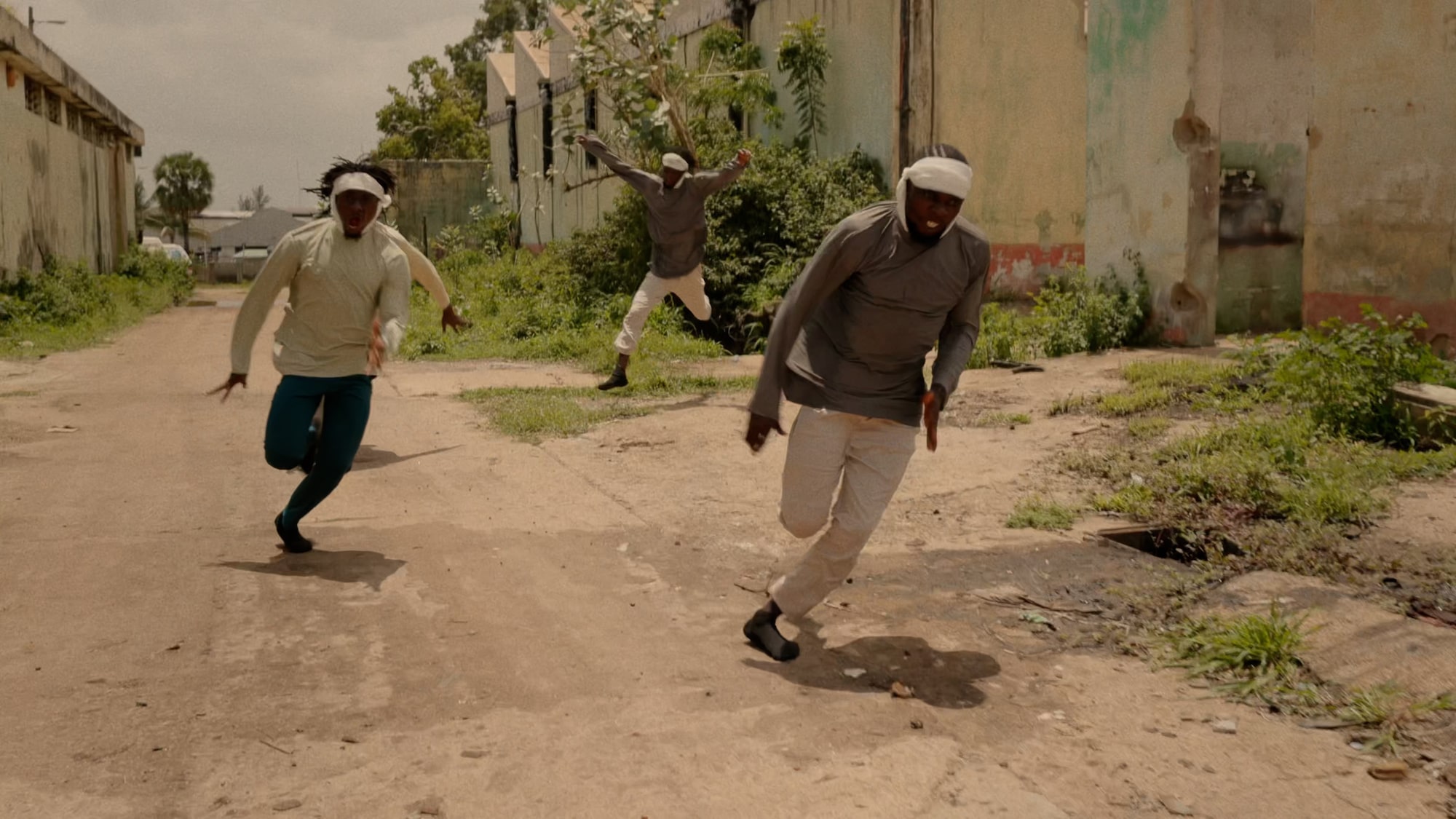 How did you work with the dancers to bring this sense of madness across in movement?

Working with dancers is actually one of the most difficult things I have come across as a director. I used to think that working with dancers would be very smooth and easy but it’s really challenging because apart from the fact that they have choreographed this piece, they want to see exactly what they have choreographed in their film. So the challenge for me as a director is to try to explain to them and to make them understand that this is a whole film and that they are part of the film. To do this, I had to be part of the rehearsals with Shannon on Zoom. Then we had two other rehearsals before shoot day. I wanted them to have their original idea, then we come to set and see what’s practical and what’s possible.

There seems to be a series of hidden cuts in the film, for example when you see the lady in black at first in the distance, but then we see her close up after you pass through the wall. Were there any difficulties in achieving these shots?

So when I chose these shots, we had to practice over and over again to get it right. We had three to four days of our own camera rehearsals, so on the day, it wasn’t difficult, it was very smooth, it was practical, and we really enjoyed it. So I would say that it wasn’t very difficult because we had all practiced. While directing or working I’m very spontaneous, I love to make things happen just there on set. But for this production, there was no spontaneity. Everything was planned right from scratch. In fact, we had edited the whole thing before we shot the main film. We shot the rehearsals and had already edited what we wanted to see in the film. So when we shot, we already knew what we wanted to see.

There seems to me to be a clear contrast between chaos and control, as represented by the mixture of handheld shots and drone footage. How did you work on this, as well as the editing, which feels quite freewheeling!

Exactly, I love the word freewheeling! For the editing, Raymond Yusuff is the master editor; brilliant and very talented with his artwork. So I trusted him with the edits for the first cut and even for the later cuts. He got the footage and I asked him to butcher and do what he felt is the best for the project. He already understood the direction of the project, where we wanted to take it to, so it was left for him to give it that magical touch.

The bird’s-eye view gives us the stability that shows that these guys are just humans.

The chaos is the result of human activity; what we would normally see around us. The running, pacing, panting and all of that, while the drones help to show the stability in the sky. So you have these stable shots that show that view and we can clearly see all our actors together. The chaos you see from below makes them feel really very powerful, especially with the angles but the bird’s-eye view gives us the stability that shows that these guys are just humans. So you have a goddess controlling everything but still, there’s like a supernatural being from the top who is seeing them. 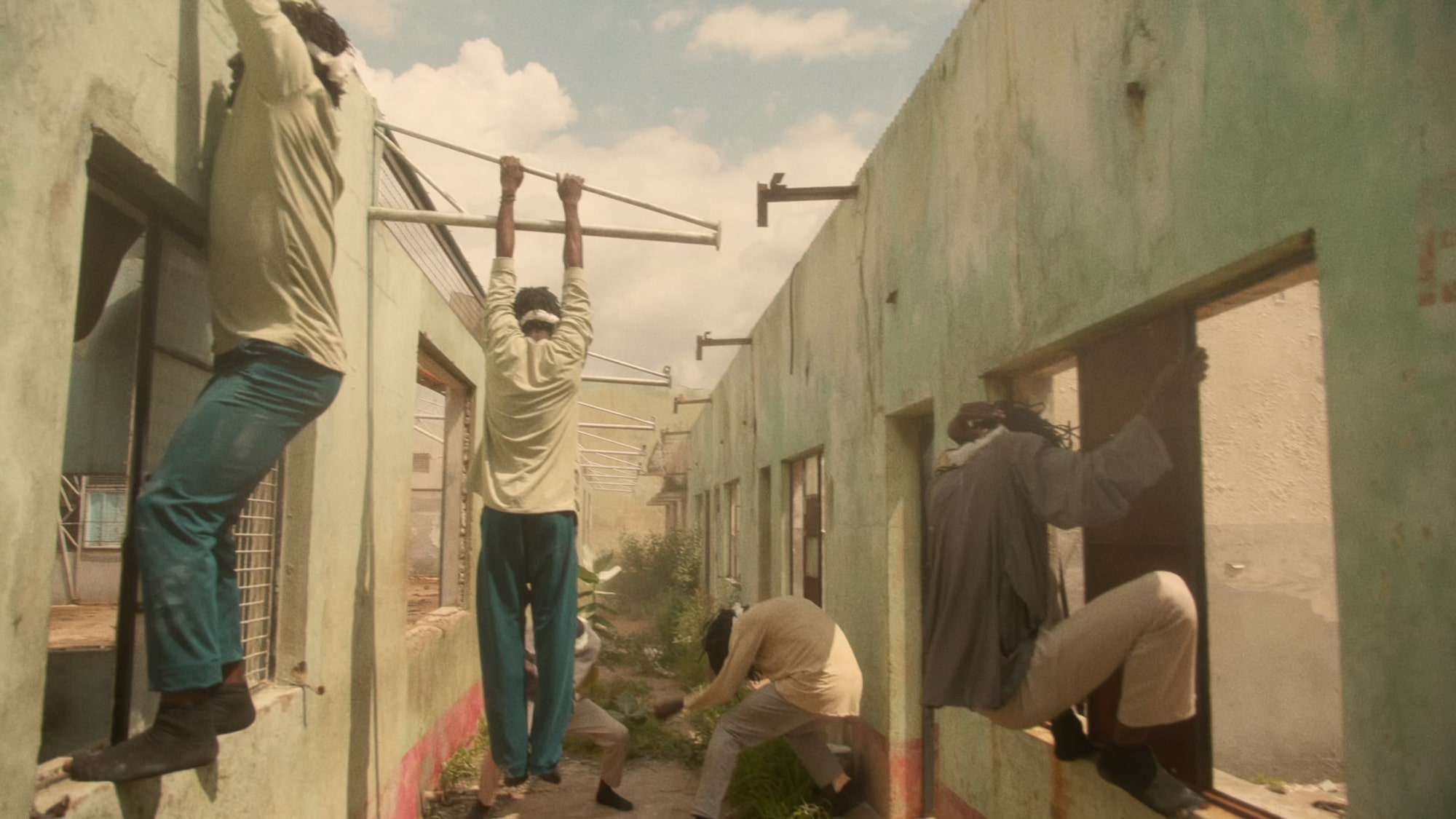 I’m working on a documentary series, which will be set here in Kaduna. I’m also working on our next short film, which is a futuristic, robots-everywhere kind of film!